To draw people in, build bridges instead of walls 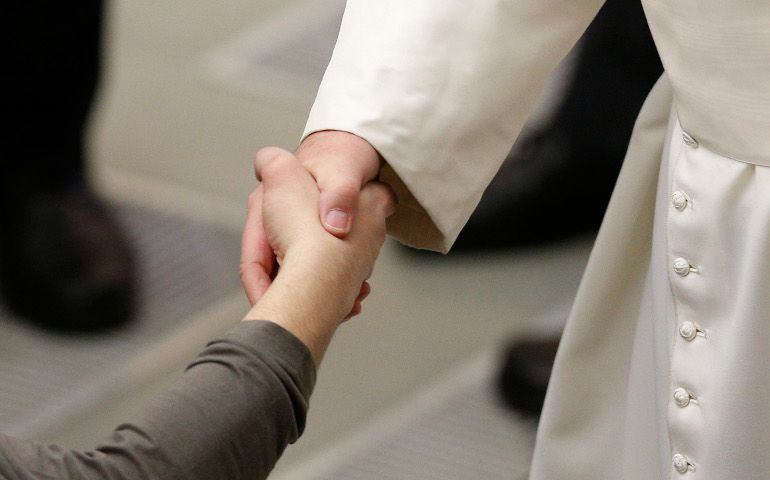 Pope Francis shakes hands with a man during his general audience in Paul VI hall at the Vatican Jan. 11. (CNS / Paul Haring)

Over the past four years almost, as Pope Francis has been the Bishop of Rome, we have discovered at various times how he does things that seem sort of out of place for the Holy Father or the pope. He surprises us in many different ways. In fact, the very night he was first introduced as the Bishop of Rome, he made it a point to say that — “I am the Bishop of Rome.” He meant no longer was he going to emphasize that he was the supreme pontiff, but rather a bishop among the bishops, the way Peter was.

But then after that, he went on to do various things that sometimes shocked us, surprised us, like he kept insisting that the church has to be on what he called “the periphery,” out on the margins. It can’t be closed in and comfortable. The church always has to be going out to where the poorest people are and be among them. He used the church as an image; he said it should be like a field hospital, taking care of people and everybody, not turning anybody away. Just recently when he was celebrating his birthday (you may have heard this), instead of having a big banquet with notable people — the city officials in Rome or the president of the country and so on — he invites homeless people to come and he has a meal with them.

That’s how he celebrated his birthday; again, trying to show us that the church has to be a church of the poor and with the poor — on the peripheries. Then he’s made friends (and he’s had friends) and we become used to the fact that one of his closest friends is a rabbi that he came to know in Buenos Aires, and he still corresponds with him and meets with him on occasion; they’re close friends. He has invited us to be open to people of every faith, to people of every race, people of every background. If you wonder, where does this come from? Why is Pope Francis, in a way, so different than what we’ve been used to?

Last week as I began to reflect on the Christmas mysteries that we’re celebrating and bringing to conclusion tomorrow, I began to realize it’s right out of the Gospel. Who were the first people who heard about the birth of Jesus where the angels sang to them and told them, “Go to Bethlehem and see the newborn King of the Jews”? The first people were the shepherds. These are people on the periphery. They were people who lived a very rough and difficult life, who were basically poor and weren’t welcomed in city society.

They were the first ones who heard the Good News when the angels proclaimed to them, “Go to Bethlehem and see the newborn King of the Jews.” They were the first ones to begin to go and tell people about Jesus, so Francis really was learning from that. But even more, and especially today as we celebrate this Feast of the Epiphany, the feast where we celebrate the fact, as St. Paul says, that the good news is being proclaimed not just to the chosen people, to the Jews, but to all the nations.

Paul makes it so very clear when he writes to the church in Ephesus and tells them, “This mystery was not made known to past generations but only now, through revelations given to holy apostles and prophets. Now the non-Jewish people share the inheritance; in Christ the non-Jews are incorporated and are to enjoy the promise.” Paul says that this is the Good News: that God has come to be part of our human family and everyone is part of that family. God has revealed to all, not just to a special few, and God is to be in Jesus brother and sister to every person.

That’s why one of the really extraordinary things Pope Francis said in one of his daily homilies was, “Even atheists are in heaven.” “What?” people said. He said, “Yes, even atheists are in heaven. God doesn’t push anybody away; everyone is welcome.” That’s extraordinary. It is something we need to really take to heart that God has come to us in Jesus to become part of our human family, to be one like us in every way. Every part of the human family is brother or sister to Jesus — everyone. That is, as Paul says, good news.

But we have to act on it; we have to welcome people, then. Pope Francis said that we really do have to be a church that reaches out to people who feel pushed away, and draw them back. We have to take every barrier that separates people and remove it, build bridges instead of walls, draw people in. That’s what the message of Jesus is. You know, we live in a time where there’s so much violence and killing, especially in the very place where Jesus was born. That’s where some of the worst killing and the worst suffering is going on. Tens of millions of people have been pushed out of their homes. They’re refugees like Jesus himself became a refugee. They’re looking for peace. How will it ever happen?

What Isaiah says in that first lesson today; it’s such a beautiful expression of what God intends to happen, “Arise, shine, for your light has come. The glory of God rises upon you. Night covers the earth, gloomy clouds veil the peoples, but God now rises and over you God’s glory appears. Nations (he’s talking about Jerusalem) will come to your light and rulers to the brightness of your dawn. Lift up your eyes, look around and see: they are all gathered and come to you, your sons from afar, your daughters tenderly carried. This sight will make your face radiant, your heart throbbing and full. The riches of the sea will be turned to you, the wealth of the nations will come to you and there will be peace.”

That’s what God promises. It seems to me that if we really listen to Pope Francis, who clearly has been listening to the Word of God, and we open our hearts to all people, break away from our fear, build bridges, connect with others, go to the peripheries, break down those barriers that separate us, then this marvelous vision that Isaiah proclaimed to those people returning to the rubble and destruction of Jerusalem will happen for us.

God really can bring peace into our world if we begin to listen to Jesus and follow his way, starting from the very moment he was born and welcoming the poorest of the poor to his side. If we can follow him as Pope Francis is giving us such a great example, we can come to experience peace in the Middle East once more, and peace in our own country, peace throughout the world. It’s a gift that God wants to give us, but to receive it we must listen carefully to this Word of God and follow the way of Jesus, the way of peace.

[Homily given at St. Anne, Frankfort, Mich. Jan. 8, 2017. The transcripts of Bishop Thomas Gumbleton's homilies are posted weekly to NCRonline.org. Sign up here to receive an email alert when the latest homily is posted.]

People | To draw people in, build bridges instead of walls

Francis encourages Colombians to move beyond 'corrupting darkness' of war

Pope’s quotes: ‘Unity happens when we walk together’