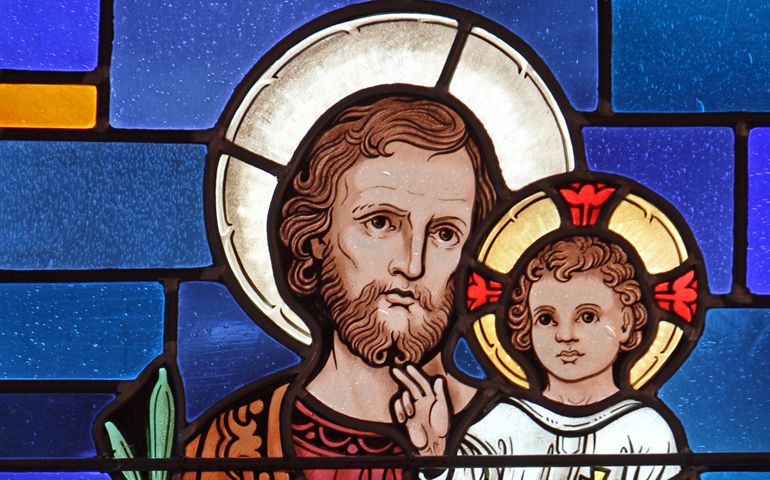 St. Joseph and the infant Jesus are depicted in a stained-glass window at the St. Joseph Home for the Aged in Huntington, N.Y. (CNS/Long Island Catholic/Gregory A. Shemitz)

As we begin this fourth and final week of Advent, the Scriptures direct us to ponder once more the reality of what is about to happen. Paul in his greetings to the church at Rome, speaking after the resurrection of Jesus, was able to declare so clearly, “Jesus is the Son of God,” but also the Son of Mary, one like us in every way except sin, our brother, a member of the human family entering into our history to show us the way to live according to God’s will and the way we transform our world into the reign of God.

To us, I guess, it can all seem so clear and so easy — Son of God and Son of Mary — yes, it’s a profound mystery, but we know who Jesus is, so we look forward to welcoming him and celebrating his birth. It wasn’t so easy, though, for the people at the time. In today’s Gospel we’re given the example of Joseph. It had to be extraordinarily confusing for him. He and Mary had been married; they were husband and wife, but they had not lived together. How did Mary become pregnant? What was this all about?

It’s hard, I think, for us to begin to grasp the confusion Joseph must have been experiencing. He knew Mary; he couldn’t imagine that Mary would have a child through adultery. He also had no way of understanding that this child was conceived through the power of God; so he did not know what to do. According to the law, Mary could have been stoned to death if Joseph had denounced her, but he spent time in quiet and prayer trying to discover what was going on.

Finally, he was given a message that helped him to understand that somehow this child to be born was not a child born through human conception, but through the power of God. Joseph didn’t know that at the time. He said he would not disgrace Mary, certainly not expose her to the full extent of the law so that she would be stoned to death, but rather he would find a way that she would just move aside quietly, move out of the public domain.

But then it was revealed to him through his prayer and through his reflection that Mary was indeed to be his wife and he was to be the guardian, the foster father of this child who would be Son of God and Son of Mary. So Joseph took her into his home and they began their married life, and within a short time, Jesus was born. I think Joseph is a very marvelous example to us. Don’t we often quickly come to judgment about other people?

We’re quick to condemn, to judge, to try to determine that we know the answers to some things that we see the appearances only. We judge people harshly, even those close to us, as Joseph was tempted to do regarding Mary. Instead, he waited, prayed, and came to understand and showed respect and love and care for Mary. He was rewarded then in a very extraordinary way because then he was able to be the husband of Mary and the one who would be the guardian, the caretaker, the one who would guide Jesus in his growing up. Joseph undertook a very important role in the life of Jesus.

I hope that as we spend this final week of preparation for celebrating the birth of Jesus, that we dwell for a while on Joseph, thinking about him, his example, his prayerfulness so that he could hear God speaking to him, his determination to follow what God suggested, and then his rejoicing in the birth of Jesus, God’s Son, but also part of our human family, one of us. If we try to follow this example of Joseph, I’m sure that our celebration of Christmas will have a deeper meaning and we will be able to live in a way that will be more like Joseph — respecting others, not making harsh judgments, always giving consideration that we don’t know all the facts in any situation, so we give the benefit of the doubt, we respect and refuse to judge. In that way, in imitating Joseph, we too will be carrying on the message of Jesus, which is a message of love for all of our brothers and sisters in the human family.

[Homily given at St. Philomena, Detroit, Mich., Dec. 18, 2016 The transcripts of Bishop Gumbleton's homilies are posted weekly to NCRonline.org. Sign up here to receive an email alert when the latest homily is posted.]

And then the angel left her