Reject violence, hatred, revenge, and only live the way of love 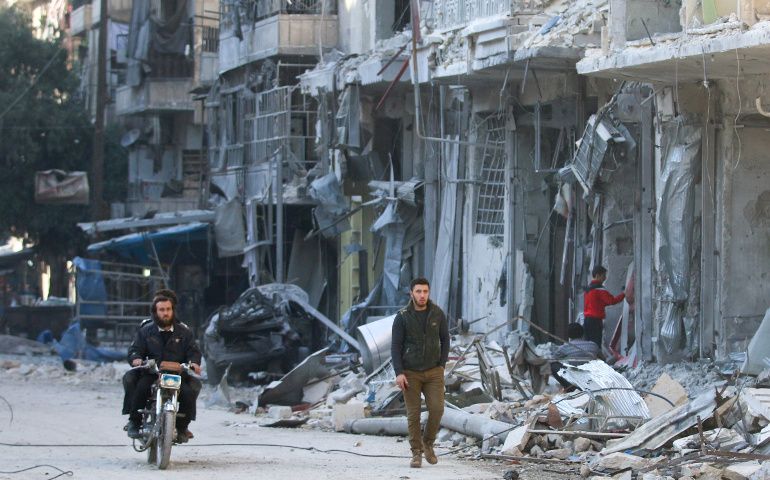 People are seen Nov. 17 in Aleppo, Syria, after an airstrike. Pope Francis has called events unfolding in the war-torn country a veritable "workshop of cruelty." (CNS / Abdalrhman Ismail, Reuters)

When we listen to the Scriptures each Sunday, there are certain Sundays, I think, that challenge us much more than others, that help us suddenly, maybe, to realize how radical is the teaching of Jesus. There’s that example in John’s Gospel where, after he has multiplied the loaves and filled the hundreds of people in the desert place, he talks about the bread becoming his body and people say, “That can’t be,” and some walk away and no longer believe in him.

Or the young man that comes up to Jesus and wants to know, “What do I have to do to be saved?” Jesus gives him the very stark answer, “Go, sell all you have and then give it away and come follow me.” The young man goes away very sad because in Luke’s Gospel where it’s recorded, it says that he was very rich. Today’s gospel (and the feast that we celebrate) is one of those times when the radical teaching of Jesus confronts us in a very sharp and clear way, even to the point where we could have great difficulty in accepting it and only, perhaps, over a period of time, being able truly to realize what Jesus is teaching and to accept it.

First of all, just the idea of Jesus being a king — do you remember in his public life there were times when the people wanted to make him a king and he absolutely refused? He actually went away to hide so that they could not come and take him and make him be a king; that was the last thing he wanted. Even though in our first lesson today, of course, the tradition of a strong warrior king begins in the Scriptures themselves. David becomes a model for the Messiah or the Anointed One.

People begin to think of Jesus as the new David who’s going to free them from their oppression under the Romans. So, there’s a basis for it, but Jesus shows them this is not the kind of king he is going to be. You may remember on Palm Sunday we dramatize it where Jesus comes into Jerusalem on that day when they are, in fact, in a sense, proclaiming him king. He lets the crowd shout out, “Praise to Jesus, Son of David, King of Israel!” But, he subverts the whole idea because he stage-manages his entrance into Jerusalem.

In Matthew’s Gospel, he describes how Jesus carefully arranges how he will come into Jerusalem and they will proclaim him as the king, but he will be riding on a donkey. Then Matthew says that’s to fulfill what was in the prophet Zachariah, “Rejoice greatly, daughter of Zion! Shout for joy, daughter of Jerusalem! For your king is coming, just and victorious, humble and riding on a donkey. No more chariots in Ephraim, no more horses in Jerusalem, for he will do away with them. The warrior’s bow shall be broken when God dictates peace to the nations. God will reign from sea to sea, and from the river to the ends of the earth.”

A warrior king comes in on a warhorse with troops following him, leading into battle, into war. But Jesus chooses the way that Zachariah describes and rejects the war chariots, rejects warhorses and armies. He will do away with them. No more warriors’ bows when God brings peace to the nations. Jesus fulfills that prophecy of Zachariah by coming into Jerusalem riding on a donkey in a very humble and subservient way.

It almost automatically brings us to want to reject it. How could a king be riding on a donkey and give up all his weapons? That’s not what we think of as a king. But Jesus had a whole different idea of how God’s supremacy as the creator and ruler of the entire universe is exercised. It’s not power, domination, violence, force; it’s through love.

When Jesus was on trial before Pilot, Pilot said, “Are you the king of the Jews?” Jesus said, “You say it, not I,” but then he goes on to say, “I am a king, but my kingdom is not of this world. If it were, certainly God would send powerful armies to free me, but my kingdom is not of this world.” It’s a kingdom that rejects violence and rejects war; it’s only the rule of love. One scripture scholar tells us, “If Jesus did not reject violence for any reason whatsoever, we know nothing about Jesus. Jesus taught us how to die, not how to kill.”

You die, as in today’s gospel, reaching out and praying for those putting you to death, “Father forgive them.” We find it difficult, I’m sure, to understand that somehow we must reject violence and war and not seek to be powerful individually and dominate others. But also in our common life as a people, somehow Jesus is calling us to really consider his radical rejection of violence and war and to try to act out of loving service for others, individually, but also as a community.

A couple of times now, Pope St. John Paul II and Pope Blessed Paul VI spoke at the United Nations rejecting war, “No more war, war never again!” John Paul goes on saying, “Because it destroys the lives of innocent people. … It throws into upheaval even the lives of those who do the killing and always leaves behind a trail of hatred and resentment that makes it all the more difficult to resolve the very problems that provoked the war.” War doesn’t bring peace.

We must learn that because as we wage war in the modern era, it does those things John Paul said so clearly, “Destroys the lives of innocent people and throws into upheaval the lives of those who do the killing.” We train people to be killers and that hurts them deep within themselves. Then as we can see, there’s always a trail of hatred and resentment that only leads to further war. No, we have to find a different way and we find it in the teachings of Jesus.

I understand how this is radical. Many of us maybe never have heard of this before or thought of it in these terms before. But it’s so clear that Jesus rejects violence. He has a different way of trying to transform the world; it’s through love. On the cross in today’s gospel, Jesus forgives those who are putting him to death; he loves them. Even in the midst of his own suffering, he reaches out to the criminal dying along side of him. He loves him saying, “This day you will be with me in paradise.”

We must try and perhaps the best thing is to begin with personal actions, think of the ways that, perhaps in our own lives, we need to become reconciled with another person or a group of persons. We must learn how to reach out in love and not reject people, push them away. We must try to live the way of love that Jesus demonstrates for us. We are empowered to do this if we listen deeply to what Paul writes to the church of Colossae today and pray that it will happen to us.

Paul speaks about Jesus, “He is the image of the unseen God. For all creation he is the firstborn, for in him all things were created in heaven and on earth, visible and invisible, thrones, rulers, authorities, powers — all was made through him and for him. He (Jesus, God) is before all. All things hold together in him and he is the head of the body, that is, the church, for he is the first-raised from the dead so that he may be first in everything for God was pleased to let fullness dwell in him. Through him, God willed to reconcile all things to God’s self. Through him, through his love poured forth on the cross, God establishes peace on earth as it is in heaven, through that love poured forth on the cross, reaching out with love, even to our enemies.”

That is how we imitate Jesus who is the king that does not dominate or hold power over others, but who loves and transforms through that love our world so that it can become a world of peace. We’re invited to enter into that work by trying to follow Jesus, rejecting violence, hatred, revenge, and only living the way of love, which will bring peace and establish God’s peace on earth as in heaven.

Justice | Reject violence, hatred, revenge, and only live the way of love

Bishops among first signatories to pledge to end death penalty