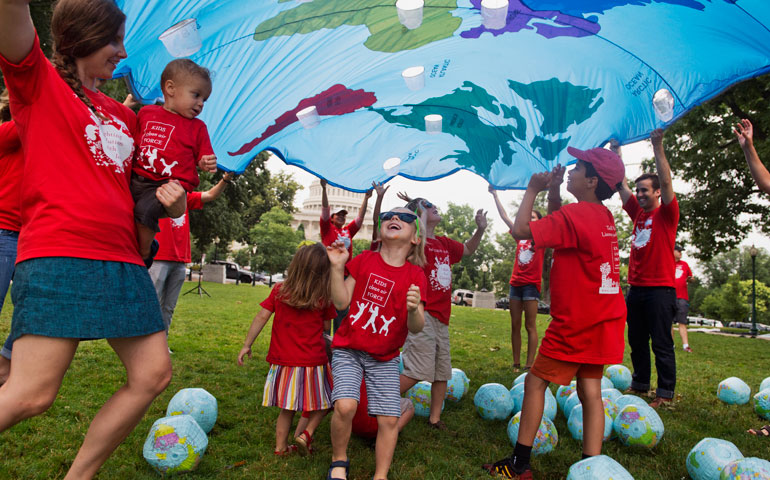 Pope Francis' increasingly powerful statements on global warming highlight that climate action is becoming a growing moral imperative for all people of faith. Why? Because climate action is about saving people.

The pope's highly anticipated encyclical will come after a long history of the Christian community pushing for climate action. And we do so to care for the most vulnerable people -- the people the Bible commands us to care about most.

Francis' many climate-concerned Christian predecessors include the Lausanne Movement (founded by Billy Graham and John Stott), Cape Town Commitment, and the Evangelical Climate Initiative (signed by more than 300 evangelical leaders, including Rick Warren, Bill Hybels and Joel Hunter). These are just a few of the Christians who recognize climate change as both the greatest moral challenge of our time and a great opportunity for hope.

The recent Vatican climate summit underscored a broad area of agreement between the Roman Catholic community and the evangelical community: Climate action is a pro-life issue.

NCR made that same point in an editorial last year after the release of the third National Climate Assessment, which, in exhaustive detail, made the case for the reality of human-caused climate change in the strongest terms to date.

Every child, born and yet-to-be born, deserves the promise and holy covenant of clean air and a healthy climate. What's more, every child deserves to reach the fullness of his or her God-given intellectual abilities. If we continue to rely on toxic mercury-emitting, coal-burning power plants, we risk harming our children's achievements.

Today, nearly one out of every six babies born in the U.S. has harmful mercury levels in his or her blood, which can easily affect developing children's brains, causing brain damage, developmental disabilities, neurological disorders, lower intelligence and learning difficulties.

Action to slow warming will protect future generations' mental development and potential, by assuring that human development is healthy and sustainable as we move from dangerous, polluting and highly subsidized fossil fuels to clean, affordable renewable energy. This transition will turn energy poverty into energy prosperity.

Carbon pollution threatens our children's health in many ways. For example, scientists have shown that air pollution from cars, factories and power plants is a major cause of asthma, which has dramatically increased in inner cities, and disproportionately strikes the poor, who are "at least 50 percent more likely to have the disease than those not living in poverty," according to the America Asthma Association.

We must ensure that our children grow up in healthy environments -- and clean, affordable renewable energy can replace polluting fossil fuels.

Business giants like JPMorgan Chase & Co. and Bloomberg Energy acknowledge that renewable energy is unstoppable. Sustainable clean energy makes economic sense, which is why it's helping to lift billions of people out of poverty. And along the way, it provides clean air, cleaner water and healthy children.

The developing world is deploying renewables over old-fashioned fossil-fuel power. Solar installations are doubling every two years, with developing countries installing renewable energy projects at nearly double the rate of developed nations. In fact, global emissions of carbon dioxide flatlined in 2014, while the global economy grew that same year. It was the first time in 40 years that we experienced a halt or reduction in carbon dioxide emissions without an economic downturn, according to the International Energy Agency.

The energy transition has begun, but we all have an obligation to ensure that it moves forward, with a commitment to the highest possible purpose. The costs of a changing climate are being felt now by all Americans and will be felt with a much more devastating force by future generations, unless we take responsible and moral action today.

In Brazil in July 2013, Francis reflected on the pastoral work of the church in the Amazon basin among the indigenous people and the "forceful appeal for respect and protection of the entire creation which God has entrusted to man." God's creation should not "be indiscriminately exploited, but rather made into a garden," he said.

It's time for Americans of every faith to demand the respect for creation that will foster smart, ethical and affordable policies for climate change adaptation. These policies and plans are needed to secure the safety and prosperity for every one of God's children.

It's time to stop exploiting God's gift of creation and to start tending the garden. Doing so is pro-life.

[The Rev. Mitchell C. Hescox is president and CEO of the Evangelical Environmental Network.]

A version of this story appeared in the June 5-18, 2015 print issue under the headline: All children deserve a healthy climate.