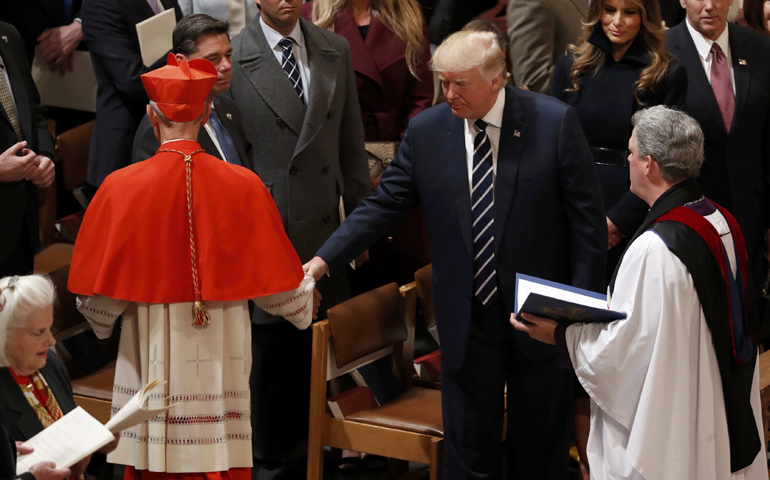 What are U.S. Catholics going to do with Donald Trump?

We have to deal with him because he is president of the United States. He occupies what Theodore Roosevelt referred to as the "bully pulpit," a position of legal and moral authority.

In calling it the "bully pulpit" Roosevelt did not mean the president could be a bully to others. In the speaking parlance of the early 20th century, "bully" simply meant "good" or "great." The presidency is a good pulpit from which to address the nation and world.

What does Donald Trump teach and preach by his words and actions? Trump's behavior is the antithesis of the Gospel. He teaches so many things contrary to the Christian way of life. He is a "scandal" in the literal sense of the word; that is, a stumbling block. He impedes our own proclamation of the good news of Jesus Christ.

We teach our children not to be bullies. He is a bully.

We teach our children to tell the truth. He openly lies and repeats those lies with greater and greater insistence, until they become truth in his own mind. For example, "Obama was born in Kenya."

We teach our children to be kind and respectful of others. He open mocks the disabled and belittles his opponents, e.g., "Little Marco" for Sen. Marco Rubio and "Lying Ted" for Sen. Ted Cruz.

We teach our children to be generous with the poor and the needy. He is selfish in the extreme and gives little or nothing to charity.

Jesus began his public ministry with a proclamation of the need for repentance, that is, "re-thinking" our lives. Trump has said he isn't sure that he has ever asked God for forgiveness.

In Matthew's Gospel, Jesus called on us to repent as he began his ministry. Immediately afterward, he gave us the Beatitudes. In those eight couplets, Jesus gave us the formula for Christian life.

"Blessed are the poor in spirit, theirs is the kingdom of heaven."

Generally we take this to mean we should be "detached" from worldly goods. We don't have to dwell in poverty, but we don't measure the value of life or people by their wealth. Trump brags about his wealth. He lives ostentatiously. He sees such enormous wealth as perfectly OK, even laudatory. He does not think he needs to contribute even the socially required minimum to the commonweal, the common good, by paying his taxes. He ignores the needs of the poor.

"Blessed are they who mourn for they shall be comforted."

Jesus meant for his followers to be empathetic, sharing in the joys and sufferings of others. If we want to be comforted by others we must mourn with them in their sorrow.

Empathy is a part of the Christian life. Donald Trump mocks people for their looks and handicaps. He mocks those who are empathetic. When Jeb Bush said immigrants come here out of love for their families whom they support, Trump mocked him.

Narcissism is the antithesis of one who mourns with others. Narcissism is a preoccupation with self. You cannot share in the sorrow of others because you are only focused on yourself. Only you count. Trump is a textbook narcissist. He is so busy bragging about himself and the size of his crowds, so busy obsessing over every slight, that he cannot mourn with others.

Jesus also said "Blessed are the meek, for they shall inherit the earth."

When we think of "meekness" Donald Trump does not spring to mind. Meekness is an aspect of the virtue of humility. It is the quality of deferring to others and being open to learning from others. Humility means not arrogant, but teachable. Meekness requires that we admit when we are wrong. Meek people are not puffed up with themselves.

"Blessed are they who hunger and thirst for justice or righteousness, for they will be satisfied."

Justice or righteousness in the Scriptures was a right relationship with God and others. It was being zadok, righteous like St. Joseph. It means we should humbly seek to conform our lives to God's commandments and not our own will.

At a minimum, it means that we should treat others fairly and keep our commitments. A man who cheated his contractors and repeatedly evades his creditors in bankruptcy is not righteous. A man who defrauds people enrolled in his so-called "university" by taking money and not delivering training is not zadok.

A righteous man is more than just doing the minimum. He goes beyond justice to mercy. He upholds the widow and the orphan and defends the alien and the stranger.

"Blessed are the merciful," says Jesus, "for they shall be shown mercy."

"Blessed are the pure of heart, or the clean of heart, for they shall see God."

Everyone struggles with this, to be clean of heart. Lust and greed cloud our judgment and become competing "deities."

But a man who admits to and brags about groping women cannot be called pure of heart. A man who objectifies women, by assigning "numbers," is not pure of heart.

What does he worship? Physical beauty and superficial attributes? He owned the Miss Universe pageant. Such a superficial and degrading view of women is not pure of heart.

Can we imagine Mother Teresa or Dorothy Day in a beauty contest? What number would Trump assign to Mother Teresa? What does he see when he looks at virtue and goodness?

Jesus says, "Blessed are the peacemakers, for they shall be called the children of God."

He never apologizes. He never backs down or lets up. He does not do what peacemakers must do: listen. He does not see the other side's point of view. He does not credit his opponent with good will.

He sees every opponent as someone to be shouted down or roughed up. He is not a peacemaker.

Finally, Jesus says, "Blessed are you when people insult you and persecute you and speak ill of you for my sake, for your reward will be great in heaven."

In other words, we don't have to win every argument and answer every insult. We don't live for the praise of others. We live for the approbation of God. Him alone do we seek to please. When we are insulted, we should offer it up and let it go. Jesus tells us to love our enemies and pray for our persecutors.

Repentance is not an option for a Christian. It is the essential beginning of our Christian life. Every follower of Jesus must at some point repent.

The gospel Trump is preaching absolutely contrary to the Gospel of Jesus Christ. We who stand in the real pulpit should be willing to say so.