Blog | On the Road to Peace

Honor Mandela by carrying on the struggle for justice and peace 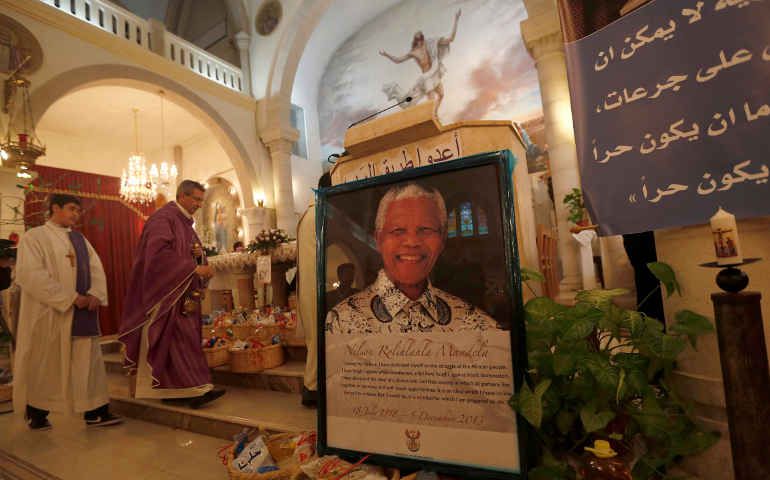 A poster with an image of former South African President Nelson Mandela is displayed during a special prayer service in his honor at the Holy Family Church in the West Bank city of Ramallah Dec. 9. (CNS/Reuters)

With everyone else, I've been mourning, celebrating and reflecting these past few days on the extraordinary life of Nelson Mandela, who died Dec 5. I'm amazed at his political vision; his daring revolutionary commitment; his patient endurance through 27 years in prison; his determination to avoid war and reconcile South Africa upon his release; his persistent forgiveness; his outspoken stance against war, poverty, AIDS and U.S. imperialism; his towering example; and, perhaps most of all, his personal dignity and humanity.

I saw him once, in 1990 in Oakland, Calif., at the end of his national U.S. tour just months after he was released from prison. The Oakland stadium was sold out. It was a beautiful sunny day and the crowd was filled with anticipation. When he walked on stage, the stadium exploded with applause. He gave a stirring speech that was interrupted every few sentences by more applause. His presence was electrifying. I left determined more than ever to do what I could for justice and peace.

In the mid-1980s, I tried to oppose apartheid and very much wanted to attend vigils against apartheid and get arrested with the thousands of others at the South African Embassy in Washington, D.C. But my Jesuit superiors refused to let me.

In 1987, while teaching world history to 150 high school students in Pennsylvania, I spent a week on South Africa and apartheid. I knew Mandela was not allowed to receive mail, so I proposed that we all write letters of support to Winnie Mandela. Through friends in the movement, we were able to get those 150 letters delivered to her. Everyone was excited to think of her reading our letters.

Months passed and I forgot about our project -- until one day, when I received an unmarked envelope in the mail, stamped from South Africa. Winnie wrote me a beautiful letter, thanking me for the encouragement and support. The letter was typed out on what must have been an old, barely functioning manual typewriter.

She signed herself "WM." Below was a P.S.: "Please thank each one of the following students for me." With that, she typed out the full names of every student, a list that went on for several pages. It must have taken her an hour to type out all the names. I gave a copy to every student.

In 1989, I was able to join a church protest, and 100 of us were arrested for blocking the entrance to the White House, calling for an end to U.S. support of apartheid. By then, I was helping out at a Jesuit church in D.C. We had declared ourselves a sister parish of Regina Mundi, the Catholic community in Soweto, a hub of anti-apartheid activity. In our church foyer, we posted pictures of our friends in Soweto.

For the past year, I've been planning finally to go to South Africa. I leave in early January with my friend Fr. Ray East and his sisters. Ray's grandparents helped found the University of Fort Hare, the first university for blacks in South Africa, where Mandela, Archbishop Desmond Tutu, Steve Biko and other leaders went. In the 1980s and 1990s, Ray's parish in D.C. also served as a sister parish to Regina Mundi. We're planning to visit the university and the parish and hope to meet with Archbishop Tutu in Cape Town.

So I've been studying South Africa for the last year and just finished reading Mandela: The Authorized Biography, which I recommend as the best of all the books on Mandela. I'm well aware of the terrible crises currently facing South Africa -- worsening poverty, widespread crime, government corruption. For us, the trip is a pilgrimage, a time to pray, listen and learn.

"It always seems impossible until it's done." That's what Nelson Mandela famously said as he reflected back on his years in the struggle to fight apartheid. For me, that is the key lesson from Mandela's life and the struggle to end apartheid. It was an impossible task, but it had to be done, even if it cost one's freedom or one's life. If everyone gives themselves to the struggle, then apartheid will surely fall.

With faith, hope, vision, trust in God, steadfast organizing, sacrificial love, perseverance and determination, we can fight the greatest injustices, Mandela insists. That's the legacy of those who fought for the abolition of slavery, women's suffrage and civil rights. Keep at it, even if the task seems impossible. Don't give in to fatalism or despair; otherwise, you'll do nothing, and there will be no chance of positive social change.

With even the smallest ounce of faith, Jesus teaches in Mark's Gospel, we can move mountains, even the mountains of apartheid, poverty and nuclear weapons.

I'll never forget watching Mandela's inauguration. I was in the Edenton, N.C., jail, facing years in prison for our Plowshares action. I was sitting right next to Philip Berrigan. The news anchor asked Mandela, "Did you ever think you would become president of South Africa?"

Mandela turned his head sideways and looked quizzical. "Of course I did," he answered firmly. "Every day in prison my comrades called me Mr. President. We spent every day for over 25 years preparing for this day, envisioning a new South Africa, studying other democracies, and planning out the details."

Phil and I turned and looked at each other. Mandela's visionary determination was shocking and amazing.

That's what we need today: ordinary, committed, determined people with a global vision of justice and peace doing what they can and having the perseverance to spend their lives making that vision come true.

I think the best way to honor Nelson Mandela is by carrying on the nonviolent struggle for justice and peace, continuing to do whatever we can, giving more and more of ourselves to that struggle. We need to pursue the impossible task of ending war, guns, drones, nuclear weapons, poverty, hunger, executions, environmental destruction, and all violence. This is what the spiritual life, the Gospel, demands of us: a full-time commitment to welcoming the reign of God in our midst. This is what makes life meaningful.

There are many struggles to join, including efforts to support human rights for Palestinians (www.fosna.org), solidarity with the Afghanis (www.vcnv.org), and projects to abolish the death penalty (www.ncadp.org) and nuclear weapons (see: www.icanw.org). One of the best environmental movements is www.350.org and its effort to stop the evil Keystone XL pipeline. All of them need our active support.

My friends and I are working hard to build Campaign Nonviolence, an effort to bring nonviolence to churches and schools, promote nonviolence trainings, and organize more than 300 local nonviolent demonstrations in congressional districts across the country next fall before the elections around opposition to drones, poverty and environmental destruction (www.paceebene.org). Like every struggle and grass-roots movement, we need all the help we can get. We need everyone to pitch in and do their part.

"We must use time wisely," Mandela said, "and forever realize that the time is always ripe to do right." That's a good Advent message. As we prepare again to welcome Jesus and his reign of nonviolence, I hope we can recommit ourselves to the grass-roots movements for disarmament and justice. That's the best way to honor Nelson Mandela.

[John Dear's new book, The Nonviolent Life, is available at paceebene.org and Amazon.com. To join his work with Campaign Nonviolence, contact the Franciscan-based peace group Pace e Bene. Next year, John will undertake a four-month-long national speaking tour about The Nonviolent Life and Campaign Nonviolence. Lazarus, Come Forth! and John's other recent books, including Daniel Berrigan: Essential Writings, Put Down Your Sword and A Persistent Peace, are available from Amazon.com. For more information, go to John's website.]

Honor Mandela by carrying on the struggle for justice and peace

A Christmas prayer for peace