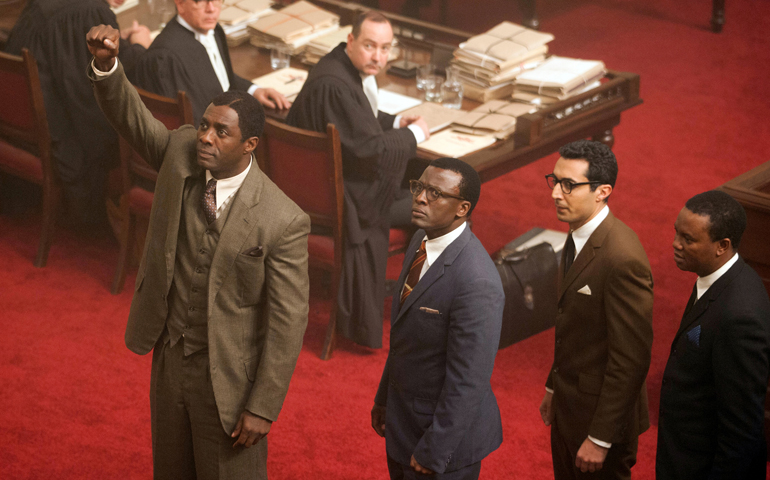 "No one is born hating another person because of the color of his skin or background or religion. People must learn to hate, and if they can learn to hate, they can be taught to love, for love comes more naturally to the human heart than its opposite."

That quote concludes the new movie "Mandela: Long Walk to Freedom." It's a fitting summation to a powerful film that I urge everyone to see.

Of course, it's an enormous undertaking to boil Nelson Mandela's epic life down to a two-hour film. That's why there's never been a movie about Martin Luther King Jr. Many have tried and failed. "Gandhi" succeeded because Richard Attenborough worked on the script for 20 years. Then he found the best actors and shot every scene with meticulous detail, even getting a million people to recreate Gandhi's funeral march. It's still the best movie ever made, in my opinion. Go and watch that, too.

I know some reviewers found the script for the Mandela film a bit plodding. Some dismissed it as a typical TV biopic. I think "Mandela: Long Walk to Freedom" is excellent and inspiring. Idris Elba as Mandela and Naomie Harris as Winnie Mandela are extraordinary. And in my book, time spent meditating on the lives of great peacemakers and justice-seekers is always time well spent.

"Mandela: Long Walk to Freedom" takes us through his long life -- the opening scenes of his tribal boyhood in Qunu, where he was buried last month; his first marriage, law practice and early home life in Soweto; his growing involvement with the African National Congress (ANC); his rejection of nonviolence; his leadership with the ANC military wing; his eventual arrest and trial, and the threat of the death penalty.

"During my lifetime, I have dedicated myself to this struggle of the African people," he tells the court. "I have fought against white domination, and I have fought against black domination. I have cherished the ideal of a democratic and free society in which all persons live together in harmony and with equal opportunities. It is an ideal which I hope to live for and to achieve. But if needs be, it is an ideal for which I am prepared to die."

What a moment! It reminded me of the calls by Gandhi and King to give our lives for the highest ideals -- for service to the poor, the struggle for justice and peace, the vision of nonviolence, and the reign of God. It reminded me, too, of Jesus' difficult call that we, his followers, need to take up the cross in service to God's reign for justice and peace. Mandela's daring speech asks: What are you living for? What are you hoping to achieve? Even: What are you prepared to die for?

Of course, the white judge decided not to execute the ANC revolutionaries, saying he did not want to make them martyrs. So he sentenced them instead to life in prison, and Mandela was famously shipped off to Robben Island.

The second half of the film moves fast through Mandela's imprisonment on Robben Island, Winnie Mandela's harassment and imprisonment, and the secret negotiations Mandela began with the white government about how to end apartheid. I found the scenes of Mandela on Robben Island shocking, moving and oddly hopeful.

With Mandela's release, we see a nation on the verge of total violence. In a powerful -- although, I think, fictional -- climactic scene, Mandela addresses the nation on TV, saying, "We cannot win a war, but we can win an election. Go home, be peaceful, and when election day comes, vote!" The film ends with his inauguration.

Mandela's long walk ended last month, but our journey to justice, peace and freedom continues. He gave his life for the people of South Africa at the cost of his freedom and his family, as the film makes clear. His life challenges us to make a greater commitment to confront the evils we face today: poverty, racism, war, nuclear weapons, environmental destruction -- all the systemic violence that oppresses humanity. I left "Mandela: Long Walk to Freedom" emboldened and motivated to do more for justice and peace.

In particular, the film raises the difficult question of sacrifice; that is, voluntarily accepting suffering in the struggle for justice and peace, and doing so, from the standpoint of nonviolence, without retaliation or revenge. Mandela's long suffering in prison symbolizes the horrific violence black South Africans suffered under apartheid. The contrast between the evil of practitioners of racism, injustice and apartheid and the extraordinary goodness and dedicated resistance of Mandela and his fellow resisters pushes us to reflect on our own lives, our own willingness to resist systemic evil, and how much we are willing to give of ourselves for the movement.

History demonstrates that nonviolent social change comes about through bottom-up, grassroots movements that resist systemic injustice and ultimately transform society. Such movements require committed people to be willing to make enormous sacrifices, including imprisonment and death, for the nonviolent struggle. I think that's precisely the call of the Gospel, that we willingly share the paschal mystery of Jesus in pursuit of God's reign and God's justice.

We sure need committed people today, people willing to sacrifice their time, energy and even their lives for justice and disarmament. We need more and more people to join the many grassroots movements of our time and to pitch in with the hard work of local organizing and movement building. For those looking to get involved, I invite you to join Campaign Nonviolence.

This week, I'm in South Africa visiting Johannesburg, Soweto, and Durban. Next week, I'll be in Port Elizabeth, Qunu, King William's Town, Cape Town, and even Robben Island. I hope to share stories of the journey over the next few weeks and come back re-energized to carry on the work for justice and peace, especially Campaign Nonviolence.

That's what I take from Nelson Mandela's heroic life and this ambitious film -- that the struggle requires all our energy, effort and attention, but not only is it worth it; it's the greatest gift we can offer with our lives.

[John Dear's new book, The Nonviolent Life, is available at paceebene.org and Amazon.com. John will be in South Africa for the rest of the month and will speak in California in February. He will lead a weekend retreat, "Lotus in a Sea of Fire," with Roshi Joan Halifax Feb. 28-March 2 at the Upaya Zen Center in Santa Fe, N.M., and will speak March 9 at Riverside Church in New York. He will give the keynote address with Rep. John Lewis (D-Ga.) at the Ecumenical Advocacy Days conference March 21 in Washington, D.C. For more information, go to John's website.]