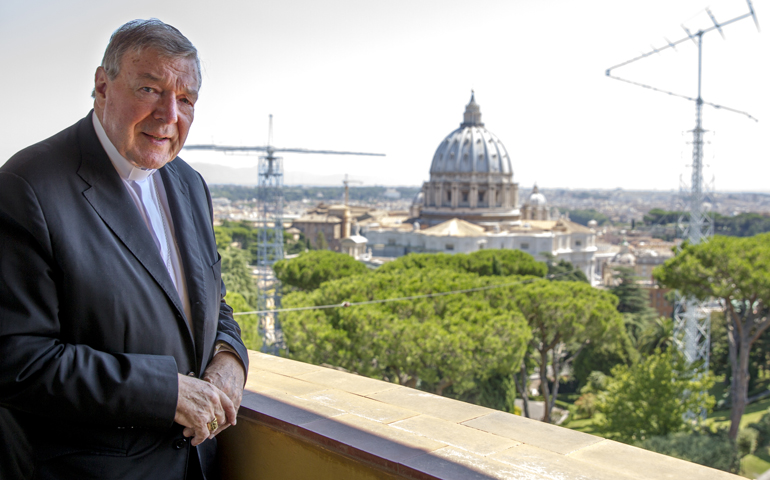 The Vatican published its annual financial statement last week and Cardinal George Pell, prefect of the Secretariat for the Economy, says it's the most accurate accounting of the money situation at Roman Catholic HQ ever.

Some of his admirers and scribes in the press called it the "most comprehensive and transparent balance sheet" the Vatican has ever published.

It is not at all clear where they got that notion, but Pell and his right-hand finance man, Danny Casey, are probably laughing. Yes, all the way to the bank.

The reality is that this newly published financial report is not at all transparent or detailed and probably not completely accurate -- at least not in the information that has been made public.

The document released July 16 is the briefest of summaries (a bit more than a page and a half in English and about the same length in Italian) of two different financial statements.

One is the balance sheet for Vatican City State, which includes the famous museums, fire department, post office, pharmacy, phone company and other municipal offices and services. It employs approximately 1,900 people.

The other report is for the Holy See, which has nearly 2,900 employees working in Roman Curia offices, the diplomatic service and other entities tied specifically to Apostolic See (i.e., the papacy) and its universal mission. Included here are the Vatican's radio, television and newspaper enterprises.

The summaries of the two consolidated financial statements that Pell's office put out on July 16 constituted nothing more than a press release. Obviously, he and his staff went into greater detail two days earlier, when they presented those same statements to the Council for the Economy, the 15-member board of cardinals and lay finance experts that German Cardinal Reinhard Marx heads.

Why were these fuller reports not made public?

In the past, the Prefecture of the Economic Affairs of the Holy See -- a sort of comptroller's office -- has sent the more detailed statement to all the world's bishops. But this information is never shared with the rest of the "shareholders" and benefactors of the church -- that is, the other 99.9 percent of its reportedly 1.2 billion members. And it was not shared this year, either.

In any case, even the bishops are never given much more than skeletal figures indicating only the bottom-line financial situation of a number of Vatican institutions and agencies. For example, not even they are told where the vast array of the Holy See's real estate and rental properties are located, in which institutions it deposits its cash, or in which companies it invests.

The recently released financial statements indicate that Vatican City State ended 2014 with a surplus of 63.5 million euro ($68.8 million), almost double that of the previous year. The press release says without even a hint of detail that this was mostly due to the "continued strong revenue from the cultural activities (especially the Museums) and favourable movements in investments." What other "cultural activities" besides the museums were so lucrative? And where is this theocracy, the smallest state in the world, investing its money? Not even the bishops know.

If Vatican City's finances once again towered in the black, the Holy See was once more awash in red. It showed -- to quote the press release -- "a deficit of 25.621 M Euro which is similar to the deficit of 24.471 M Euro reported in the 2013 Statements." That is exactly 1.15 million euro deeper in the hole. But since Pell and his apostles of good accounting have been on the job, Vatican "assets previously off the balance sheet" have been brought to light and included in the financial report.

The Australian cardinal has stressed that this is part of the transparency he wants to bring to the Vatican's world of finances. And all Catholics should encourage and applaud every step taken in the direction of transparency and full disclosure.

But Pell's record in this area is not encouraging. Yes, he has been able to balance the books and put money in the coffers of those places where he's been a bishop. Most recently, that was in Sydney. And Danny Casey, his personal assistant at his current Vatican job, was his chief financial officer in that big Australian archdiocese.

The cardinal's critics Down Under (and they are many) have voiced concerns about Pell's lack of transparency. One example they always point to is the visit of Pope Benedict XVI to Sydney in 2008 for World Youth Day. They say costs for the papal visit and the global youth gathering have never been made completely clear, especially how the expenditures were divided by the government and the Australian Catholic church.

The critics have also raised concern over the financing of Domus Australia, a former Marist Brothers convent in Rome that Pell convinced the Australian bishops to purchase and then refurbish for use as a 32-bed hotel for "pilgrims." The final price tag has never been revealed, but it is believed to have cost much more than the reported 30 million Australian dollars usually cited.

But that does not seem to worry Pope Francis. It is generally assumed that he brought the now-74-year-old cardinal to Rome on the Australian's tough-guy reputation to clean up what had become a murky financial situation at the Vatican. After a rough start, partly because of Pell's sometimes less-than-diplomatic demeanor, the pope put some necessary checks on the cardinal's wide-ranging powers over Vatican finances by giving special authority to two of his confreres. Pell now has to play nice with Cardinal Pietro Parolin, secretary of state, and Marx at the Council for the Economy.

Still, reforming the way the Vatican handles its money largely rests on the broad shoulders of the man once called Australia's most prominent Catholic. Pope Francis wants him to focus squarely on the new job he's been given in the twilight of his ecclesiastical career: reforming Vatican finances. Because, in case you have not noticed, Pell doesn't seem to be interested in many of the other reforms the pope is pushing.

In this, the cardinal has been more than transparent.

A version of this story appeared in the July 31-Aug 13, 2015 print issue under the headline: Vatican finances still lack transparency.