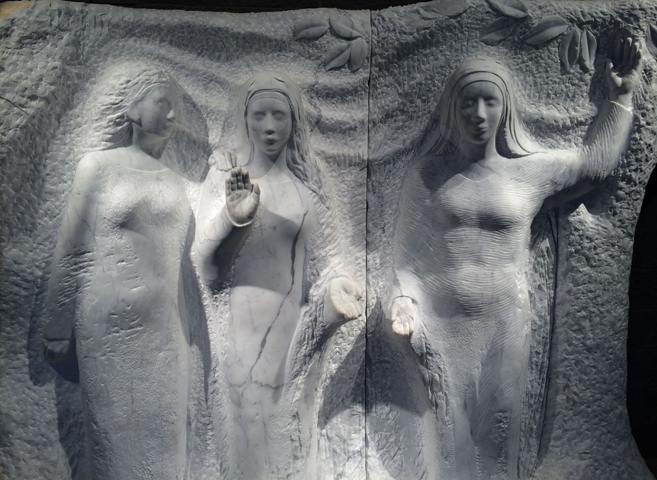 Awhile back I visited a relatively new church built by Church of the Resurrection in Solon, Ohio. I was moved by the striking original art that graces the church's sacred spaces. Fourteen mosaics depicting the "Stations of the Resurrection" are arrayed on walls encircling an assembly seated around a central altar.

Stations of the Resurrection? I had never heard of such a thing.

One nave features a life-size Carrara marble sculpture of Mary of Magdala as she proclaims the Resurrection. Mary, the wife of Clopas, and Mary of Nazareth accompany her. Facing them on the opposite side of the church is a dynamic bronze sculpture of Christ, whose broken body seems suspended in midair -- caught at the exact moment of Resurrection. Titled "Witness," the marble sculpture was created by Mary Jo Anderson of Portland, Ore. Frederick Hart of San Francisco created the bronze "Christ Rising."

I was so taken with the religious artistry displayed in this church that I wanted to learn more, so I met recently with pastoral team members Lisa Frey and Fr. Tom Dragga, and parishioners Mary Ann Theby and Rose Gaier. Gaier is a member of the arts and furnishings committee and Theby volunteered on the building committee.

Resurrection is a community filled with dynamic people, highly committed to the Eucharist and to social justice. For over 30 years the parish community had gathered in a plain and rather dark multipurpose room for Sunday worship. In the mid-1990s Resurrection parishioners realized they needed more space and thanks to the able leadership of Fr. Mark Hobson, along with Frey, Theby, Gaier and a host of others, the new church was dedicated in 2004.

When I asked where the idea for the Stations of the Resurrection had come from, Frey said simply, "We wanted everything in the church to speak to Resurrection."

"The stations idea emerged while considering the artistic ambience of the church," Gaier added. "We had a parish committee and one parishioner found a book by Andrew Walker, Journey into Joy: Stations of the Resurrection (Paulist Press, 2001). Our stations are inspired by his book. "

The mosaics range from the women's discovery of the empty tomb, through Jesus' many appearances (Mary of Magdala, the Emmaus disciples, the eleven, Thomas, Peter, Paul) and conclude with the Ascension and Pentecost. One station, "The Denial of the Resurrection" (Matthew: 28: 11-15) struck me as especially pertinent to the contemporary struggle to believe.

"But the stations are not literal depictions," Frey carefully pointed out. "There is no way to depict Resurrection so the rendering always has to be by way of metaphor."

Theby especially appreciates the episodic parish retreats that focus on the stations, often during Easter season:

[The art] gives you space to enter into it -- each time you come to one, you experience your story in relationship to the station's story. It 's all in dialogue. When we move together as a group each person speaks to what that Resurrection station means to them. It opens up doors [inside] that people didn't know were there.

The celebration of the Stations of the Resurrection (also known as the Via Lucis or Way of Light), originated in 1988 when Salesian Fr. Sabino Palumbieri proposed a new set of stations to accompany the traditional Via Crucis (Way of the Cross). In 2001, the Vatican's Directory on Popular Piety and the Liturgy, commended the new devotion calling it "an excellent pedagogy of the faith," since it "moves from the experience of suffering, which in God's plan is part of life, to the hope of arriving at man's true end: liberation, joy and peace which are essentially paschal values." (See bullet 153 in the hyperlink.)

At present there is no definitive list of "stations" though virtually all renditions include fourteen separate biblical scenes so as to correspond to the fourteen Stations of the Cross.

The message of the Resurrection stations clearly touches the hearts of people in the parish.

"You are with people as they walk by," said Frey, "You see their reactions."

"For as large an expanse as the church is, all of the art is approachable or at eye level -- it's all very touchable," said Dragga "I love seeing how women and children give a high five to Mary of Magdala's outstretched hand. People facing surgery especially often put their hand in hers."

Theby's favorite station is Christ appearing to Mary of Magdala: "I love the way she and Christ become one -- Love becomes love/beloved … For me, I think we spent so many years talking about being sinners and bad people -- a negative story. The Resurrection speaks to life, to joy, to energy."

"People don't deny they're sinners but they don't stay there -- the power of the Resurrection moves them on to joy," said Dragga who also finds meaning in the stations' placement between church windows. "We can also see beyond these walls to residential homes, to wilderness, to school buses on the road and these too become part of the journey."

Theby is clearly passionate about the beloved parish to which she has given much of her life:

"Joy, the spirit of joy is palpable here, you can feel it."

"Truth -- there's just an energy from belief in self as a wonderful creation of God," she continued. "So that even hard stuff is infused with belief that something good will come -- something that is the strength and power of Christ."

"We always speak to being Resurrection people and we become it for others."

Her faith-filled words are a powerful witness to this most blessed of truths:

*The second caption has been updated to include the title of the artwork pictured, and an earlier version of this story misspelled Clopas.