Delve into the Bible during Reformation anniversary 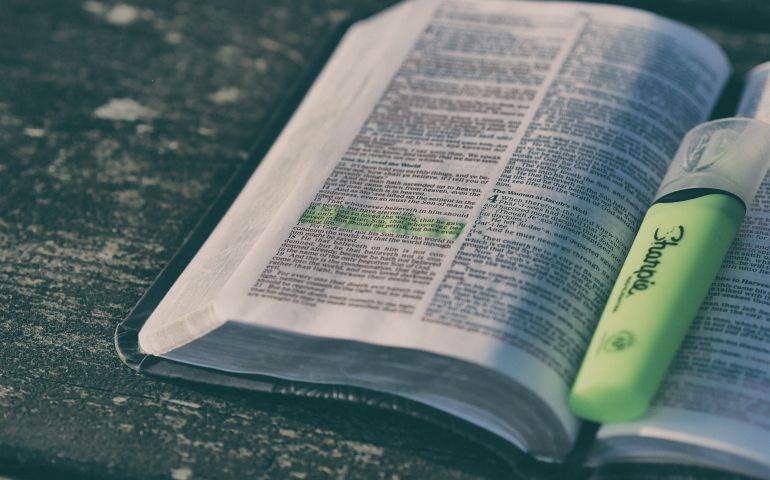 It's no secret that lots of American Catholics who grew up in the 20th century aren't very biblically literate. The only exposure to Scripture for some has been through lectionary readings at Mass. Some Catholics even tell me they were discouraged from reading the Bible on their own.

By contrast, Protestants have a reputation for being deeply and personally rooted in the Bible. That's an overstatement, though it's more true of conservative and evangelical branches than of members of mainline churches.

As my own pastor, Paul Rock, said in a recent sermon series about the Bible and its relevance in this, the year we're commemorating the 500th anniversary of the Protestant Reformation, "Most of us [Presbyterians] did not grow up walking around with a Bible and memorizing it and knowing it and being very confident in our understanding of it. Shame on us."

How to Create a Canon 2.5.17 - Rev. Paul Rock from Second Presbyterian Church on Vimeo.

(A small example from a man who has asserted that he's Presbyterian, Donald Trump: His nescient reference to "Two Corinthians" in a speech he gave at a religious school in the presidential campaign was an obvious sign that, to him, the Bible was unfamiliar territory in the same way that certain people attending a baseball game ask if it will go to overtime.)

One reason Paul used that "shame" line is that the Bible was at the center of the Reformation. Martin Luther made sure a German translation of it was available so people could read it for themselves. One of the cries of the Reformation (yes, a problematic cry, but a cry nonetheless) was "sola scriptura," which is to say, "Scripture alone" will be our guide.

In my experience, many Protestants who can quote the Bible quickly in almost any situation tend to read it much more literally than those who don't read it much. The latter group tends to see the Bible as authoritative but not, as the conservatives say, "inerrant" in all ways.

Certainly there are and have been excellent Catholic biblical scholars in our time, including the late Fr. Raymond E. Brown. But Catholic scholars did not get permission to do critical analysis of the Bible using modern exegetical methods until long after Protestants already were doing that, so it's taken them awhile to catch up.

These methods, such as form criticism, have opened up layers of meaning that previously were either hidden or impenetrable. In the process, Christians of all kinds have come to understand that when we read the Bible in English, as it has been translated from the Hebrew and Greek (and a little Aramaic), we're already reading an interpretation made by the translators.

In turn, we bring to what we read our own interpretations of words that are, after all, what all words are — metaphors. They are metaphors because they point beyond themselves to some other reality. Not only that, but as we read Scripture, it also reads us, and each time we approach the Bible we are different in some ways from the last time we read it.

I have at least three weekly study group opportunities to unpack parts of the Bible, not even counting our Sunday worship service. I'm perhaps a bit unusual among mainline Protestants in that regard because I write about religion. But I'm not a complete Protestant outlier in my regular contact with — and study of — Scripture.

So if I could wish for one thing to come out of this year of commemorating the start of the Protestant Reformation, it would be that Catholics would delve into the Bible in depth and with good guidance. In turn, I wish that Protestants would gain a deeper understanding of tradition, especially those aspects of the faith that were settled and secure before the Reformation and remain so (or nearly so) today.

As Jacob wrestled with God and became Israel (Genesis 32), so we can wrestle with God's word and become children of the light.

[Bill Tammeus, a Presbyterian elder and former award-winning Faith columnist for The Kansas City Star, writes the daily "Faith Matters" blog for The Star's website and a column for The Presbyterian Outlook. His latest book is The Value of Doubt: Why Unanswered Questions, Not Unquestioned Answers, Build Faith. E-mail him at wtammeus@gmail.com.]

Spirituality | Delve into the Bible during Reformation anniversary

St. Boniface Day: One man’s quest to make it a national holiday