In Alzheimer's, there is only the present 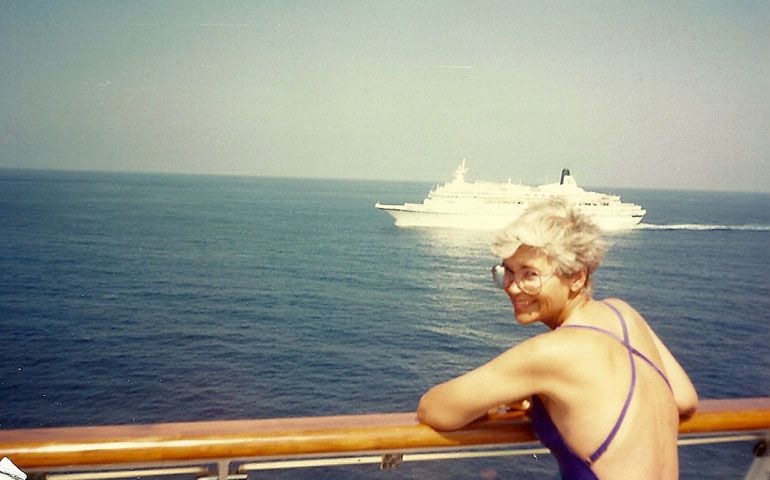 Sometimes she turns around and looks at me and I look back and see the same beautiful presence I photographed on a cruise 20 years ago. (Michael Leach)

A hundred million dollars. That's the cost for President Barack Obama's BRAIN (Brain Research through Advancing Innovative Neurotechnologies). This 10-year project will map the human brain like the Human Genome Project diagrammed the thousands of genes in our DNA. Its goal is to discover new ways to prevent and cure diseases like autism and Alzheimer's. It cost $100 million to wage war in Iraq for only three hours. Obama's BRAIN sounds like a darn good idea to me.

The brain is a terrible thing, you know. You don't have to read The New England Journal of Medicine to know what the initials ADHD or PTSD stand for. One in four Americans, from babies to retired football players, suffers from a brain disorder each year. And that's just now. The Alzheimer's Association estimates that unless scientists make new breakthroughs, in the year 2050 a new case will appear every 33 seconds.

My wife, Vickie, was diagnosed with Alzheimer's 10 years ago. She was in her late 50s. We entered a trial drug program at New York Presbyterian Hospital, and every three months Vickie lay all day in a hospital bed for an infusion of a new medicine that worked on her brain's plaque like laser therapy scales tartar off gums. I loved it when the intern, a graduate student named Sarah, came into the room carrying the medicine in a brown paper bag like a teenager guarding a bottle of bourbon. Then nurse Rachelle, with fingers as sure as a violinist's, inserted a tube into Vickie's vein and hooked her up to the hanging plastic bag of a potion that would drip, drip into her wrist and swim up to her brain like a salmon. I sat next to Vickie, as did our neurologist, Dr. Karen Bell with her Whoopi Goldberg hair, and Dr. Evelyn Dominguez with her Dominican smile, and I'd always say: "This is a like a sacrament."

A few months ago the results of the study made worldwide news: The drug had little more effect than a placebo. It was canceled.

We're not sad. We celebrated a eucharist four times a year with caring friends. We shared moments that were optimistic, grateful, sweet, kind, and helpful to others not born. Some days got boring, like many do, but our conversations, like most conversations, were fun.

Obama's BRAIN may bring miracles of medicine, but they'll come too late for millions like Vickie and me. That won't stop us from being more interested in being positive than in dwelling on what might or might not be. Alzheimer's sucks, but we don't have to suck on its teats.

Vickie is the most grateful person I've ever known. A few years ago when we'd take a walk, she'd exclaim, "This is the day the Lord has made! Let us rejoice and be glad! Thank you, God!" Those words are gone now. But she'll still point to the sky and exclaim, "Look at that! It's beautiful!"

She got a birthday card from her sister Delta this morning with a cover photo of two little girls in pink dresses chasing butterflies in a field. The script says, "Do you remember when we were young, Sis?" Vickie couldn't read the handwritten message inside but knew who wrote it, and has looked at the card half a dozen times now. Each time is a brand new experience for her because she can't remember the last time. Each time she expresses joy.

Sure, it gets tedious sometimes, even hard, and when she doesn't remember who I am it hurts. The only cure for that, I keep learning, is to eschew daydreams, and change the way I see. In reality, I have nothing better to do with my time.

Our friend Ruth Robins, a counselor, told me that despite appearances people with Alzheimer's know deep down that they are whole. The poet Gerard Manley Hopkins wrote about beholding "the dearest freshness deep down things." My main role as a caregiver is to know that she is one, that she is healthy, that she is whole. That changes the way I communicate, the tone of my voice, the look on my face.

I help Vickie dress and bathe, and I prepare the meals (takeout is wonderful) and it's no big deal. Mothers do that for years and never complain. They don't get joy out of it, they bring joy to it.

Sometimes Vickie gets confused or frustrated, and when that happens, she may get uncharacteristically mean. Alzheimer's is an opportunity for the caregiver to practice the power of speaking softly and learn that "the love of being loving," rather than "persons," as they say in metapsychiatry, is what changes everything.

Vickie and I spend most of our days in our family room where I sit at my desk and edit books or this column. She sits on our recliner a few feet behind me and watches "The View." Sometimes I come over and sit on the couch, and the computer goes into screensaver mode. Justin, the teenager next door, helped me set it up so that photos of Vickie's life blend one into another. When she gets up, the images invite her to the computer like the fountain of youth enticed Ponce de León. She sits and watches scenes from her life pass by like a newsreel in reverse. Sometimes she turns around and looks at me and I look back and see the same beautiful presence I photographed on a cruise 20 years ago when she was also turning around. Everything is different now. But nothing real has changed.

Spirituality | In Alzheimer's, there is only the present

Be voice of God to all, pope tells missionaries of mercy

From Apocalypse to Advent

What makes a family?