Being American is a spiritual state of mind 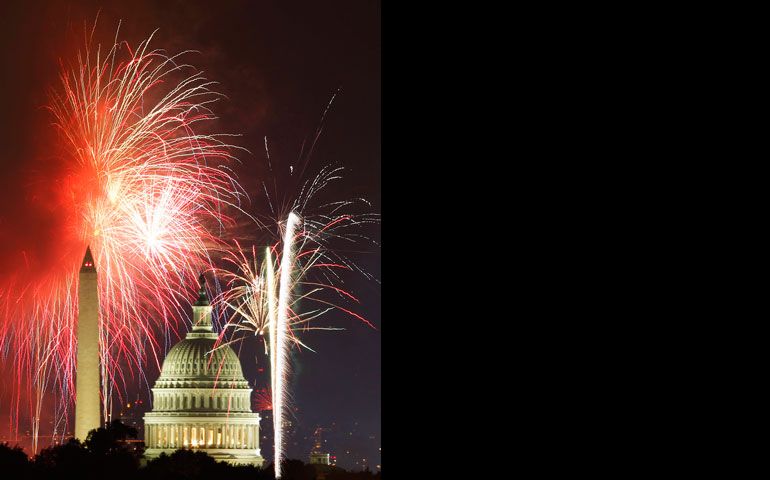 Fireworks light up the sky around the U.S. Capitol and Washington Monument on Independence Day in 2012. (CNS/Reuters)

I said something smart to my sons once. The Berlin Wall had just fallen, in the twinkling of an eye, and we were watching it on TV. I said, "A good idea will always outlive a bad one."

America is a good idea.

"Ours is the only country," wrote journalist John Gunther, "deliberately founded on a good idea."

That good idea is neither political nor partisan but spiritual and universal. It reflects the reality that each of us is made in the image and likeness of God:

All of us are created equal, endowed by our Creator with certain unalienable rights, among them life, liberty, and the pursuit of happiness.

I learned in religion class that God created us to know, love and serve him in this world and to love our neighbors as ourselves. I learned in civics class that each of us depends on all of us, and that all of us need each of us. The pursuit of happiness is a team sport.

Most Americans know that. That's why we don't mind paying taxes for the good of the whole, and want to help those whose needs are greater than our own. We don't need to be religious to understand: "If one part of the body suffers, all of the other parts suffer with it; if one part benefits, all the other parts share in its joy" (1 Corinthians 12:26).

The Christian idea and the American idea are not the same, but the same spirit runs through them like blood through a body. Supreme Court Judge Learned Hand in a speech on I Am an American Day, 1944, taught us all:

Being American is a spiritual state of mind. The farmer in Cheyenne knows that the welfare mother in Chicago is his neighbor. That's why the firefighter in New Mexico feels diminished when one of his brethren perishes in New York. And all of us are replenished when volunteers from everywhere flock to Oklahoma or New Orleans or Newtown to lift debris or share a blanket or hold a hand. That's why we are the "united states."

Sure, we also have sins as great as our virtues. The American dream sometimes slips into nightmare. "American history is longer, larger, more various, more beautiful, and more terrible than anything anyone has ever said about it," novelist James Baldwin observed. Our ancestors ravaged an Indian nation, chained a civilization of Africans, and killed each other in a civil war. Even today we make abysmal mistakes, invading a country without cause, turning cable news into cage fights of fear and rage. Too many of our rich and those who would be rich worship at the altar of Ayn Rand rather than appreciate the example of Bill Gates, who made a fortune through ingenuity and is giving it away. "Have you not learned," wrote Benjamin Harrison, 23rd president, "that not stocks or bonds or stately homes, or products of mill or field are our country? It is the splendid thought that is in our minds."

America, at heart, is a spiritual state of mind. That's why I have hope for this blessed but troubled country. It is founded on a good idea. And good ideas always outlive bad ones.

Spirituality | Being American is a spiritual state of mind

Over the bent world

'Great misunderstanding' seen on church's teachings on end of life