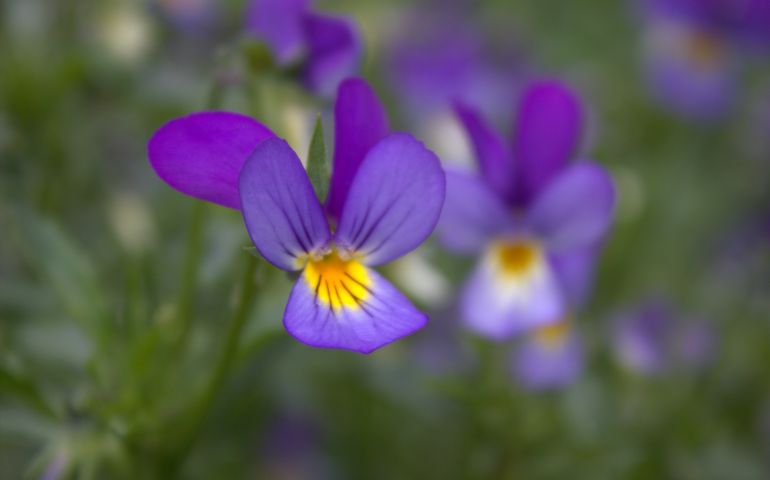 I was typing a sentence condemning the brutal bombing of Iraqi children when she came into my study, pulled my chair from the desk, took my hand, and cried, "Hurry." We raced two blocks to an abandoned house where a front yard had just been attacked and overtaken by wild violets, by Johnny-jump-ups. We stood in silence for three long minutes and cheered the victory of beauty.

It is because I believe in the victory of beauty that I have walked in the annual Good Friday Pilgrimage for Peace sponsored by the Benedictine Sisters of Erie, Pennsylvania, since 1980. By putting one foot in front of the other for 7 miles, one can learn a lot about the journey from evil to beauty, from despair to hope.

The pilgrimage begins in the inner city and winds its way to the monastery outside the city, stopping periodically to pray at stations where the body of Christ suffers today. We stop at the soup kitchen, where we are reminded that in the United States our city holds the dubious distinction of having the highest percentage of minority children living in poverty. There is a tavern that markets nude dancing, a symbol of how society encourages the exploitation and degradation of women.

Except for the prayers at the seven stations, the entire walk is done in silence. Parents with children, people using wheelchairs, the elderly, college students, and sisters — about 150 ordinary people — follow a simple wooden cross for the three-hour observance.

Once at the monastery, the pilgrims process into the chapel for the traditional Good Friday service with its readings, prayers and adoration of the cross. After each pilgrim kisses the huge wooden cross and receives the broken body of Christ, the tabernacle door is closed, the altar is stripped, and silence returns. One could be left in despair, except that from the balcony comes the sound of a bell and two cantors sing over and over: "It is finished in beauty. It is finished in beauty." Then the final bell and the final silence.

Ah, yes, it is finished in beauty.

Tenacious wild violets, erupting year after year no matter how many children are tortured worldwide, is a glimmer of hope that God's plan for creation will triumph. Ordinary people participating in a 7-mile peace pilgrimage year after year, despite growing lines at soup kitchens and escalating violence in our cities, is a hope that death will not have the final word.

It is no mistake either, I believe, that Mary Magdalene first looked on the risen Jesus that early morning on the first day of the week, just after sunrise, and saw, of all things, a gardener. Our task is not about death, the empty tomb and the empty shroud. It is about planting and sowing and caring for hope in whatever garden we find ourselves.

At the Easter Vigil in our monastery chapel, a sister dances the Alleluia banner down the center aisle, accompanied by hand bells and a congregation of hundreds singing "Alleluia."

Two dozen people process down the side aisles carrying flowers of every color and fragrance. In less than a minute, an empty sanctuary is transformed into an overpowering garden of lilacs and tulips and hyacinths and daffodils. Hold fast to hope, the fragile flowers shout.

Ah, yes, it is finished in beauty.

[Benedictine Sr. Mary Lou Kownacki is director of Benetvision and of Monasteries of the Heart, an online monastic community, and author of A Monk in the Inner City.]

This Lent, we are to decide how we will live

When I fall, the Stations of the Cross help me to get back up, walk on