It was barely midday, and I was already exhausted. We had set up this makeshift feeding center in Ethiopia for victims of a devastating famine, and they now blanketed the room. Women cradling emaciated children pressed against one another, as each claimed a coveted piece of that hard mud floor.

I was about to assist the nurses attending a dying baby, when one of our Ethiopian aides burst into the room. “Come!” she shouted. “Hurry! They are calling for a doctor. They say there is a dead body beyond the outer wall.”

We had no doctors.

Preoccupied with the emergencies at hand, one nurse said to her, “If he’s dead, he doesn’t need a doctor. Can’t you see? We are busy here.”

The aide persisted. “Someone must certify that the person is dead before they can proceed with a burial. It is our tradition. It must be done before the sun goes down.”

“Dead is dead,” she said. “Surely you can handle that. Go make the official pronouncement.” 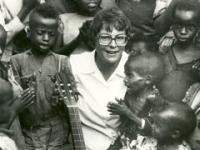 So Dr. Winter, with a doctorate in liturgical studies, followed the Ethiopian aide, feeling as ill at ease as a freshman en route to a qualifying exam.

The body was a long way off, on a sandy beach by a river’s edge, where a very large crowd was waiting. All of them were male. When they saw me, they began to shout in a language I did not understand. Warning signals went off within me. I’m in the middle of nowhere. Nobody knows I am here. We two are the only women in the midst of a hostile mob.

One of the men responded, “We are angry because you up there in that camp are the ones who killed this man. Yesterday, he came to beg for food, and you turned him away. Now he has died of hunger, and he died because of you.”

I had to calm this volatile situation. I said, “Let us first be certain he is dead. Then we can investigate why.” They agreed. I approached the body baking in the sun.

As I stood there, staring death in the face, I recognized who the one looking up at me through his unseeing eyes was, and I was horrified. A young adult male, stick-thin, in rags, had indeed come into the compound yesterday, saying he was hungry. He pleaded for a box of biscuits, that staple of intensive feeding centers everywhere. I was about to give it to him when a staff member berated me: “Those biscuits are for the children. There won’t be enough if you start giving them to whoever comes along.” Then she said sharply to the starving man, “Why did you come here? You know you are not allowed. This camp is only for children and those biscuits are for them.”

After she left, I took a biscuit and placed it in the man’s hand.

I barely slept at all that night, for my heart had been filled with remorse. Now the source of my guilt and regret had returned in death, but our status was reversed. He was secure in the embrace of Allah, and I was in need of deliverance.

I prayed for divine guidance, and said to the mob, “This man is indeed dead, but he did not die of hunger. Look, a piece of uneaten biscuit, which I had given to him yesterday, is still there in his hand.” He was indeed clutching that life-giving bread in his lifeless hand. A murmur of appreciation arose and spilled over into prayer. After the young man’s body had been wrapped in a clean new cloth, something amazing happened: A beautiful butterfly -- the first I had seen in Ethiopia in all the times I had been there -- circled the dead man’s body, settled briefly on the cloth that covered his forehead, and then flew away, circling, spiraling upward, until it disappeared.

I saw something invisible but real through the eye of my soul.

Living among the disenfranchised had transformed my perspective. I would never look at religion and society or my own faith traditions in the same way again. I saw more than ever that the spirit of the living God inhabits all creation, even biscuits and butterflies, the living and the dead. When we see life in this way, we behold the secular as sacred, the “other” as part of our self and of one another, and we welcome the outsider in. Any meal that nourishes both body and spirit is a eucharist with a small “e” and potentially transformative to one with eyes to see.

This is what I was graced to see in Ethiopia.

[Miriam Therese Winter, a Medical Mission Sister, served in Ethiopia during the famine in 1985. She is the composer of songs such as the gold record “Joy Is Like the Rain” and books like eucharist with a small “e”.]

I could use a transfiguration

Whatever happened to Lil' Miss Hagel?

How to overcome the Good Samaritan Syndrome

Maka Anguladze: ‘I think I was born here’