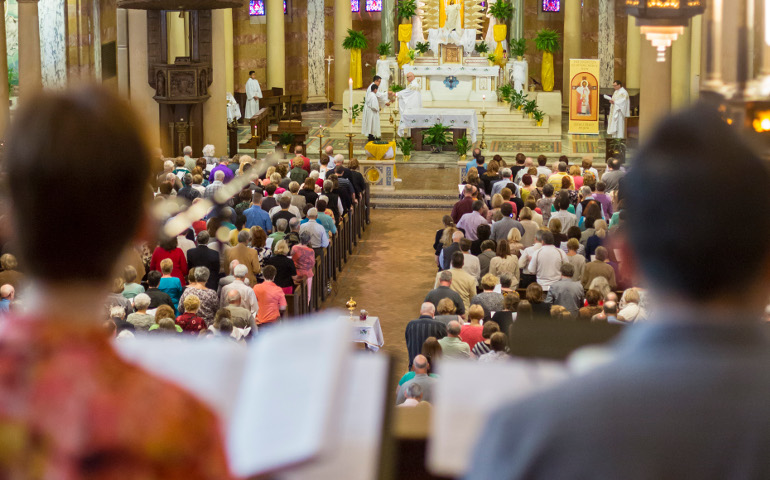 People pray during Mass April 17, 2016, at Holy Redeemer Church in Detroit. The Mass was the site of a “Mass Mob” event, an evangelization effort aimed at boosting regular Mass attendance. (CNS/Jim West)

Call me old-fashioned. I need to be down with the flu or snowed in before I’ll skip going to Mass. I love being there. Our parish church borders a Jesuit university, and during the school year a sizable percentage of those attending are students, so it’s a good mix of older and younger folks. Still, I admit feeling sad about some relevant statistics. According to the Center for Applied Research in the Apostolate, among U.S. Catholics weekly Mass attendance isn’t looking good. From 1965 to 2016, it dropped from 55 to 22 percent.

The grapevine has it that many Catholics skip Mass frequently because they “don’t get anything out of it.” Others appeal to the clergy sex abuse scandals of recent decades, saying they don’t want to associate with a church that harbored abusers for so many years. Some have even chosen to transfer to Protestant churches or recently established alternative forms of “Catholicism,” complaining that they can no longer tolerate a church that relegates women to a second-class status.

I understand, and I sympathize. Yet I hardly ever miss Mass, even when Kathy and I are on the road. I can’t see my way clear to skipping Mass because the liturgy tends to be unexciting. Yes, during the homily my mind frequently wanders. But the bottom line for me, my soul-seeing perspective, is that the Mass is the Mass. It’s often liturgically humdrum, some prayers were clumsily retranslated in recent years, and the music is merely okay. I find it impossible to give up on the Mass, however, because I myself am seriously flawed; I’m a person with a humdrum faith.

Cobbled together as the Mass is, in my heart I know that the risen Christ is there among all of us imperfect Catholics and random sinners. I just can’t get over that the God Jesus called Abba, Father, freely and gladly gives himself in his holy word proclaimed. It blows my mind that the Lord Jesus gives his whole risen person — and whatever that means it’s a cosmic concept — to us in a little bread and a sip of wine.

Too many saints and other holy ones loved the Mass for me to leave their company. When someone whines that they “don’t get anything out of it,” that strikes me as childish. If you don’t get anything out of it, that’s your responsibility. There is plenty to “get out of” the Mass if you don’t assume that liturgy is supposed to be entertaining. It you focus on what the Mass says, and does, and gives, it may turn your life around.

A few summers ago, Kathy and I spent five weeks in the U.K. The first Sunday we were in London, the nearest Catholic church was a very old one that, we discovered, offers the “old” Mass regularly. So for the first time since about 1965, I attended an old-style Latin Mass. We wandered in, located a side altar where Mass was about to happen, found seats and waited. Soon, from off in the distance, came the click, click, click of an approaching priest’s shoes on the tile floor. Carrying the covered chalice and paten, he placed them on the altar, and then began the prayers at the foot of the altar: “Introibo ad altáre Dei.”

I was intrigued. But not for long. This Mass was a two-man show, the priest doing everything, with a kneeling middle-aged layman reciting the responsory prayers on behalf of us silent lay folk. The priest even functioned as lector, droning the lectionary readings before he read the Gospel. I didn’t like being a spectator. Still, kneeling at the altar rail, I was surprised the priest gave Kathy — not one to go along to get along — Communion in the hand. Also, the main reason I knew what was going on was because I could see shadows of the “ordinary form” Mass I’m used to. Plus, I’m one of the diminishing number of Catholics who grew up with the “old” Mass, so I do have my memories.

Here’s the thing, however. Midway through that “extraordinary form” Mass, I realized that even if, by some astonishing historical hiccup, the entire church returned to the old Latin Mass, I would still go to Mass each Sunday. This is so because no matter what the liturgy looks and sounds like, the Mass is still the Mass, and the church is still the church I love. I will never give up on the Mass, and I will never give up on the church, imperfect and frequently unsatisfactory as they both are, and like I am.

[Mitch Finley is the author of more than 30 books on Catholic themes, including The Seeker’s Guide to Being Catholic and What Faith Is Not. All Soul Seeing columns can be found at NCRonline.org/blogs/soul-seeing.]