The kingdom of heaven is like a big car wash 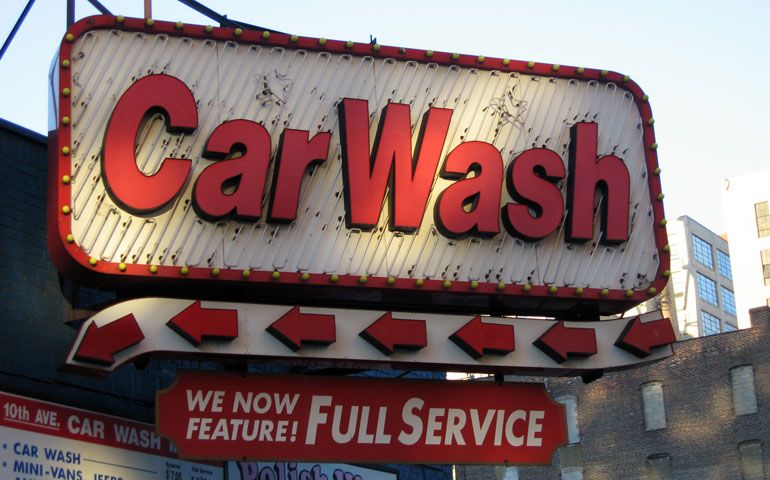 It was a wonderful car wash. It was not far from where I lived as a kid. It was on Grove Street. The Erie-Lackawanna train tracks stretched a block or so to the south and Fuzzy's Gulf gasoline station was just north of the car wash.

There were lots of bells and dings and whistles. As cars entered the gas station and passed over tubes that lay across the pavement, a bell would ring in the gas station office and Fuzzy or one of his attendants would come out to pump the gas, check the oil, and wipe the windshield.

When a train approached, its whistle would blow and the gates of the railroad crossing would waver a bit, and then its bells would ring and the gates would come down as the train cars passed.

The car wash had a dinging sound of its own. The only bell was the little one in the cash register that rang a few times when the drawer popped open.

Of course, there were the sounds of the water being forced through tubes, the swishing of the big brushes, the low rumble of the gears and chains as it slowly pulled the cars through the washing tunnel.

The car wash had almost everything for cleansing, waxing, polishing, drying and, I might add, even survival.

I would pull into the entrance and a man guided me so that my front tires rested on the metal track. I missed more than a few times but the man was always patient. He would wave me back a bit and then beckon me forward.

Once I got the alignment right, he came and opened the door and I would get out and head into the area that stretched along the side of the car wash. I would watch from there. There was a glass wall that kept me dry.

The guy who guided me sat in the car, wiping the dashboard with a flourish and then he hopped out, taking the floor mats with him. Separate cleaning, the floor mats.

The car moved forward. Huge rollers with enormous brushes emerged from all directions. The brushes turned as they moved over the car, in front of the car, on the side of the car, and over again. All the while, the car inched forward.

The brushes moved with it. There were all kinds of conveyer belts that moved in a fascinating symmetry. The brushes were attached to these and they would spin, recede, rise high and then low, guaranteeing that every bit of the car surface would be washed, buffed and even waxed.

For an extra few bucks, you could get real special gonzo wax. I guess it had a better gloss or sealant or whatever. I always got it.

Along the walls in the waiting or walking area there were all kinds of things for sale. Most were wrapped in plastic and attached to large, colored pieces of cardboard.

As my car emerged from the far end of the wash, a small army of men and women surrounded it and, with military efficiency and the finesse of artistes, proceeded to dry, buff, wipe and shine my car. It was amazing. Each of those folks had a predefined place to take care of. Finally, my mats appeared as if by magic, clean as a whistle.

My car glistened in the sun. I was happy. I was always generous with the tip. I had a feeling that the tip would be remembered.

It seems to me now that life is like a big car wash. God gives us everything we need to get through it and come out shining, surrounded by bells and whistles, high and low buffing and buffeting, delights galore along the walls of life.

Extras? We may have to pay a bit more for them. But that is OK. It is all a gift. Worth the ride. Worth the tip. Worth keeping clean while listening to the bells and whistles and the gushing waters of life.

[Fr. James Stephen (Jeff) Behrens is a Trappist monk at the Monastery of the Holy Spirit in Conyers, Ga.]

Spirituality | The kingdom of heaven is like a big car wash

Your thoughts on being spiritual but not religious