Knowing grace only when we see it 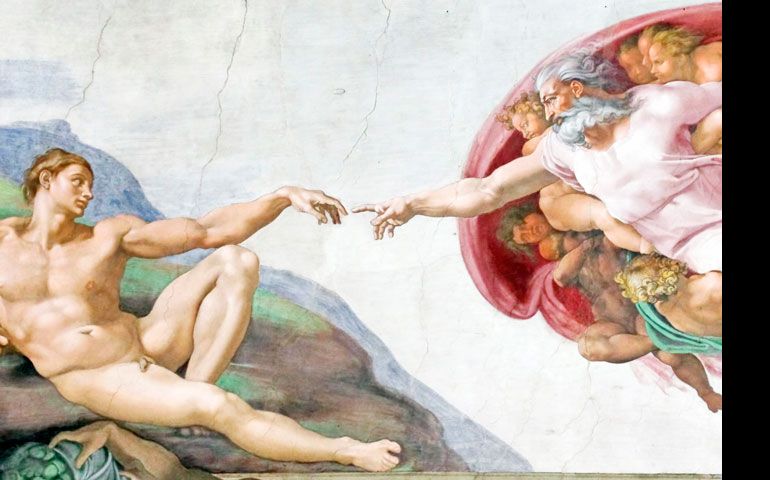 In Michelangelo's "Creation of Adam" fresco in the Sistine Chapel, we see God and Adam reaching out for each other, but although their fingers come close, they never quite touch. (Dreamstime)

It was a question we've all heard a thousand times, but the conversation that followed struck me as revelatory, even prophetic. Asked by a Macy's salesperson if he needed help, the shopper said, "Thanks, but not yet. I'm looking for something I just can't live without."

"In that case," the salesperson said, "you'll only know it when you see it. But let me show you some things to get you started."

The customer looked stuck in between blind desire and the relief that comes with clarity.

Herminia Ibarra says practically the same thing in her Harvard Business Review article, "How to Stay Stuck in the Wrong Career." It was a wake-up call for professionals in the "in-between" places in their careers: dissatisfied with the way things are -- perhaps feeling stuck -- yet uncertain, fearful even, of what to do next.

The article drives a stake into the advice headhunters cavalierly give career changers: "Calculate your strengths and weaknesses, identify a career goal and then work a plan to get what you want." But if your goal isn't clear and you don't have an image of who you want to be or what you want to do, that kind of advice gets you nowhere. We only know what we can't live without when we see it.

In-between processes like these are less rational than imaginative, less internally focused than looking for clues outside the self. What's up for grabs is what Ibarra calls "working identity," something formed first in images and only later expressed in ideas and strategy. Unlike ideas, images are always embodied, never abstract, and we know them only when we see them. Only then can we transform them into the ideas and strategies that can create careers and lives.

St. Ignatius Loyola experienced the same thing when he was in between his conversion and founding the Jesuits years later. While recuperating from a leg injury, he read about saints and was filled with a desire to do great deeds for God. Saints were different because they could imagine themselves differently, and, ever the pragmatist, Ignatius set out on a determined quest to find a new image of who he was called to be as a disciple -- the grace that's known only when it's revealed, seen and embraced.

To get his bearings, Ignatius retreated to a Spanish cave, from which he later emerged with an image of himself as a poor pilgrim on the road with Jesus, committed to the care of souls. His new identity led him to live perpetually in between the woundedness of sin and life-giving grace, false certainty and discerning love. After years of discerning, testing and revising this image, he could then share his identity as the servant pilgrim with others, and the Society of Jesus was born.

Years of tending to my own soul and trying my best to help others do the same in spiritual direction has convinced me that anyone who takes Christian discipleship seriously draws grace from the in-between places in our lives. Luckily, God acts like the Macy's salesperson, always ready to show us fresh images of grace to heal our blind desires for spiritual growth.

Taking a chance on these images of ongoing conversion requires us to live as a pilgrim like Ignatius, frequently feeling the itch for the greater good that reveals itself in between familiarity and faith, selfishness and selflessness, optimism and graceful hope.

Michelangelo's fresco of the creation in the Sistine Chapel is an image of how we live with God and find grace lurking in these in-between places. We see God and Adam reaching out for each other, but although their fingers come close, they never quite touch. Don't we also live suspended between wounds that are never fully healed and grace that's never fully lived, between who we've been in grace and intimations of fresh grace for the future? Don't we wait there -- with grace alone curbing our impatience and holding our impetuosity in check -- for images of grace we can live in, and out of which emerge the stories of our own rookie sainthood, our desire to do great deeds for God?

Initial images are provisional as they are provocative, and need to be tested and revised, rejected or accepted as justification for taking a calculated risk on a direction that might have first seemed a distracting detour. This is why discernment is indispensable for anyone seeking more loving commitment to the God who offers life eternal here and now.

That's when we see what that Macy's customer, Ibarra's career changers and Ignatius had in common: a desire for what makes life full, a gracious something we just can't live without. That's when grace becomes an active quest for fresh images of God and self that will come from even deeper in-between places, inspiring ever more faithful, creative opportunities for grace and love.

[Joe McHugh is the author of Startled by Grace: Wisdom from Unexpected Places. He has contributed to NCR in the past and blogs regularly at the American Catholic website.]

Spirituality | Knowing grace only when we see it

The rest of the story

Twenty-First Sunday in Ordinary Time: Being known by Christ