A message on mortality from an American in Paris 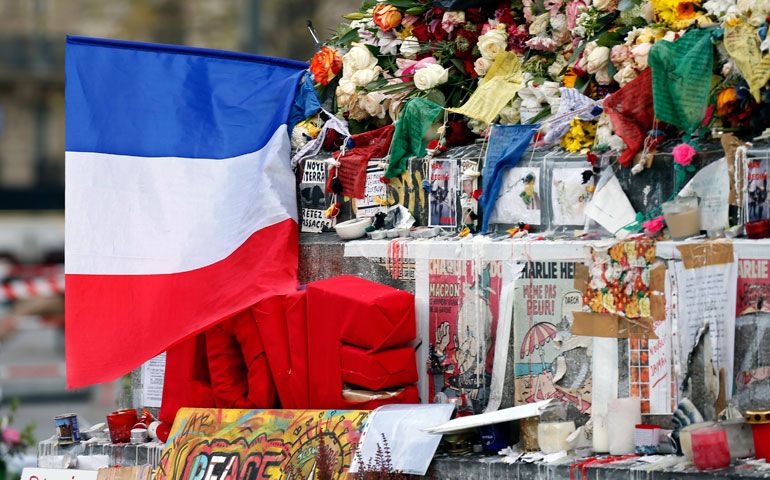 A French flag is seen among candles, flowers and messages in tribute to victims at the Place de la Republique in Paris Nov. 26. (Newscom/Reuters/Charles Platiau)

Usually I'm a prompt unpacker. But for some reason, I let the Paris suitcase I brought back home sit unopened for almost a week before, with a strange reluctance, I made myself unzip the lid and look inside. The familiar contents were a little creased and rumpled but otherwise unchanged since I had happily stowed them in the Samsonite 10 days ago, anticipating the prospect of the flight to France and the conference at which I was guest speaker.

Why the reluctance? Because now all that belonged to another world -- the one that ended on Friday, Nov. 13, 2015. Neither the suitcase nor I stopped a terrorist bullet; the hotel room we shared hadn't been rocked by exploding suicide vests or the street spattered with blood and worse. But we were there in Paris on that night, and the corner of my brain that has time to think about eternity is asking why.

Back in suburban Washington, D.C., I watched the TV news like everybody else as the Islamic State attacks and their gory aftermath were reported and repeatedly picked over, as if sheer volume of airtime could explain immeasurables like good and evil. And as I eventually started unpacking, unconsciously labelling each item as worn Before Friday or After Friday, part of me was gnawing at questions of chance and free will that CNN couldn't be expected to answer.

The suitcase -- faithful companion on scores of journeys to wilder spots than France -- held no answers. That is, until only one thing remained: a French flag, made of thick shiny paper and mounted on a plastic stick. The stick was now bent and the paper crumpled but as I held the flimsy, red, white and blue scrap, a pattern slowly formed in my mind.

I had arrived in Paris Nov. 11, and took the bus to the Champs-Elysées, where a thin line of spectators was standing on the pavement, looking downhill toward the Place de la Concorde. I had forgotten it was Armistice Day and the time was nearing 11 a.m., the moment of most solemn remembrance.

I could hear the drums of an approaching military band and soon the cavalry of the Garde républicaine came gloriously into view, rank after rank of snorting chargers and their splendidly uniformed riders, faces implacable under plumed helmets, sabers drawn. Suddenly, you could guess how it must have felt to be one of Wellington's infantry at Waterloo.

From the Arc de Triomphe came the notes of a bugle. A hush descended on the crowds as we remembered the fallen of Verdun and Normandy, of Vietnam and Algeria. After a long two minutes, the world came back to life and I dragged the suitcase the final hundred yards over the cobbles to my hotel.

I was still holding the paper flag a cadet had given me to wave at the cavalry. I was about to throw it in a convenient trash bin but instead stuffed it into my luggage, a sentimental souvenir that would surely find its way to the kitchen bin when I got home.

Now, as I finished unpacking, here it was in my hand. It certainly belonged in the Before Friday category, yet After Friday it had become the worldwide symbol of defiance in the face of terror. It deserved better than the recycling bin, so I stood it in the shell case that decorates my desk, alongside the Stars and Stripes that had been a gift at my U.S. citizenship ceremony.

There they stand as I write, a powerful symbol of unity, one the politicians on TV would eagerly seize upon to illustrate their brave words of patriotism, and even braver threats of bloody retribution. But as an explanation for the tragedy of Paris and the conflict that grows around us, this fails a less worldly curiosity.

So I thought back to the night of the attack, retracing my footsteps -- all 6.56 miles of them, according to my iPhone. Before the killing started, in the still coolness of a perfect Paris autumn evening, I made a small personal pilgrimage to the underpass at the Pont d'Alma. There was the approach road, down which 18 years ago the world's favorite, most beautiful and vivacious princess had sped, a long and hopefully happier life stretching ahead of her.

Then I slowly made my way to the opposite parapet, its granite sanctified by the scribble of a thousand poignant felt-tip tributes. I stared down at the exit ramp, up which Diana had been carried, her dwindling life now to be measured in minutes.

Across the Seine, the illuminated Eiffel Tower soared into the dark sky, the searchlight at the top sweeping a long cold beam over the city, shining briefly on streets where unseen gunmen were readying their Kalashnikovs.

Oblivious, my mind was still filled with memories of visits to Paris with Diana, of her laughter as the paparazzi motorbikes swooped around our car like bandits round a Wild West stagecoach. I like to think she was still laughing as the Mercedes smashed into the 13th pillar of the underpass.

With that picture occupying my mind, I wandered toward the nearest bus stop. I had my usual plan for a night alone in a friendly foreign city: ride a bus to anywhere, get off where the restaurants and cafés looked most inviting -- then take a long after-dinner stroll back to the hotel.

So I got onto the first bus that came along, destination anywhere. It took me to the delights of St. Germain and oysters at Brasserie Lipp. But had I not been lost in memories and had walked a little faster, the first bus to arrive would have taken me toward the Gare de Lyon, to restaurants where diners were about to be machine-gunned at their tables.

By such margins do we live or die. As I lay awake that night, listening to the sirens and helicopters and hoping the mayhem wasn't about to come in my direction, it was easy to take refuge in prayer. Some Scripture played on a loop in my head, connecting Verdun and Vietnam with the Alma tunnel and the carnage at the Bataclan and the Boulevard Voltaire: "Thou fool: this night thy soul shall be required of thee" (Luke 12:20).

Not required on the night of Friday, Nov. 13, of this fool anyway.

[Patrick Jephson served eight years as equerry and the first and only private secretary (chief of staff) to the Princess of Wales. Appointed lieutenant of the Royal Victorian Order for personal service to the sovereign, Jephson became an American citizen in 2014. He is founding partner of the Washington communications, reputation and protocol consultancy JephsonBeaman LLC.]

Spirituality | A message on mortality from an American in Paris

Lessons of age as I fall into being my mother