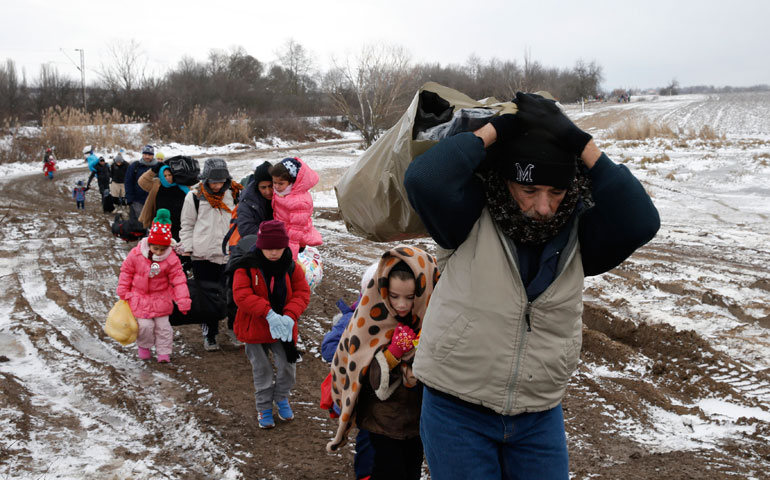 Migrants walk through a frozen field after crossing the border from Macedonia, near the village of Miratovac, Serbia, Jan. 18. (CNS/Reuters/Marko Djurica)

They are coming from Syria, Iraq, Afghanistan and countless other places that are difficult or dangerous to live in. They are mostly young men but many families as well. They have left behind everything: their jobs, their homes, their belongings, their security. They left desperate to get away from violence, war, the death of family and friends, the impossibility to find work to sustain themselves. They left wanting to find a safer place for their children to live and to grow up with some semblance of dignity.

They travel several routes to get to the West. Each route is challenging and risks the loss of their lives.

In Belgrade, Serbia, I met two Afghan boys, 12 and 13 years of age, following the Balkan Route, with the dream of going to London, where one boy has a relative. They were crossing into Serbia from Bulgaria, a place many migrants say is difficult and dangerous.

They were treated poorly. The police hit them. Thugs steal money and cellphones. The boys were in a vehicle with 20 people jammed together and jolting into each like dice being shaken by an angry hand. The driver, a smuggler, was drunk and speeding. Suddenly the truck turned over. One boy broke his arm. The other sprained his neck. But they were alive. Not all lived.

The boys expressed gratefulness for the support they are receiving in Serbia from Catholic Relief Services (CRS) and Caritas Serbia. "People care," they told me. "You feel respected."

Now they hope to get into Hungary, whose borders are closed, and eventually into Western Europe. They heard of mistreatment in Hungary and heard the country wants no part of them. Yet they want to go forward, following their dream.

These boys, along with nearly 300 mostly Afghans, were living in barracks CRS is refurbishing into space that gives some privacy and dignity to the refugees. There they feel safe and have their needs met.

In a CRS/Caritas Hellas center in Athens, I encountered two men who followed the Mediterranean route. Ahmed was from Syria and Assam from Afghanistan. Ahmed has five children, including a 15-day-old child, and Assam two children. Ahmed was a chef and owned a restaurant in Syria. Assam had very little schooling and did odd jobs.

Ahmed left because of the war in Syria. He teared up talking about friends who were killed. He wanted to get his family out. He was terrified, crowded in a small boat sailing from Turkey to Greece in stormy conditions. "We had to throw our belongings overboard so the boat would not sink. I prayed that if any of my family died, we would all die so we would not be separated."

Assam spoke of living in fear in his country and desiring only to get his children out of there so they could live a decent life and get an education, which he never got. His only dream was that they have a future. He would do anything to assure that.

Both men said that if those who fear and reject refugees lived in the conditions in which they lived, they would do what they did, get out as quickly as possible, regardless of the risk. No one can stand their children being in jeopardy.

They expressed countless times their appreciation to CRS and Caritas Hellas for saving them, for giving them dignity, for restoring their pride and self-confidence.

CRS is leasing empty apartment buildings in Athens for families awaiting resettlement. There are so many empty buildings after the economic disaster of 2010 that CRS can find reasonable rents to help people get out of camps, where they live in tents, and into some respectable housing.

At the dock in Piraeus, just outside of Athens, you see tent after tent on both sides of the road, housing mostly Syrian and Afghan families and young men. There are few services provided but many Greek people, in spite of their own economic difficulties, are helping provide food, medicine, clothing and other needs of the refugees.

You have to admire the Serbian and Greek people who understand they are their brother's keeper. When you see desperate need with the eye of your soul, you don't turn and walk away, but you stop, as did the good Samaritan, and you do what you can. Many are doing what they can, even though their own conditions are desperate.

One family living in a tent in Piraeus asked Carolyn Woo, president of CRS, "Why have you come? Was it only to take pictures, to feel good or was it to help?"

Haunting question! Why was I here -- just to look, to observe or to act? I remembered the words from St. James' letter: "Suppose a brother or a sister is without clothes and daily food. If one of you says to them, 'Go in peace; keep warm and well fed,' but does nothing about their physical needs, what good is it?"

All around us there is a needy world on the move, brothers and sisters desperately seeking a better way of life. I need to do what little I can to alleviate some of that suffering. We all do.

[Bishop Gerald Kicanas of Tucson, Ariz., is a past chairman* of Catholic Relief Services, the U.S. bishops' agency for responding to international humanitarian need.]

*This column has been updated to specify that Kicanas is a past chairman of Catholic Relief Services.

A version of this story appeared in the Aug 12-25, 2016 print issue under the headline: When the soul sees desperate need, it does not turn away.