Scripture scholars and church historians often point out the conflicts the historical Jesus and his first disciples experienced when their Jewish reform movement came into contact with the Roman Empire. 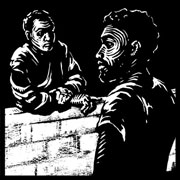 As Fr. Ed Hays frequently reminds us, “Jesus’ first followers imitated him long before they worshiped him.” Had they simply set up rituals and created dogmas to honor the importance of Jesus in their lives, hardly anyone outside their immediate circles would have noticed or cared. But as Hays observes, Jesus wasn’t just a one-man show. After his death and resurrection, they actually believed they were carrying on his ministry and his value system.

Believing in Jesus is relatively harmless; actually making his beliefs our beliefs can create problems.

Whenever Jesus talks about the “kingdom of God” or “the kingdom of heaven,” he isn’t referring to what’s going to happen after our physical death, but to what’s happening right here and now in our everyday lives.

But to surface God working right here and now, Jesus expects us to repent, to make his value system our own. The heart of Jesus’ value system revolves around making our relationships with God and others the focal point of our lives.

Such a belief automatically runs counter to almost any culture history has produced. That certainly was the case with Christians in the empire. Rome had achieved world dominance by force; it had developed the best-trained, most powerful army on Earth. It presumed those who benefited from its dominance would support and share the frame of mind and value system that had created it.

Jesus and his followers did neither.

Instead of force, Jesus taught peace; in place of strength, he stressed love and the weakness it naturally entails. His followers refused to serve in the Roman army.

Scholars like Marcus Borg remind us that the Romans crucified Jesus; a form of capital punishment normally reserved for traitors. By his actions and words, they presumed he was trying to create a counter-kingdom in which he, not Caesar, would be the people’s leader. Such an action constituted high treason.

No wonder, in the synoptic Gospels, Jesus’ response to Pilate’s question, “Are you the king of the Jews?’ is, “You say so.” In other words, “That’s what you say. I’ve never said that.”

Jesus’ negative answer in John’s Gospel is more nuanced. He basically says, “If you insist on referring to me as a king and accuse me of setting up a parallel kingdom, you’ve got to create new definitions for the two words. I’m not interested in having power over others. I’m concerned my followers learn the truth of God’s peaceful, non-dominating will for all creation.”

Today’s Daniel reading projects an apocalyptic vision of a benign, respected earthly leader, someone who could legitimately receive “dominion, glory and kingship,” the kind of leader “all peoples, nations, and languages [could] serve.” Though Jesus’ first followers were convinced he fulfilled that prediction, he did so in a unique way.

The author of Revelation stresses that he came to “make us into a kingdom, priests for his God and Father.” Jesus’ ministry doesn’t focus on acquiring power for himself, but on creating an environment in which each person discovers the power he or she already possesses: the power and dignity God instilled in us at the moment of our conception. That can only be accomplished by imitating his constant, generous giving of himself for others.

Historian Garry Wills frequently reminds us that within 150 years of Jesus’ death and resurrection, his followers began to buy into the very ideas and practices that were the grounds for his Roman crucifixion. Instead of witnessing an alternative way of looking at and living reality, the institutional church started to appropriate for itself the structures and philosophy of organizations that control rather than serve people.

Scripture is noted for being self-critical. Instead of condemning others, its authors constantly focus on fidelity to the covenant their readers made with God, with Yahweh in the Hebrew Scriptures and Jesus in the Christian.

Perhaps that’s the main reason we should use today’s readings to critique ourselves before we turn them on our enemies. If we don’t, we’ll never begin to affirm and live the world Jesus tried to create, a world for which he was willing to die.

Jesus calls us to follow him, change our lives