Today's solemnity brings up a touchy subject: Jesus' kingship. Some of the other Gospel readings proclaimed on this day actually tell us not to celebrate this feast, at least not in the manner we do.

Historians remind us that attaching such a royal title to the historical Jesus would have certainly brought about his death. The first-century people in occupied Palestine to whom he directed his ministry were restricted by law to have only one king (or Caesar): the Roman emperor. Anyone else who dared assume this title was not only an imposter, he would be immediately condemned to crucifixion for high treason. In those parts of the four Passion narratives in which Pilate questions Jesus about his kingship, the Galilean carpenter either denies it, or tells Caesar's representative he'd better get a new definition of the term. If Jesus is a king, he's totally different from the kings of his day and age. 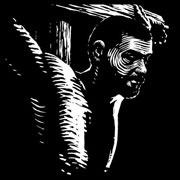 Parts of that new definition can be found in the historical environment of today's first reading. In Judaism's earliest day, Jewish kings were, by definition, expected to be different from their Gentile counterparts.

Under intense military pressure from the Philistines, 11th century B.C. Israelites began to realize they needed more than "judges," who just responded to individual crises. They needed leaders who would be on duty 24/7. After a prolonged debate over the pros and cons of kingship (1 Samuel 8), Samuel, the last judge, with Yahweh's begrudging permission, caved in and anointed Saul the first Jewish king. David would be the second. Though Saul never united all 12 tribes, David did.

As a Jewish king, David was expected to "shepherd" his people, not lord it over them. Unlike gentile potentates, he was to make the people, not himself, the center of his reign, to be an outward sign of Yahweh's care and concern, the champion of the helpless. Every Jewish king was especially expected to make himself available to widows, orphans and resident aliens.

Jesus' early followers were also convinced that God's care and concern for the helpless was demonstrated through Jesus of Nazareth's death and resurrection. Their conviction is clearly stated in the famous "hymn" that is at the center of our second reading. The Pauline disciple responsible for Colossians employs it to remind his readers about what lies at the heart of their faith. "God delivered us from the power of darkness and transferred us to the kingdom of his beloved Son, in whom we have redemption, the forgiveness of our sins."

Once our sins are forgiven, we stand before God on the same level with the greatest saints of heaven. Just as David united all Jews, Jesus unites all people. "For in him all the fullness was pleased to dwell, and through him to reconcile all things for him, making peace by the blood of his cross through him, whether those on earth or those in heaven." As Paul frequently stated, we all become the body of Christ.

Notice the contrast in today's Gospel between the type of king the Jewish "rulers" were expecting the Messiah to be and the kind of leader Jesus actually was and is. Prompted by the Roman inscription nailed above the crucified Jesus' head, his enemies logically taunt him, "If you are the King of the Jews, save yourself!" Real kings take care of themselves first.

Luke's Jesus responds by instinctively taking care of someone else.

"Jesus," the criminal crucified next to him pleads, "remember me when you come into your kingdom."

This completely different king responds, "Amen, I say to you, today you will be with me in Paradise."

It's important to note that only Luke's Jesus encounters a good thief. In the other three Passion narratives, both criminals go to their deaths cursing and berating Jesus. One of the reasons Luke introduces this particular person -- beyond his overriding interest to present Jesus as innocent -- revolves around his constant concern to show Jesus as a person for others. No matter the pain Jesus is suffering, he's always concerned for others' pain. Only in Luke's Gospel is Jesus depicted as worrying about what will happen to the women who mourn his crucifixion, and he alone has Jesus look sympathetically at Peter after his threefold denial. No other evangelist has Jesus restore the lopped-off ear of the man in the garden.

No matter what title biblical Christians attached to Jesus, they were confident they were dealing with someone who always focused on them, not on himself. Referring to him as king forced them to look at leadership from a different perspective, especially Christian leadership.

It's essential to know what Christ the King is all about, since we should be about the same things.


[Roger Vermalen Karban is a priest of the Belleville, Ill., diocese and pastor of Our Lady of Good Counsel Parish in Renault, Ill.]