Do you know what a talent is? In the biblical sense, it's not the ability to carry a tune or the instinct for making a fortune on the stock market. A talent is a measure of weight, specifically the typical weight of a soldier's pack, something in the range of 75 to 100 pounds. As it is used in this parable, it refers to the weight of the coins entrusted to three servants. The talents the master gave his servants made a heavy load of very valuable coins; one talent is estimated to be worth something like a million dollars in today's money. 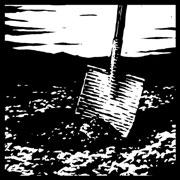 So, here we have a man whose cash on hand amounts to something like $9 million, not including what he needs for the trip. He hands it all over to three of his trusted servants, and, in case you didn't notice, he doesn't say anything to them about what they are supposed to do with it. He simply gives each of them a quantity commensurate with their ability. Then he leaves town.

We hear that the first servant "immediately" went to work and doubled the money. The second servant achieved the same result. But the third decided to avoid both risk and industry. What attitudes motivated their actions?

Clearly, all three servants had seen the owner at work. They understood how he operated and what he had done to earn his wealth. The first and second servants emulated the master. They did what he did and achieved similar results, doubling the fortune while showing their attachment to his enterprise.

The third repudiated the master and his occupation by hiding the money and ignoring everything he had learned in his service. In the end, the master judged that to be the worst thing any so-called servant could have done. By doing nothing he actually made a scathing critique of the master's whole enterprise. Given the master's affluence, that insult was far worse than the loss of potential profit from one mere talent.

Placed in the Lectionary toward the end of the church year, this parable urges us to evaluate our own service, to consider our attachment to Christ's enterprise, our investment of God's gifts and our longing to have a share in Christ's own joy.

Service need not be as dramatic as the task of managing millions. Today's reading from Proverbs presents an ancient description of a model servant of God: the valiant woman who is a "worthy wife." In this passage, we encounter a model we can imitate -- a simple, honorable woman of industry and character. No Joan of Arc or Teresa of Avila, she simply fulfills the human vocation, transforming nature's bounty into goods for both her family and the poor for whom she cares as her own. Her life and her works speak for her, encouraging those who know her to follow her example.

That valiant woman is, borrowing words from Paul's Letter to the Thessalonians, a daughter of the day, a woman "awake" like he encourages the Thessalonians to be. As Paul writes, his people are concerned -- as we all are, if we would admit it -- about "the end," whether that be their own death or the end of the world. So Paul writes to reorient their concerns.

One of the ways he does that is to make them think about the meaning of the time they have in life. They are asking questions about the "when" of Christ's return, and Paul wants them to think about what they and Christ want from that moment. He tells them that their concern about dates, what he calls chronological time, is relatively unimportant. Nobody can know the time or the hour. So what?

The important thing is kairos, or quality time. Kairos involves time's meaning and goal, the time we spend being conscious of and enjoying God's presence. We experience quality time when the clock stops, when a sunset captures us, when lovers lose themselves in one another. It's the time when we feel the presence of grace. Paul is telling his community that such time is the only thing about which they need to be concerned. It is that to which they must stay awake. Then, the "thief in the night" will be nothing more than a welcome surprise.

These three readings prepare us for the end of the year and challenge us to understand our life in terms of its ultimate purpose. We have all been given talents and time. Let's not bury them by watching the clock.

Seeking the faith of a convert