We are an Easter people 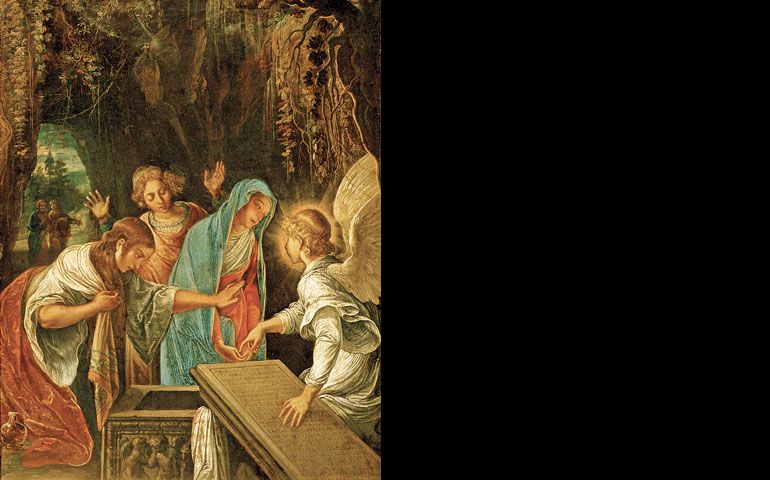 "The Three Marys at the Tomb of Christ" by German artist Adam Elsheimer, circa 1603 (Newscom/akg-images)

For many years, I kept a note card on my refrigerator that proclaimed the message: "We are an Easter people." I received the note from a parishioner, a mother of 13, grandmother of more, who was living with an advanced stage breast cancer at the time the card was written. In the week after Easter, Barb and some of her grandchildren had scripted this pink magic-marker message on a variety of her personal note cards and sent them to family and friends.

I remember opening this Easter greeting and reading it several times. It did not say "Happy Easter," nor did it say, "Rejoice, the Lord is risen." It said, "We are an Easter people." As I read the card, I knew it bore a message of profound faith. As her death approached, Barb wanted all whom she loved to know that the power of faith transforms even death. For we are an Easter people.

The note card kept its post for many years. It became a memorial prayer card for Barb and a daily reminder that encouraged a faithful life. In the face of illness and death, to be sure, this proclamation of faith is a consolation. Yet in all times, this proclamation holds the potential to be an everyday guide: We are an Easter people.

What then does it look like to be an Easter people? How are we to live? If we start at the very beginning and search the Acts accounts of the Easter season Scriptures, we learn how that very first community of Jesus' followers began to shape their priorities and create a way of life.

From the record of those early days, a modus operandi begins to emerge. Within the early community, "there was no needy person among them" (Acts 4:34). Those who had more property and wealth liquidated their assets and gave the money to the apostles to distribute to those in need. This may be startling information to our 21st-century selves, but nonetheless true.

As the community developed attitudes, rules and a self-image, the Spirit was at work among them. At first, the Jesus followers shunned the newly converted Paul. They feared that he had not changed and would turn on them. But they came to believe, with the help of their own Barnabas, that radical change is the sure sign of the work of the Spirit of Jesus (Acts 9:27).

Those early folks also had presumptions about whom God favored and loved the best. In time, they understood that God truly shows no partiality among humankind (Acts 10:34). All are equal in the sight of God. Finally, there was a clear message on that Ascension day that Easter people do not dawdle looking up at the sky but must live as active witnesses to faith wherever they are (Acts 1:11).

In response to these guidelines, we might say that times are very different now. We might add that the smaller size of the nascent community made sharing one's wealth a manageable practice, but not in our age. We might want to maintain our own exclusive practices, loving those who look and think as we do, judging those who do not. We might want to ignore the faith's invitation to radical change that invites reexamination of our own priorities, our words and actions, and even our use of time. We might want to say those things and more, but the truth of Scripture is ever ours, speaking anew to us each day, calling us to be truly an Easter people.

And they are the ones who gather their families in the face of approaching death and remind them that they are an Easter people.

We are the Easter people who believe that the cross transformed all suffering and pain, and the Resurrection secured the promise of eternal life. It is this paschal mystery, this Easter faith, that we are called to live each day.

[Peg Ekerdt is a pastoral associate at Visitation Church in Kansas City, Mo. This article first appeared in the April 2012 issue of Celebration, NCR's sister publication.]

Spirituality | We are an Easter people

Easter church attendance likely to be far behind pre-pandemic levels

Easter Sunday: Putting on the mind of Christ