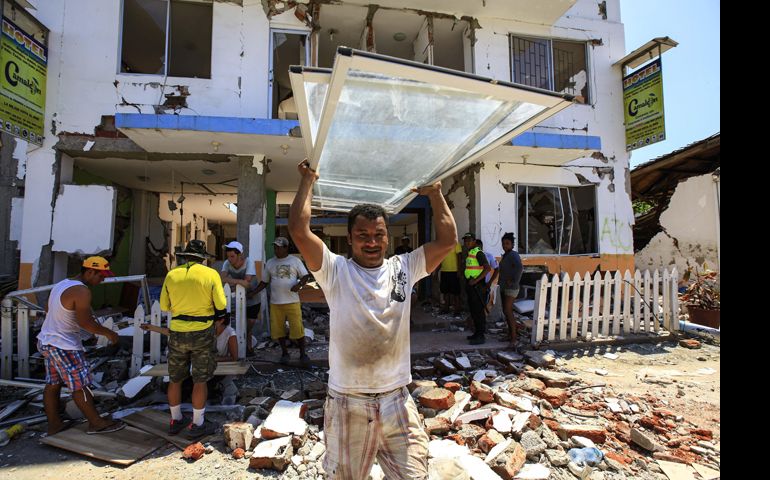 Residents recover some of their belongings April 25 from debris of a destroyed building in Canoa, Ecuador. (CNS/Jose Jacome, EPA, Reuters)

QUITO, ECUADOR — Catholic agencies are beginning to build temporary shelters for thousands of families in Ecuador made homeless by the South American country's worst natural disaster in nearly seven decades.

As the death toll continues to climb following a magnitude-7.8 earthquake, which struck near the town of Muisne on the Pacific Coast April 16, officials are assessing the scope of the damage and working to provide humanitarian aid to the estimated 350,000 people who were affected, including 26,000 who were left without homes. Church organizations have been distributing food, drinking water and mattresses, while trying to establish contact with small communities that were cut off when roads and telephone lines were destroyed.

"We're now up to 696 deaths and you can tell the psychosocial impact is serious,'' said Thomas Hollywood, director of Catholic Relief Services in South America. "They're trying to figure out what to do next. But the population is shell-shocked."

Hollywood said CRS is working in nine communities to distribute 10,000 tarps that will be used with local materials to construct temporary shelters. It is also providing psychosocial services and doling out hygiene kits to communities that have lost access to potable water, raising concerns about the spread of diseases like cholera.

"They're going to the river for drinking water,'' he said. "We're concerned about the spread of vectors, so we're trying to get ahead of it.''

CRS' initial response to the disaster comes as the Catholic Church and Ecuadorean government continue to try to reach small, rural communities where infrastructure was destroyed. Ecuadorean President Rafael Correa estimated last week that the disaster caused at least $3 billion in damage.

U.N. representatives and foreign ambassadors, including U.S. Ambassador to Ecuador Todd Chapman, were scheduled to visit affected areas April 26. The U.S. is providing more than $1 million in assistance initially, the State Department said. The U.N. has asked donors to pledge nearly $73 million for disaster relief in the next three months.

The destruction is spread across a large swath that includes some of the poorest provinces in Ecuador, a country of 16.4 million where 22.5 percent of the population is impoverished, according to the World Bank.

Complicating matters, the El Nino weather pattern is bringing more rainfall than normal, according to the Guayaquil, Ecuador-based International Research Center on El Nino Phenomenon. That has left hillsides vulnerable to mudslides, putting at risk the precarious housing in which some Ecuadoreans live.

"It's really three issues we're trying to address: Extreme poverty, the earthquake and the effects of El Nino,'' Hollywood said.

Alfredo de la Fuente, who represents Caritas in Portoviejo, a city of 250,000 that Correa visited after the quake, said rural areas are in need of more assistance.

"It's these small communities that right now need our solidarity,'' he said in a statement on the Caritas Ecuador website. "We need nonperishable food and mattresses, particularly. Reconstruction of the houses that were affected will come later."

Meanwhile, thousands of families continue to sleep outside, away from any structures, as aftershocks kept residents on edge, said Fr. Walter Coronel, a priest in the Archdiocese of Portoviejo.

"People are terrified, and we cannot provide all the assistance that they need," Coronel said. "There are some rural communities that we have no way to access, so we have no idea what is going on there."

Coronel said the archdiocese is providing food, mattresses, medicines and other essentials, but it has limited capacity.

"We have small staffs and the needs are way beyond what we can provide," he said. "In many areas, the church buildings have also been damaged."

Kevin Day, grants specialist in the U.S. bishops' office on the church in Latin America, said the Archdiocese of Portoviejo estimated $10 million in damages to church properties, including schools, convents and churches themselves.

"Based on experiences in other countries after earthquakes, I think it will be substantially more expensive than that," he said. "We're trying to manage expectations about how much this will cost and how long it will take. It will be a good 24 months before the rebuilding can take place."