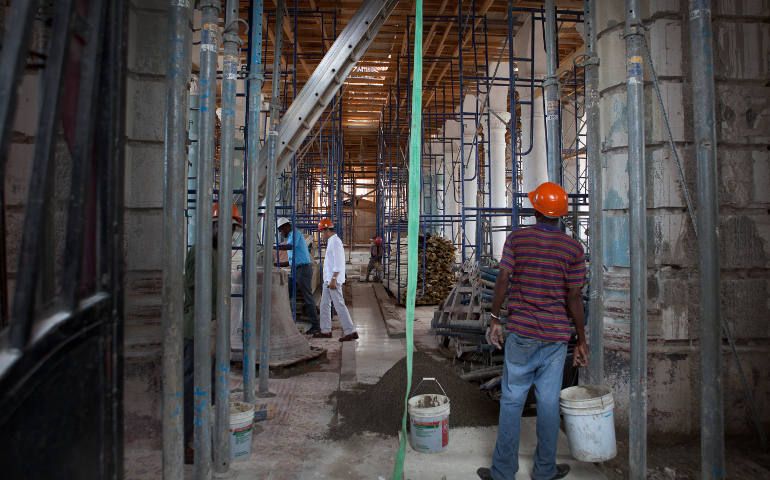 A worker carries a bucket in early September inside a church in Port-au-Prince, Haiti. Church and school reconstruction in Haiti has moved ahead with nearly $20 million allocated through the church-led PROCHE effort. (CNS photo/courtesy PROCHE, Haiti)

While significant, the number is small compared with the original 1.5 million people who were left homeless and dependent on international agencies for food and shelter in the weeks after the magnitude 7 temblor leveled much of the Haitian capital of Port-au-Prince and surrounding areas.

The number of people who remain homeless years after the disaster points to the continuing challenges facing the hemisphere's poorest nation.

The Jan. 12, 2010, earthquake, which the Haitian government maintains claimed 316,000 lives, served to raise the profile of Haiti around the world and prompted governments and aid agencies to work with Haitians in slowly building a nation from the rubble of destruction.

Even the Vatican is paying attention. The Pontifical Council Cor Unum, the Pontifical Commission for Latin America, and the Haitian bishops scheduled a Jan. 10 conference to revive interest and commitment to reconstruction. Participants will include Catholic and international agencies, as well as representatives from embassies to the Holy See.

"Is Haiti getting better?" asked Darren Hercyk, country director for Catholic Relief Services. "I can say yes, but it really depends on how people measure that."

Hercyk, who has been in Haiti for two-and-a-half years, cites new housing, an enhanced police presence, improved roads and better access to health care as signs that Haiti is overcoming the challenges that have plagued its 210-year history. For that, he credits the Haitians working through numerous international partnerships.

The rebuilding of St. Francis de Sales Hospital is one of the most visible projects in the capital. During the weeks after the quake, physicians, nurses and volunteers treated hundreds of injured people in field tents set up in the hospital courtyard because much of the facility had been destroyed. Planning began in 2011 and has involved CRS, Catholic Health Association of the United States and the Port-au-Prince archdiocese. The new hospital was to be dedicated Jan. 15.

"In the end it's the archdiocese's hospital. The archdiocese really sees this as a hospital that continues the tradition of a hospital for the people of Haiti," Bruce Compton, senior director international outreach at CHA, said of the $22.7 million project.

The process of rebuilding the hospital, first opened in 1881, was long, but allowed for closer relationships to develop between U.S. and Haitian leaders, Compton said.

Beyond the hospital, there has been the tedious task of rebuilding Catholic churches, schools and convents under the Partnership for Church Reconstruction in Haiti, or PROCHE. Trinitarian Fr. Juan Molina, director of the U.S. bishops' office on Latin America, said PROCHE has distributed nearly $20 million for reconstruction projects through October.

Again, Molina explained, the emphasis has been on sharing responsibility between Haitian church leaders and U.S., German, Canadian and French church partners for the dozens of projects completed or underway.

Haiti's Catholic school network also has received much-needed attention since the earthquake. The University of Notre Dame's Alliance for Catholic Education, supported by CRS, developed a plan to address the needs of students, teachers and local communities.

The Haitian Catholic Education Initiative has evolved in the dioceses of Fort-Liberte, Hinche and Les Cayes and has led to opportunities for teacher training, improved school governance and greater involvement of parents, said T.J. D'Agostino, alliance associate director.

Although the alliance was working in Haiti prior to the earthquake, the disaster exposed the difficulties facing Catholic schools, D'Agostino explained. With the encouragement of Haiti's bishops, the alliance and CRS surveyed schools across the country starting in November 2011 to identify their greatest needs, he said.

D'Agostino said the effort's initial success allowed expansion into the dioceses of Jacmel, Jeremie and Anse-a-Veau and Miragoane.

Despite progress on multiple fronts, more than 85,000 earthquake-displaced people remained in 123 camps around Port-au-Prince as of Oct. 7, according to the Inter-Agency Standing Committee emergency shelter cluster.

Ted and Katharine Oswald, a husband-wife team who share the position of policy analyst and policy coordinator for the Mennonite Central Committee in Haiti, told CNS that safe, affordable housing is one of Haiti's greatest needs. They expressed concern about the ongoing forced evictions from tent camps as property owners seek to reclaim vacant land.

"Saying 90 percent of people have vacated the camps is not a great representation of the true picture," Ted Oswald said.

The couple pointed to Canaan, a community of an estimated 50,000 to 200,000 people on the outskirts of Port-au-Prince, where there are no roads, sanitary services or dependable water supply. Thousands of people have relocated to Canaan after leaving some of the tent camps and are no longer counted among those displaced by the earthquake, Ted Oswald said.

Meanwhile, Haiti's still-young democracy is fragile. Protests in late 2014 resulted in the resignation of Prime Minister Laurent Lamothe, and President Michel Martelly was addressing recommendations from a special commission he appointed to an end an impasse over elections. Clashes have erupted in Port-au-Prince between pro-government and anti-government demonstrators; the national police have responded by firing tear gas to disperse the crowds.

Martelly was supposed to schedule municipal elections for 2011, but they were delayed as Haiti struggled to recover from the earthquake. Elections for a third of the Senate's seats and the Chamber of Deputies were to have been set in 2012.

Under Haiti's constitution, if elections are not held by Jan. 12, parliament will be dissolved, allowing Martelly to rule by decree.

The protests have gotten the attention of aid agencies, including CRS. Hercyk said the protests are "something we're watching."