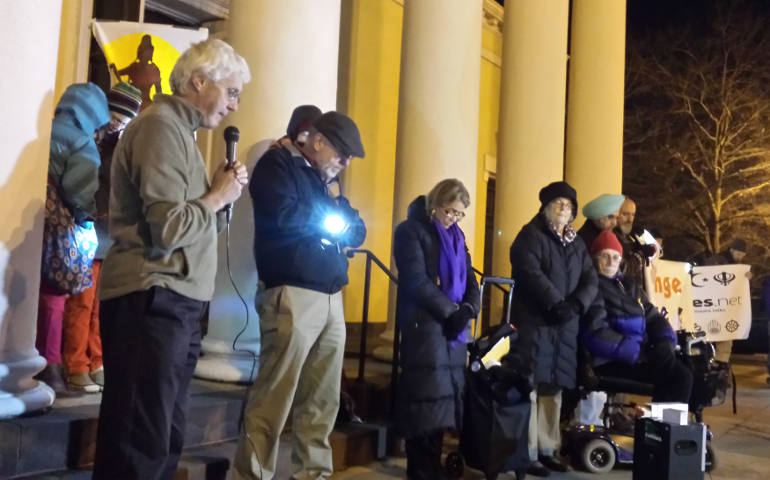 As the United Nations climate negotiations in Lima, Peru, entered its high-level negotiating period, lights of hope lit Sunday night around the world -- each carrying a prayer that the week would culminate with the foundation for an internationally binding climate agreement.

The #LightforLima vigils, held on four continents in 13 countries in 40-plus cities, were organized by Our Voices, an international multi-faith group seeking to increase the religious voice in global discussions on climate change. The vigils are the group’s latest action since it formed in the spring, and publicly signal how faith groups view the climate issue, said the Rev. Fletcher Harper, Our Voices project coordinator and executive director of GreenFaith.

“It demonstrates that people are willing to inconvenience themselves on this issue,” he told NCR.

On a night when the wind chill factor hovered in the mid-30s in Washington, nearly 100 solar lamps illuminated a block north of the White House, on the plaza outside St. John’s Episcopal Church.

“Creator God, grant that all who serve in positions of responsibility -- in economic, political, and social life -- and all women and men of goodwill will be protectors of creation, protectors of your plan inscribed in nature, protectors of one another and protectors of this Earth we call our home,” Notre Dame School Sr. Ann Scholz prayed.

The D.C. vigil, organized by the Franciscan Action Network, began with an interfaith prayer and included short prayers from numerous faith traditions: Jewish, Muslim, Catholic, Protestant, Sikh, Buddhist, Baha’i and Unitarian Universalists. As they lit candles and illuminated solar lamps (provided through an Our Voices partnership that also donated lamps to African villages without electricity), those gathered said a prayer for healing for all those have died or already been impacted by the effects of climate change.

That moment in particular resonated with Scholz, associate director for social mission for the Leadership Conference of Women Religious.

“These are real people whose lives have been lost or whose worlds have been turned upside down because of what we’re doing to the planet,” she said.

Under milder conditions five time zones away, around 30 people -- several barefoot -- gathered at the Church of the Crossroads in Honolulu’s Manoa neighborhood, near the University of Hawaii. For Carolynn Bell-Tuttle, a member of the United Church of Christ, the event held additional significance as her own Central Union Church held earlier that day an unveiling ceremony of its new 336-panel solar photovoltaic system.

“There was a moment [during the vigil] of 'wow, we’ve done really well today,' and then we have so much more to go,” she said.

The Hawaiian vigil was acutely aware of the impacts rising temperatures could have on the islands, spending a portion in discussion of what people most fear they might lose and what they most want to protect. According to the 2014 U.S. National Climate Assessment, warming oceans have already led to increased coral bleaching and diseases in tuna fisheries. Sea level rise will strain an already constrained freshwater supply, as well as increase coastal flooding and erosion – threatening infrastructure, agriculture and tourism on the islands.

“We really were trying to pray that [world leaders] make some very aggressive and dramatic changes in their approaches, because everywhere, everybody is being affected by climate change,” Bell-Tuttle said.

Elsewhere in Honolulu, more than 300 Micronesian people held their own vigil. In Wisconsin, the Franciscan Sisters of Perpetual Adoration offered 24 hours of prayer for the climate talks. Outside the U.S., #LightforLima vigils took place at the Sydney Opera House in Australia; at the prime minister’s Downing Street residence in London; in Tokyo’s Hibiya Park; at the Jaffa Gate in Jerusalem; as well as in India, Hong Kong, Nigeria, Canada and Scotland. The Catholic archbishop of Bangladesh told Harper in an email he asked all parishes to pray on Sunday for climate action.

Wherever the vigils occurred, they carried a similar message: more than a political issue, addressing climate change is a moral responsibility.

“If we believe that the earth belongs to God and not to us and that our planet Earth is alive with God’s creative energy, and if we believe God’s desire for all creation is the fullness of life, then that makes this a moral issue,” Scholz said.

Before the Lima climate summit began, Christiana Figueres, executive secretary of the U.N. Framework Convention on Climate Change, attended a Nov. 30 interfaith vigil for success at the conference. Since Our Voices launched last May, she has supported its efforts in rallying the religious community to give voice to the moral aspect of climate action.

Figueres is not alone among political leaders supporting the vigils. Patrick Carolan, executive director of the Franciscan Action Network, told NCR that he and others spoke about the vigils with the heads of faith-based initiatives at the White House and at the Secretary of State’s office, “and they’re aware of what’s happening and very supportive of what we’re doing.”

“I think people are hearing the message and getting the message. Whether that translates into action is another question,” he said.

In Lima, the high-level segment of negotiations began Tuesday, amid reports that the conference would set a record for the largest carbon footprint of such meetings (though to be offset by forest protection moves in Peru). The New York Times reported Monday that U.S. Secretary of State John Kerry is expected to arrive Thursday to push for a deal: "a sign of the importance that the Obama administration has placed on the outcome" of the U.N. talks.

That the U.S. and China announced ahead of the summit their own commitments -- the U.S. will reduce emissions 26-28 percent below 2005 levels by 2025; and China’s emissions will peak no later than 2030 -- has given rise to optimism that a deal might actually materialize. The talks are expected to conclude Friday, though negotiations in recent years have spilled into an extra day.

Harper hopes the Lima talks lay the groundwork for a strong agreement in Paris, one that includes:

In between the conclusion of the Lima summit and next year’s Paris meeting, the religious community, particularly Catholics, are expecting the worldwide discussion around climate change at some point to turn toward Rome, where the first solo encyclical from Pope Francis (Lumen Fidei was begun by Pope Benedict) will address issues of the environment and human ecology, and likely climate change.

Such a text could provide additional momentum, particularly among the Catholic population, toward a binding agreement.

“It’s really vital,” Harper said of Catholic engagement, pointing to its 1.2 billion members worldwide. “And I think this pope has a really transformative capacity. … It’s hard to overstate the importance of it.”

In the meantime, faith groups have begun planning their next steps. Our Voices has targeted March for its next day of prayer, possibly in conjunction with St. Patrick’s Day. They have also discussed a pilgrimage to Paris, to keep the climate on the religious agenda and raise awareness outside faith circles. Harper said he is encouraged that he has more recently seen greater participation from Muslim, Hindu and Jewish communities, noting in particular those vigils held in India.

Whatever the actions, Scholz said she anticipates “the interfaith community will continue to concentrate of prayer and the call to moral action.”

Added Carolan: “We just can’t sit back anymore, we can’t be afraid to preach it, use the prophetic voice of our priests and sisters to really talk about it. We have to do that and allow that to happen.”

“It’s not about God’s going to come and wave a magic wand and everything’s going to be better. We’re the ones who have to be the instruments of peace,” he said.

Editor's note: Want more stories from Eco Catholic? We can send you an email alert once a week with the latest. Just go to this page and follow directions: Email alert sign-up. And check back at Eco Catholic for continuing coverage of the Lima climate talks.