Can the church welcome the transgender community? 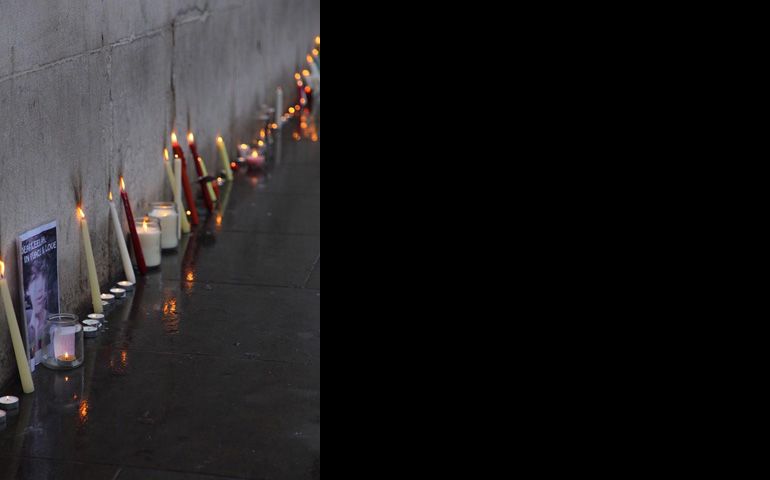 Candles rest against a wall after a Jan. 3 vigil in memory of Leelah Alcorn in Trafalgar Square in London. (By User:Excesses (Own work) [CC BY-SA 4.0 (http://creativecommons.org/licenses/by-sa/4.0)], via Wikimedia Commons)

"The only way I will rest in peace is if one day transgender people aren't treated the way I was, they're treated like humans, with valid feelings and human rights. Gender needs to be taught about in schools, the earlier the better. My death needs to mean something. My death needs to be counted in the number of transgender people who commit suicide this year. ... Fix society. Please."

The suicide note appeared on the social media site Tumblr, scheduled for publication shortly after a transgender teen walked onto an interstate and was fatally struck by a tractor trailer. The Cincinnati teen, born Joshua Ryan Alcorn, signed the message, "Leelah Alcorn."

The tragedy occurred in my own city, a community whose grief now reverberates internationally. Since the Dec. 28 suicide, #LeelahAlcorn began trending on Twitter, Google search results for "Leelah Alcorn" include a Wikipedia page, and the teen's memory was honored by "Transparent" creator Jill Soloway at the Golden Globes.

This public response underscores a growing awareness of the transgender community, one in which more than half of its youth attempt suicide at least once before age 20. Medical and psychosocial support for transgender individuals is slowly gaining traction; the nationally ranked Cincinnati Children's Hospital Medical Center, for example, has emerged as a pioneer in its establishment of a Transgender Clinic. In January, President Barack Obama made history as the first American president to name transgender people in his State of the Union address. And Pope Francis is reported to have pastorally ministered to a transgender man from Spain.

Beyond gender identity, Leelah's death has intensified debate on a host of related issues. Ongoing taboos around suicide and mental health have come under increased scrutiny. The teen's painfully public suicide has also fueled conversation on how social media platforms shape and can even dissolve apparent boundaries between private and public life.

In particular, Leelah's story poses significant pastoral, theological and moral challenges for the Christian community. The suicide note from Leelah, who was raised in a fundamentalist Christian household, recounts an experience of Christianity in which gender variance was communicated as being "selfish and wrong." This stance exacerbated a social isolation and despair from which she concluded: "The life I would've lived isn't worth living."

In a CNN interview, Leelah's mom, Carla, said: "We don't support that, religiously. But we told him that we loved him unconditionally. We loved him no matter what. I loved my son." Her use of male pronouns sparked intense emotional, even vitriolic, responses. The statement also highlighted a familiar tension between "love," "support" and "faith." How does love for a transgender person relate to support for a gender transitioning process? In what ways ought a Christian profession of faith inform this relationship?

As communities struggle to integrate a fuller understanding of gender identity, this journey often unfolds within a linguistic framework suddenly experienced as inadequate. Leelah -- Josh -- has left people stumbling over cracked names and pronouns, the fragments suddenly plunged into a sea of mystery. What does it mean to experience oneself as female or male? How do we -- or ought we -- express a gendered identity? In what ways can we define, even name ourselves? Tiny yet glaring pronouns protrude in our speech, cracked open alongside our hearts, our communities and our faith.

Catholics must engage these questions with a courageous and receptive heart. Such engagement demands a commitment to dialogue, one that springs from God's own dialogue with humanity as modeled in the Incarnation.

This dialogue manifests in a variety of forms. Certainly, it involves reaching out, listening, and seeking to understand transgender people. The dignity of naming oneself as a dialogue partner must also be honored and hopefully has been maintained in this column by respecting the teen's self-identification as Leelah.

Dialogue with the medical community is equally critical. With scientific evidence pointing to gender variance as a biological phenomenon, complex theological questions inevitably surface. In what ways are these emerging medical perspectives informing Catholic morality? How ought a scientific view on gender variance influence contemporary understanding of Catholic natural law tradition?

The church must also dialogue with families, parishes and Catholic schools seeking how to love and care for transgender youth. As transgender individuals remain underserved by our Catholic community, an increased commitment to developing adequate pastoral resources is desperately needed.

A constructive first step can be taken insofar as the church stands in public solidarity with the suffering of transgender people. This solidarity embodies an authentic Gospel witness that reaches out to the marginalized members of our human community. An initial openness to affirming this solidarity has been signaled by the local archdiocese in Leelah's city. Responding to a request for comment in this column, the archdiocese stated:

The Archdiocese of Cincinnati joins in the sorrow of the Alcorn family at the loss of their child. As Catholics, we recognize that all persons -- especially the most vulnerable in our society -- are to be accepted with respect, compassion, and sensitivity. It is tragic that this is not always the case. We pray for the deceased, for the Alcorn family, and for the entire community that has been wounded by this tragedy. May the Lord Jesus Christ, who is the source of peace, joy, and the fullness of life, welcome the departed into the heavenly kingdom and comfort those who mourn.

In addition, the archdiocesan spokesperson and communications director, Dan Andriacco, said that during the annual review of the Catholic Schools Office policies on discrimination and bullying, "transgender" would be considered as an addition.

As the Catholic church builds a relationship of dialogue with transgender people, it is important to remember that perfect love rests in God alone. As we seek to imitate this love in our dialogue with one another, may we humbly begin with asking: "Teach me, friend, how to love you."

[Jennifer Mertens recently completed her Master of Divinity from the Catholic Theological Union. She teaches religion at a Catholic high school in Cincinnati.]

Can the church welcome the transgender community?

The joy of love -- but not for everybody