Can women write the rules? St. Clare of Assisi did 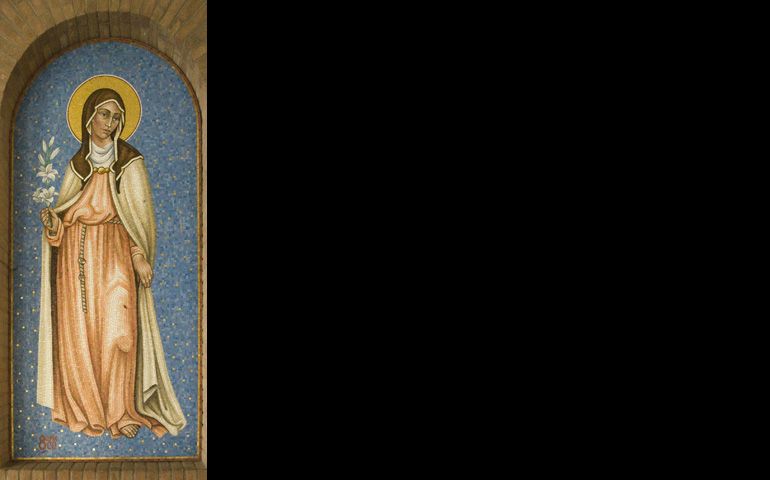 A mosaic in Rome depicts St. Clare of Assisi holding a palm frond, a symbol for her entering religious life. (CNS/Octavio Duran)

History tells us that Pope Gregory IX wrote the first guidelines for the women of Clare's community. But later, Clare took things into her own hands.

In fact, Catholic historians consider St. Clare to be the first woman to write a rule, or set of guidelines, for her religious community. At a time when most women's communities lived according to rules written by men, Clare's decision to compose a rule for her own community was a bold gesture.

It was also born out of necessity. Both the women and men of the early Franciscan communities felt that an authentic response to the Gospel could not be lived under the common rules of the day.

Sound familiar? It is. Ask a woman religious today, and you will likely hear a similar sentiment. The boxes into which the Vatican would like to place them do not allow many sisters to fully respond to the Gospel call. So after a lifetime of experience, women religious have begun writing a new path with their lives.

Their path is not without consequence. The same was true for St. Clare.

Her decision to write a rule was a radical departure from the religious norms of her time. Only after persistence did Pope Innocent IV approve it two days before her death on Aug. 11, 1253.

It should be noted that Clare did not compose her own rule without input from others. As she wrote a new way of living into religious history, her voice was in dialogue with the community in which she had spiritually grown. She modeled much of her rule on the austere and equally novel guidelines of Francis' community, recasting them to better fit women's experience.

Clare's rule displays the good that comes from a healthy dialogue between women and men. It is a model for our own times.

In fact, in Clare's rule, we find two fragments written by Francis himself that she incorporated into her own writing. The second fragment records his last wish for Clare's community: "I, little brother Francis ... beseech you all, my ladies, and counsel you, to live always in this most holy life and poverty."

He did not emphasize habits, cloisters or conformity. It was only Gospel living and holy poverty that, in the end, mattered to St. Francis.

The final sentence of his wish reads, "And watch yourselves well that you in no wise depart from it through the teaching or advice of any one."

Perhaps Francis anticipated that these bold women would be challenged later by church authorities in their way of life. Indeed they were.

A few years after Clare's death, Pope Urban VI charged a cardinal with writing a new rule for the Order of St. Clare. It seems radical rules written by women drew controversy 700 years ago. Women writing rules still do.

One can only hope that Vatican officials today under the watch of Pope Francis will have courage, like the original Francis, to affirm women religious in their efforts to respond to the Gospel. The ways of women religious may look different than what the Vatican envisions, but so did the Franciscan ways so many centuries ago.

Thank goodness for St. Clare, who both paved and penned the way for women to respond to the Gospel in their own voice. Thank goodness for the women religious of the United States, who seek to do the same today.

Can women write the rules? St. Clare of Assisi did

Oral history examines the austere lives inside the cloister