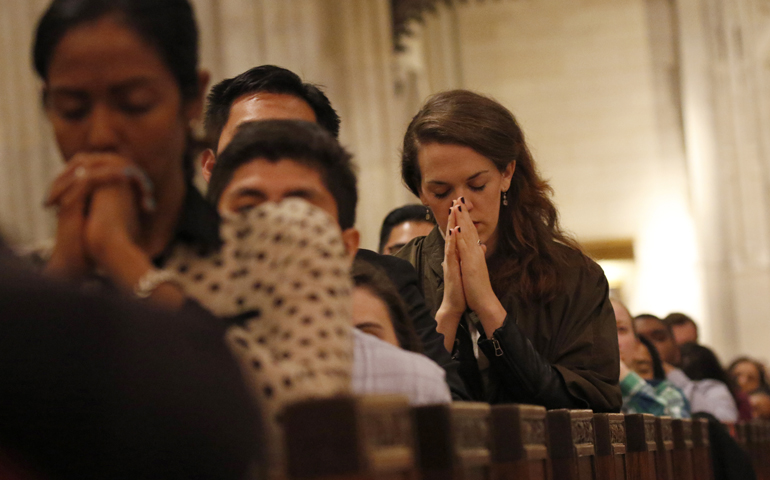 Where are the young people? It's a common question at Catholic parishes across the country, and soon church officials may understand why so many have left. The Vatican has invited bishops to fill out a questionnaire about young adults in preparation for the 2018 synod, which focuses on the theme "Young People, the Faith and Vocation Discernment." The questionnaire instructs bishops not only to look at the young adults who participate, but also at those who don't.

Among U.S. Catholics who have stopped participating and remain unaffiliated, nearly 80 percent did so before the age of 24, according to a 2009 Pew Research Center study. If bishops want to help the Vatican know why young adults in our country are leaving the church, they can start by looking at the research on Catholics who have left. They will find that it has less to do with a lack of belief and more to do with the fact that young people want a church they can believe in.

Confirming these earlier findings, a more recent 2014 PRRI poll showed that young Catholics feel that religious groups are alienating young people by being too judgmental about gay and lesbian issues. Among Millennial Catholics, 59 percent felt this was true and among Gen-X Catholics, 56 percent also agreed.

The 2009 Pew Research Center survey also reveals that young Catholics are leaving because of the way church officials treat women. Among Catholics who have left, 39 percent say their reason was due to the way women are treated. Even among Catholics who continue to participate, a large majority would like to see changes for women. As an example, 65 percent of Millennial Catholic women, both Hispanic and non-Hispanic, support women's ordination, according to American Catholics in Transition, a 2013 book written by William D'Antonio, Michele Dillon, and Mary Gautier.

U.S. bishops should also take note that sociologists have been tracking a concerning trend among Catholic women.

"Looking at our surveys over time, it has become quite evident that women's long-standing loyalty to the Church and commitment to Catholicism can no longer be taken for granted," note the authors of American Catholics in Transition. "On key indicators of commitment … Catholic women show a steep trajectory of decline over the past 25 years." The sociologists point out that a similarly dramatic decline has not been seen among men.

"Unlike their grandmothers and mothers, Catholic women born after Vatican II seem less willing to give the institutional church the benefit of the doubt and to stay loyal to the Church and Catholicism while hoping for change," the authors state. The sociologists point out that women's commitment may be waning significantly when compared with men because so many of the church teachings mentioned above affect women personally.

It is interesting to note that among the reasons Catholics gave for why they stopped participating, a mere 8 percent felt the church "drifted too far from traditional practices such as Latin Mass," according to the 2009 Pew Research study.

One might think that those who leave Catholicism were never "true believers." On the contrary, when former Catholics in the Pew Research Center study were asked to express their main reason for leaving, only 4 percent said that they "do not believe in God/Jesus." In fact, among people raised Catholic, both former Catholics and those who remain in adulthood report nearly equal levels of childhood attendance at religious education classes and Catholic youth groups.

We're not losing young Catholics who were baptized and never stepped foot in a church again. Rather, we're losing the youth and young adults who are sitting next to us in the pews this week and may not be back next Sunday.

In my experience, having worked with many young adult Catholics for more than a decade, those that leave the church often do so to preserve the spirit that resides within them — or their children. Young Catholics want to hold onto their integrity and feel they cannot worship at the altar of a religion that does not practice what it preaches. At other times, their reason for leaving is actually the preaching, when the message from the pulpit turns political or harmful.

If the bishops' upcoming synod hopes to speak to the heart of why many young Catholics leave, the response must go beyond creating new programs at the local level, new marketing, or new ways of engaging young adults, all of which are important. But church officials also need to address some of the deeper concerns which include structural injustices and harmful teachings that are pushing faithful young adults out the door. Meanwhile, many young adult Catholics, including myself, have committed to stay.

So next time you hear someone ask "Where are the young people?" Tell them we're here. Some had to leave, in good conscience or for their own well-being, but others are deciding to remain Catholic for the long haul. The reasons we stay are many including our love for the faith, our gratitude for the tradition, and the knowledge that if we work together, we can create a better church.

Sometimes I forget, but I try to remind myself that I'm following in the footsteps of another young adult, one named Jesus: a marginalized person of faith who showed his religion and his society that love, indeed, triumphs — even in the face of hatred, even over the power of death.

Today, I believe that many young adult Catholics are trying, in our own small ways, to do what Jesus did: to make sure love takes root and rises, in our church teachings, in our public policies. Perhaps never in my lifetime have I felt such a desire to stay united in Christ's legacy, working towards a society and a church we can believe in.