Revisiting wedding readings, for my first Father's Day as a dad 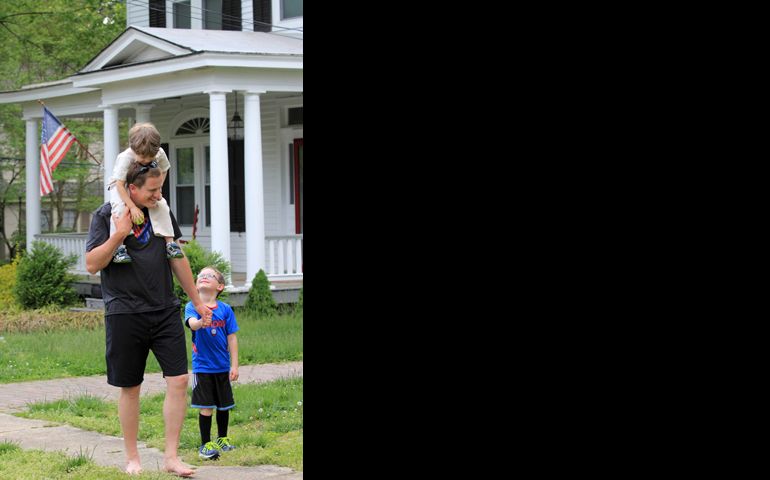 A father walks with his children May 3 along a sidewalk in Richmond, Va. Father's Day is celebrated Sunday, June 21 this year. (CNS/Jay Paul)

On a Saturday last June, after a daylong childbirth class with my wife, Genevieve, I drove up the New Jersey Turnpike to meet my dad for a Yankees game in the Bronx.

At the stadium entry gate, Dad told the ticket-scanner that we were at the game for "Almost Father's Day," since the holiday was the next day and Gen and I were about a month away from welcoming our first child. (He was able to make this joke and explain it clearly in the few seconds it took us to pass through the turnstile. I have trained in the ancient art of Dad jokes under a very accomplished sensei.)

Somehow, it's almost Father's Day again. This year has gone by in a flash, but that night at the ballpark also feels like a lifetime away. So much has changed since then: what Gen and I talk about, what we think about, what we buy on Amazon.com, what time we go to bed and what time we wake up in the morning, what we're afraid of, how we pray. It's hard for us to remember what life was like B.P. (Before Parenthood), and our daughter is just 11 months old. We have experienced a sudden vocational transformation that has affected our perspective on just about everything.

When Gen and I were preparing for our wedding Mass four years ago, before our daughter was even a figment, we picked Scripture readings that reflected some of the important values we wanted to build our family on. My first Father's Day as a greeting-card recipient is as good a time as any to look back at those passages and see what they mean to me now as a husband and dad.

At least for me, including this reading in our wedding was more aspirational than anything else. I'm not good at quiet. Pretty much every waking hour, I'm listening to music or a podcast, talking to someone, staring at a computer screen, or watching a TV show or movie. These days, you can add "reading Sandra Boynton books aloud" and "trying to get Sandwich to say a word" to the list. ("Sandwich" is what I like to call our daughter. She was Peanut in the womb, then Peanut Butter when she was born, then Peanut Butter Sandwich, and now just Sandwich.) Parenting an infant is noisy.

One of the very nice things about Sandwich is that on most nights, she hits the crib around 6:40 p.m. and is out for the night by 7 p.m. This gives Gen and me a few hours to unwind by ourselves. And how am I tempted to use this wonderful time? The same way I spend the rest of my day: by staring at a screen. There's nothing bad about auditory and visual noises in themselves, but the 1 Kings passage is a powerful reminder of the importance of quiet. Elijah is burned out and exhausted from his work as a prophet, and, to lift his spirits, God promises to appear to him. He shows up in this most unpredictable way, and Elijah is renewed.

Recently, a married couple we know told us about a custom they keep: One night a week, after their 2-year-old has gone down for the night, they have an electronics-free evening. No screens. This sounds hard but worthwhile. I like the idea of carving out some intentional screen-free time, which could free me from distraction and increase the odds of my noticing God's quiet presence.

Do not neglect to show hospitality to strangers, for by doing that some have entertained angels without knowing it.

Right before our wedding, Gen and I bought the house we'd move into after our honeymoon. I had unsuccessfully argued the "let's just consolidate into one of our one-bedroom apartments" position, since I am the least handy person I know and home repair freaks me out. What finally won me over was Gen's hospitality argument: We'd be able to host people more easily in a house than in a small apartment.

This truth bore out about two months into our marriage, when four delightful grad students we knew were forced to evacuate their house, which was located near a spot where a train had derailed and leaked toxic chemicals into the air and water. They stayed with us for over a week and decorated our first Christmas tree. Since then, the guests have kept coming, as our proximity to Philadelphia and the highways that run between Washington and New York City makes us a popular stop-off point. Hosting has been a real joy of our marriage.

But most house guests, you know, leave. A strange part of having a baby I hadn't thought much about is that now you've got a whole other person staying with you long-term. Good hospitality requires putting the needs of the other over your own wants, and parenting provides lots of practice in that form of daily sacrifice. It's the little choices that challenge me the most: Get down on the floor and really engage our daughter in active play, or hand her a toy she likes and then flop onto the couch and scroll through Twitter? Growing in hospitality means choosing the former more and more often.

Then he poured water into a basin and began to wash the disciples' feet and to wipe them with the towel that was tied around him.

Sandwich has recently moved into a phase that includes blowing raspberries on almost every bite of pureed food she's given, spraying it everywhere. If I am feeding her breakfast after getting dressed for work, I often put on a rain jacket to protect my shirt and tie. Before each meal, I soak a washcloth and set it on the table next to me so I'm ready to wipe down her face, hands, ears, eyes, and head when she's finished.

As gross as this can be sometimes, I really like caring for her in this way. She's so dependent on us and has this immediate need that I can fill. More and more, though, Sandwich is getting better at feeding herself. Her success rate in picking up a bit of solid food from her high chair's tray and getting it into her mouth on the first try has increased from about 25 percent to 99 percent in just a few weeks. This is very fun to watch, but it also makes me feel a little sad.

Jesus didn't wash his disciples' feet at the Last Supper because he wanted to feel needed and useful. As you can tell from Peter's reaction, the apostles clearly didn't think they needed it. Instead, Jesus washed their feet as a sign of self-giving love, giving them an example to follow and prefiguring the next day's crucifixion.

In my own case, Christ-like service has to be less about feeling like a good dad and more about truly wanting the best for our daughter. The real self-gift at meal time is to sit there patiently and watch her slowly make her way through her tray of blueberries, even though I could feed them to her much more efficiently.

On Father's Day, Gen or I will hold our daughter and try to keep her occupied during Mass. It'll be an hour of the week when all our vocations come together most distinctly -- spouses, parents, disciples. The words of Scripture in this Sunday's Gospel, just like those in our wedding readings, will encourage us to continue growing in self-giving love: "If anyone wishes to come after me, he must deny himself and take up his cross daily and follow me. For whoever wishes to save his life will lose it, but whoever loses his life for my sake will save it."

People | Revisiting wedding readings, for my first Father's Day as a dad

My family and the Sacred Heart