St. John of the Cross and our dark night of gun violence 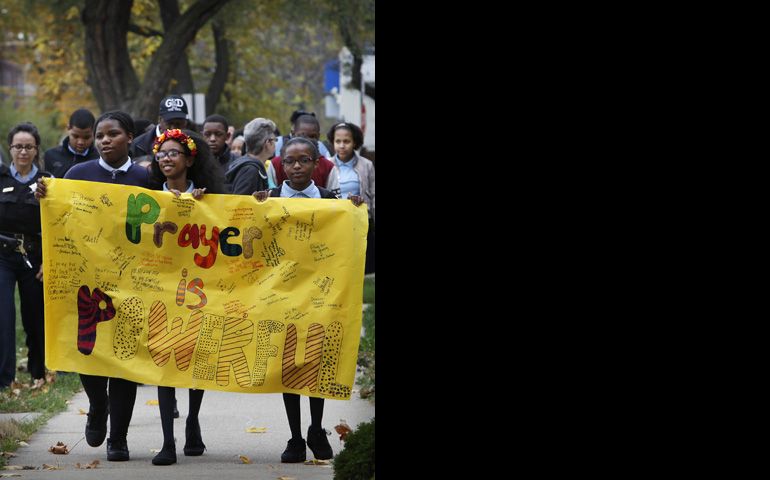 Students in Chicago conduct a prayer walk for peace Nov. 5. The walk was prompted by the Nov. 2 fatal shooting of a 9-year-old boy in a Chicago alley. (CNS/Karen Callaway, Catholic New World)

We are in the midst of a long, deep night. From police shootings to the attack on Planned Parenthood, people are again recognizing the nightmare of gun violence that prevails in our country.

When my own fears rise, I turn to St. John of the Cross as my guide: a man who knew the brutality of violence. He was also a man who entered into the dark night of the soul in order to find a path that pointed him towards dawn.

The overshadowing violence of John's day did not issue from the barrel of a gun, but arose from the brutality of the Inquisition, a powerful institution with seemingly unstoppable sway over Christendom. Similar to the consequences of modern-day shootings, the Inquisition's use of torture and public executions sent innocent souls trembling, wondering if they might be next. Unfortunately, John was.

In December 1577, John was arrested and imprisoned in a small cell by members of his own religious order. The religious officials were unhappy with John's reforms and used torture, the de rigueur discipline of the time, as a way to coerce John away from his reform principles.

There, in the middle of his long night, John encountered God, that he called the Beloved. He later wrote, "Oh, night that joined Beloved with lover, Lover transformed in the Beloved!"

In these transformational encounters with the Divine, John found the courage not to succumb to the violence or respond with violence. Rather, in union with God, he felt encouraged to move beyond his present circumstances.

Armed with prayerful assurance, John unhinged his prison gate and snuck past sleeping guards. Unfurling the sheets he had sewn together, he looked out from the threshold of a narrow window. Behind him stood the certainty of more violence. Ahead of him was the beckoning of an uncertain future. He leapt into it.

Not only did John survive his escape, but perhaps the biggest miracle is that he escaped with his values intact. After months of torture, he stuck with his convictions for reform. After nearly a year of violence, he still chose non-violence. Could we do the same?

Stripped of our sense of safety in recent months, many of us find ourselves trembling, naked in the knowledge of our country's vulnerability. Can we, too, face our night and emerge from this experience, not clothed in the false protection of more guns, but fortified in the strength of Christ? The Christ who tells his disciple to put away the sword?

It seems that most Catholics are ready to try. A 2012 poll shows the majority of Catholics (62%) support stricter gun laws that would lead to less violence.

And we're not alone. A poll in August of this year showed that 85% of people in the United States support expanded background checks, 70% support a national gun registry, and 57% support an assault-weapon ban.

Despite our country's own long experience of violence, could we be on the threshold of a more promising future? John's experience of union with God gave him the courage to step away from his fears and to move towards a new dawn. I only pray that the recent months may draw us closer to the threshold of change, as well.

Inevitably, there will be the naysayers who will call us crazy to leap into an untested future. But I trust that John of the Cross would call our move towards reform a holy leap of faith.

Justice | St. John of the Cross and our dark night of gun violence

Guns are an idol in American life. It's time for the bishops to say that.