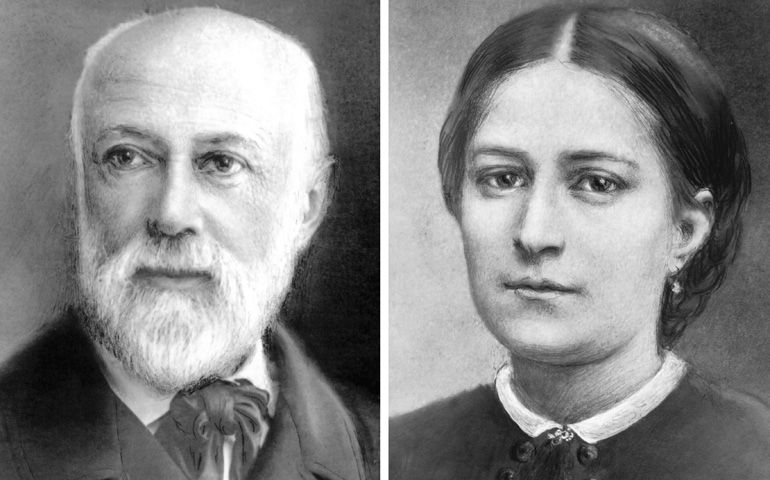 Louis and Marie Zelie Guerin Martin, the parents of St. Therese of Lisieux (CNS/Courtesy of Sanctuary of Lisieux)

Louis Martin was turned away from becoming a monk because he didn't know Latin. Zélie Guérin was rejected from the Sisters of Charity for her poor health. But one day on the St. Leonard Bridge in Alencon, France, Zélie discovered her vocation: Louis. It was love at first sight.

Zélie and Louis married just three months after they met. For the first 10 months, they committed themselves to chastity, intending to live out the religious vows they had originally desired. But a local priest encouraged the couple to have children. Soon, the first of nine children was born. The last child born to the couple was named Marie Francoise Thérèse, better known as St. Thérèse of Lisieux.

Zélie and Louis Martin were beatified, or declared "blessed," by the Vatican on Oct. 19, 2008. This year, the Synod of Bishops on the family came to a close on the same day. It is not a coincidence.

The Vatican intended to lift up the Martins, and placed their relics on display in Rome for the duration of the synod as a symbol of the Catholic family. Unfortunately, the action also signifies the Vatican's absence of family models.

The Martins are only the second couple in church history to be beatified together. The first couple was Blessed Luigi and Maria Beltrame Quattrocchi, whose relics were also brought to Rome for the synod.

Pope John Paul II beatified the Quattrocchis together on Oct. 21, 2001. It was a good first step for recognizing the holiness of intimate relationships, but they were the first and the only couple to be named "blessed" together out of the hundreds of beatifications and canonizations that occurred under his pontificate.

Moreover, to this day, no couple has been lifted to sainthood together. Both the Martins and the Quattrocchis remain "blessed," the third of four phases of the canonization process.

It seems impossible that church officials have never declared a couple, together, as part of its heroic community of saints. I think most people recognize that having a family is often a heroic and saintly act in and of itself.

As church officials leave Rome this week with plans to discuss the Vatican's teaching on families, I hope they also discuss its canonization of saints. If the church is to support families, then not only must our teaching change, but our models of holiness, too.

An official sainthood that lacks representation of couples and families demonstrates a church structure that views the laity as devoid of saintliness.

The church needs saints -- officially and unofficially -- who can model what healthy, God-rooted love looks like within a family setting. We need saints who are considered holy not in spite of being a family, but because they are a family.

When we do so, we will then more clearly see the holiness in the families around us: the family next door, the childless heterosexual couple, single dads, lesbian moms, or grandparents raising their grandkids.

When I think of holiness, I believe it is not only found in those like St. Augustine or St. Ignatius, who renounced their former intimate lives. Holiness is also found in those like Zélie and Louis Martin, who found God's love in one another and, in so doing, found Love at first sight.