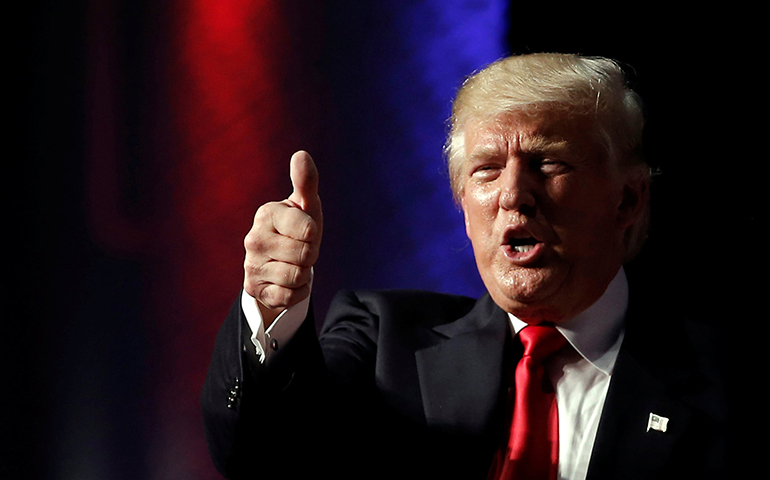 "When you're a star, they let you do it. You can do anything."

I have yet to find an adequate term to describe Donald Trump's horrifying video statements publicized last week. Dehumanizing. Misogynistic. A man who crudely boasts about sexual assault now stalks frightfully close to the American presidency.

"This is locker room talk."

Trivialize. Dismiss. Belittle. Cowering behind an incoherent jumble of defenses, Donald Trump is splitting open the deep wounds of a nation that now plummets towards a historic moral crisis.

As a religion teacher at an all-girls' Catholic high school, I find that Trump's candidacy poses an extraordinary kind of challenge. While I have long reflected on whether to write a column about the presidential race, my commitment to my students leaves my conscience with no other acceptable option.

Certainly, the glorification of sexual violence is not new to my teens. Time and again, I witness the symptoms of our rape culture as it infects the lives of our adolescent youth. I accompany remarkable, gifted young women who must navigate the toxicity of a hypersexualized teen media world. So many are trapped in cycles of self-loathing. I watch adolescent girls minimize, rationalize, and justify violence -- even against themselves. When substance abuse is mixed in, the risks are only heightened.

"I am beautiful. I am powerful. I am strong."

Many young women can hardly speak these words aloud. They have not been taught to name the power of God's Spirit within them, nor to celebrate their innate wholeness as it reflects the Divine image and likeness.

We practice and practice: "My body is holy. My body is sacred. I deserve respect."

It is no understatement. A girl needs to muster unbelievable inner strength to transform the internalized systems of oppression that our culture transmits to her. Along the way, she needs a family, school, faith community and nation that supports such a sacred unfolding.

Primarily, I have focused on nurturing girls as they build inner strength to reject the violent sexism embedded in contemporary teen culture. Must I now figure out how to support them in rejecting the violent sexism that descends from our nation's highest platform?

Trump's candidacy undermines my every attempt to nurture girls' dignity, self-worth, and spiritual wholeness. His language threatens my teens' fledgling self-confidence and demeans the respect they claim for their female bodies and sexuality. Our conversations about healthy relationships, consent and boundary-setting were trampled at Sunday's debate.

We cannot raise strong, confident, and spiritually whole young women in a nation whose presidential nominee condones violence against them.

Do not reduce this to party politics.

Do not imagine that Trump's language will go away -- even if he loses. We cannot project all our horror onto Donald Trump. He does not deserve that much credit.

Go deeper. Trump's comments are neither unique nor isolated. He did not invent violence against women. Rather, his crass language and cruel sexual innuendo is forcing our nation to confront what too many American girls and women already know. In insidious ways, rape culture, sexism and misogyny already infect many elements of American life.

Indeed, Trump's candidacy is only possible because it is embedded in a culture which systematically excuses, harbors and fuels gender-based violence. 1 in every 6 American women has been the victim of an attempted or completed rape. 1 in 3 teens face physical, sexual, emotional or verbal abuse from a dating partner. On college campuses, sexual violence has reached such epidemic proportions that the Obama administration has convened a White House task force to address the problem.

Ultimately, this election is not about Trump, but about the moral character of our nation. For Catholics, this election also challenges our basic faithfulness to Jesus' nonviolent Gospel witness.

In the midst of Trump's dangerous vitriol, where is the Catholic church? As a faith community, we must each prophetically denounce the violence condoned by Trump's candidacy and the threat it poses to human dignity and liberation. Ecclesial leaders, pastoral ministers, and all Catholic faithful: we cannot remain silent.

My students do not only hear the church's words. They also hear our silence. And when it comes to the scourge of sexism and sexual abuse, the church's institutionalized silence is deafening. Sadly, our silence also perpetuates a Catholic faith that is experienced as out of touch, even indifferent, to the practical and spiritual needs of young women.

In contrast, my students need a faith community that stands with them and for them. They deserve a church that unconditionally champions their God-given dignity.

In this, Pope Francis offers a contemporary model for placing the Catholic social tradition in dialogue with our nation's urgent justice issues. His 2015 congressional address, in particular, prophetically evoked our nation's founding commitment to human dignity, while sensitively engaging the complexities of the American political landscape. As Pope Francis' papacy transcends any single party platform, the U.S. church must offer a similar witness.

"When you're a star, they let you do it. You can do anything."

This threat is not going away, regardless of the results on Nov. 8. And so, we each need to ask: what alternative moral vision do we choose to craft in the wake of this presidential election? How will we confront and transform the insidious violence that Trump's candidacy has exposed within American culture?

We face a daunting task.

Each one of us must work to transform the hidden, yet accepted norms of violence and domination in our human relationships. This calls for a redefinition of unhealthy models of masculinity and femininity. It also invites us to address the intersectionalities between sexism and other forms of oppression based on race, class, religion, ability, sexual orientation and more. Each of these efforts -- and more -- will only flourish in a sacred space of mutuality, open-heartedness and deep listening.

Our nation is facing a tremendous holy work. Fortunately for my students -- and for all people that are dehumanized by a culture of violence -- we can begin right now:

"I am courageous. I am revolutionary. I am whole."

[Jennifer Mertens teaches religion at a Catholic high school in Cincinnati. She holds a Master's of Divinity degree from the Catholic Theological Union.]