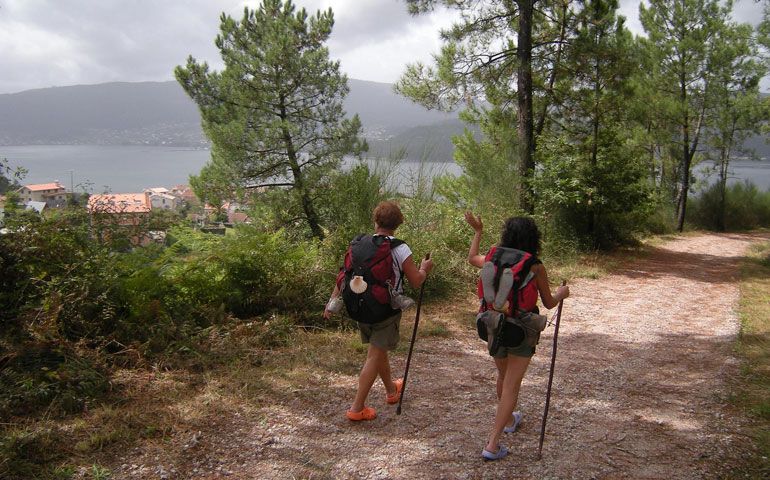 THE PILGRIM JOURNEY: A HISTORY OF PILGRIMAGE IN THE WESTERN WORLD
By James Harpur
Published by BlueBridge, 208 pages, $15.95

In 2010, more than 270,000 pilgrims walked the camino, the road to the shrine of St. James in Santiago de Compostela, Spain. Thousands more made journeys to Jerusalem and Rome, Taizé and Iona. All these walkers provide evidence that there has been a revival of interest in the ancient phenomenon of pilgrimage.

In The Pilgrim Journey: A History of Pilgrimage in the Western World, James Harpur, whose other books include The Atlas of Sacred Places and Revelations: The Medieval World, attributes this renewal to a desire for individual religious experience and a hunger for ritual in a world that nurtures neither. He sees pilgrimage, with its components of arduous journey and desire for personal transformation, fulfilling an innate need and hope and as such directly linked to the human condition. He quotes the Japanese poet Matsuo Basho: "Every day is a journey and the journey itself home."

In this engaging and readable book, Harpur describes the many and various expressions of pilgrimage, always linking them to the historical context in which they emerged. The sweep of Western history from Rome through the Middle Ages, with its elevation and then decline of church prestige, the Renaissance and the move out in overseas exploration, and the fragmenting of Christendom in the Reformation are all evident in the history of pilgrimage.

Similarly, each period, with its vicissitudes of war, plague, invasions and social upheaval, had its impact on how pilgrimage was enacted. Although the motivation for pilgrimage varied -- to give thanks, to do penance, to fulfill a vow, to gain a reward -- the wonder is that through 2,000 years of history, pilgrimage never disappeared.

Harpur begins with the sacred journeys of the pre-Christian world to Stonehenge and Sinai, Olympus and Delphi. The journey of the Magi commences Christian history, but as the new religion spread, pilgrimage sites emerged in the catacombs of Rome and sites of Christ's life in the Holy Land, especially Jerusalem.

As the Roman Empire disintegrated and travel became more dangerous, Celtic Christians and their wandering peregrini like Brendan and Columbanus undertook missionary journeys.

The rise of Islam and the later Viking invasions constricted pilgrimage for Christians, but the order brought by the reign of Charlemagne enhanced it. The Crusades linked pilgrimage to reclaiming Christian sites from the Muslims and enhanced pilgrimage in Europe by increasing the number of relics looted and transported home.

The apex of pilgrimage was the 12th and 13th centuries, when the journey became intimately connected to gaining one's salvation through penance, the acquisition of indulgences, and the necessity of access to holy relics. The abuses connected to this phenomenon ignited the drive for church reform and gave impetus to the Protestant revolt.

He explores pilgrimage as part of the Orthodox tradition, with its icons in the monasteries of St. Catherine in the Sinai and Rila in Bulgaria.

In considering the emergence of modern pilgrimage sites, he points out that many have been connected to apparitions of the Virgin Mary: Czestochowa, Poland; Medjugorje, Bosnia-Herzegovina; Lourdes, France; Fatima, Portugal; and Knock, Ireland.

While pilgrimage sites in the Americas are not as ubiquitous as in Europe, they exist. Offered as example are shrines to Our Lady of Guadalupe in Mexico City, Sainte-Anne-de-Beaupré in Quebec, Our Lord of Esquipulas in Chimayo, N.M., and Our Lady of Aparecida in Brazil.

Although pilgrimage is usually associated with a physical journey, Harpur points out interest in the inner pilgrimage undertaken in participation in the Stations of the Cross, the Ignatian Spiritual Exercises, or the reading of John Bunyan's The Pilgrim's Progress.

In a provocative afterword, Harpur raises questions for the pilgrim. Can a virtual journey be considered a pilgrimage? Can one be a pilgrim to a secular site, a garden, a museum?

What is clear is that he expects pilgrimage to survive because it responds to a human willingness to undertake physical effort for the opportunity for spiritual reflection and deepening of personal meaning.

If one is readying for a pilgrimage to Lourdes or Glastonbury, Patmos or Walsingham, in addition to bag, boots and Bible, carry with you, or read beforehand, this fascinating story. It will place your efforts and your desire in the grand scheme of a 2,000-year-old history.

[Dana Greene is dean emerita of Oxford College of Emory University. Her most recent book is Denise Levertov: A Poet's Life.]