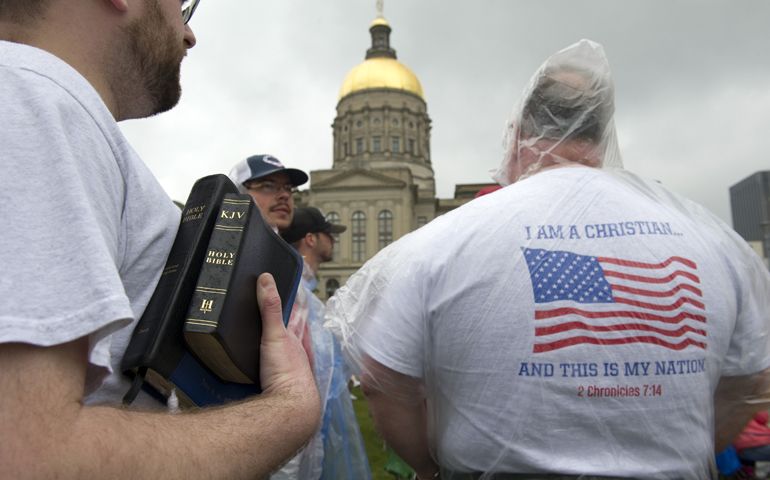 Robert P. Jones could not have asked for a more convincing, real-time affirmation of the principal thesis of The End of White Christian America than the June meeting of evangelical leaders in a midtown Manhattan hotel with Republican presidential candidate Donald Trump. If white Christian America is going through death throes, then the Times Square gathering was the patient conducting a desperate end-of-life negotiation with God: Trump as standard-bearer for conservative American Christianity.

Some have been put off by the audacity of Jones' title, given the limits he places on the subject under study. White Christian America (he uses WCA for short), it turns out, does not include Catholics or the Orthodox. It threw this reader a bit at first, but the exclusion, he makes clear, has nothing to do with a judgment of the groups' Christian bona fides.

Jones' universe of belief is the Protestant worldview that dominated and fashioned the generally accepted cultural religious presumptions in this country for several centuries. Many Irish, Italian, German or Polish Catholic immigrants in the last century, for instance, came to understand that assimilation required adapting to the ethics, values and politics that had taken root here, largely through the influence of WCA.

If WCA, comprising mainline and evangelical Protestantism, is less inclusive than the title suggests, the groups represent a large enough sampling to reveal clear mega-trends in religious belief in America and whether a certain religious influence on the culture is waning.

Jones, founder and CEO of the Public Religion Research Institute, has managed to transform the data columns of sociology into a compelling narrative. The bottom line: The religious landscape is shifting; what once was in ascendency is in a state of diminishment; and, in the current moment of disorientation and shift, the Protestant world, as well as the rest of the country, has lost its "ontological cartographer." What dies along with white Christian America is the "fiction of cultural homogeneity" upon which it was based.

There are many reasons that this is a valuable and timely work, not least among them that it uses accumulated research to bring a hard edge of reality to some of the fanciful and even romantic narratives floated about religion in the culture.

Contending with the demise of WCA means facing up to some of the myths that became convenient explanations of the drop in membership of mainline Protestantism. Often conservative Protestants saw that drop in membership as a vindication that "liberal" doctrine and practice were destroying the mainline. Studies, however, have shown that while mainline Protestant numbers "dropped earlier and more sharply -- from 24 percent of the population in 1988 to 14 percent in 2012" -- when the numbers stabilized, evangelical numbers began to slip a bit later. Evangelical membership went from 22 percent of the population in 1988 to 18 percent today.

The last time Protestants as a whole represented a majority of the country was 2008. By 2014, the "nones," or religiously unaffiliated, made up 22 percent of the population, the same percentage as Catholics, and Jones said there's no indication that the trend will fade anytime soon.

Certainly the landscape and the demographics have shifted, making the old maps by which WCA navigated the culture nearly useless today. But the future, if there is to be a coherent transition, must involve far more than updating a kind of religious/cultural GPS system. It is the ontological part of the matter with which it is most important to contend, and Jones points to the kind of introspection necessary to understand some of the deepest "whys" of today's decline.

It was at the apex of mainline and evangelical influence that things began to unravel. Jones uses three iconic Protestant edifices: the Interchurch Center on New York's Upper West Side; the United Methodist Building in Washington, D.C.; and the Crystal Cathedral in Garden Grove, Calif., as representative "of the white Protestant Christian hope and power that rose and receded over the course of the twentieth century."

Today, all of those buildings serve purposes different from those envisioned by their founders, yielding to "the realities of a swiftly changing country … and the steady diversification of the American religious landscape."

The repurposing of Robert Schuller's Crystal Cathedral is probably the most dramatic. In 2012, the Roman Catholic diocese of Orange County purchased the cathedral for $57.5 million -- Schuller's dream "decisively eclipsed by the twenty-first century's wave of multiethnic Catholicism."

History happens, even in a century that was supposed to display the unified power and influence of American Protestantism. Social movements around women's rights, against war, for civil rights, around the environment and on either side of the bitter abortion debate, the approval of gay rights, as well as the rise of evangelical Christians -- all did more to bare divisions than create consensus.

The deepest divide, however, is the one dramatized each week by what remains "the most segregated" time in America, the Sunday worship services of our racially divided congregations. The ongoing racial split is, in Jones' assessment, the one that continues to haunt in ways far more disturbing and debilitating than political differences.

No blueprint exists for becoming a multiracial church, he notes, and one of the major stumbling blocks in the way of accomplishing that is, quoting a study by Jennifer Harvey, author of Dear White Christians, "the powerful hold that 'reconciliation' has on the white Christian imagination."

The principle flaw of the "reconciliation paradigm" is that it moves people too quickly toward "a healed relationship" and skips over "attending to repentance and — more importantly — to repair." The difference is between an approach that demands an end, an immediate resolution beyond which one might move, and a reconciliation that results from a journey, where the traveling becomes as important as the destination.

If the repurposed buildings of WCA gave way to forces beyond their founders' control, they may also signify the future, seedbeds today of "unprecedented possibilities and opportunities," with projects and cooperation occurring in those environs that reach not only across denominational lines but also across the boundaries of major faiths.

Trump and the current election, not mentioned in the book, are relevant to the discussion at hand. In meeting with high-level evangelical Christian leaders, and solicitously mentioning "the evangelicals" at opportune moments, Trump is in many ways conducting the campaign of the past, summoning the ghosts of past giants and faded institutions. Evangelicals, in staking whatever political influence they may have left on a Trump presidency, may be placing their final and largest political bet.

While no one knows whether the death of WCA will lead to a resurrection of a new type of engagement with the culture, Jones imagines one in which the old participants of both the mainline and evangelical varieties "find their seats at the table alongside Catholics, Jews, Muslims, Hindus and the religiously unaffiliated." Only this time, he writes, "they will be guests rather than hosts."