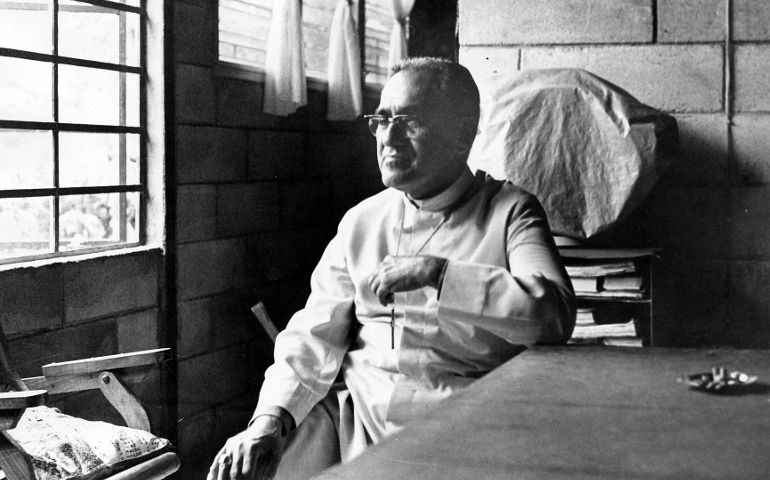 ASSASSINATION OF A SAINT: THE PLOT TO MURDER OSCAR ROMERO AND THE QUEST TO BRING HIS KILLERS TO JUSTICE
By Matt Eisenbrandt
Published by University of California Press, 256 pages, $29.95

For persons familiar with El Salvador’s painful modern-day history, Matt Eisenbrandt’s Assassination of a Saint: The Plot to Murder Oscar Romero and the Quest to Bring His Killers to Justice connects dots, fills in holes and provides a frontline account of the battle to bring accountability to those who plotted and carried out Blessed Archbishop Oscar Romero’s murder.

For those who know the martyr mostly by name and reputation, the 250 pages are a primer on the man and his ministry, as well as a remarkable synthesis of the passions, politics and players at work in El Salvador’s brutal last half century.

Other Salvadoran civil war atrocities are woven into the narrative’s fabric, such as the Dec. 2, 1980, rape and murder of church missionaries Ita Ford, Dorothy Kazel, Maura Clarke and Jean Donovan, and the 1989 murders of six Jesuits, their housekeeper and her daughter.

Work of death squads — torture, rape, mutilations, beheadings, massacres — is made vivid again, as is Romero’s courage in the face of government pressure, Vatican concerns and death threats.

Thus, Romero’s assassination is placed in a broader context, a larger picture: that of an organized, deadly campaign against church people and others speaking out for the poor and oppressed.

The core of Assassination of a Saint is detailing the why, how and who of Romero’s assassination. It delivers.

Eisenbrandt writes not from a front-row seat, but from the stage itself. As a 26-year-old new hire in 2001 at the San Francisco-based Center for Justice and Accountability, the young lawyer soon found himself immersed in the center’s investigation of Romero’s assassination, stimulated by the chance sighting of a key figure in Romero’s death.

A Salvadoran man working with the center’s human rights litigators spotted Capt. Alvaro Saravía visiting a San Francisco attorney’s office. In 1993, Saravía had been named one of Romero’s killers by the U.N.-mandated El Salvador Truth Commission.

The author would go on to become a member of the legal team to seek a judgment against Saravía in a Fresno federal court in 2004, and through that proceeding to provide the world with a fresh reminder of the savage era in El Salvador leading to and including the 1980-92 civil war. The war claimed some 75,000 unarmed civilians’ lives.

That Fresno hearing would, in the words of Center for Justice and Accountability attorney Nico van Aelstyn, quoted by Eisenbrandt, “help to establish one of the most important preconditions for societal reconciliation: the channeling of vengeance into the rule of law through the creation of historical record and the establishment of historical truth.”

Assassination of a Saint strives for the same, creating a historical record and recording historical truth. It succeeds well.

The book details the intense labors to locate Saravía and build a case against him. It is a dramatic tale that involves remarkable efforts by professional investigators, legal experts, human rights activists and others.

However, Eisenbrandt makes it clear that the larger objective all along was to expose those behind the murder, whether or not they would ever be brought to justice.

He does, even if names are not always named. Those would include the persons who financed the assassination; those who planned and coordinated it; the military/governmental structures that condoned it; and a justice system that left it never prosecuted, despite Romero’s status.

Early on, the author shares that he was startled to discover that “no one had ever written a book about Romero’s murder” despite the significant volume of material written on Monseñor, as the archbishop was popularly known. It took Eisenbrandt, now legal director of the Canadian Centre for International Justice, nearly a decade to do it.

The book makes a strong argument that Romero’s March 24, 1980, assassination greatly escalated the civil war, in that his death destroyed a rare force that stood as a bridge between absolutist factions. It also aptly describes and documents the United States’ central role in the conflict: shoring up a corrupt, oppressive government at best, underwriting savagery at worst.

Eisenbrandt and/or his editors deserve praise for the book’s organization, and appreciation for stylistic decisions such as judicially repeating sources’ first names or their titles or their function. How many times have you been reading a narrative only to be forced to backtrack through pages or scroll back miles to recall a character on second reference?

To augment that, at the beginning of the book, readers are provided with what is basically a game program that lists players by name and team, such as the Fresno legal team, a list of well-known oligarchs, an itemization of prominent business and government leaders. This is informative and helpful.

The volume also provides footnote and index sections, boosting its value as a text on Romero, El Salvador and Central America.

[Dan Morris-Young is NCR West Coast correspondent. All book reviews can be found at NCRonline.org/books.]