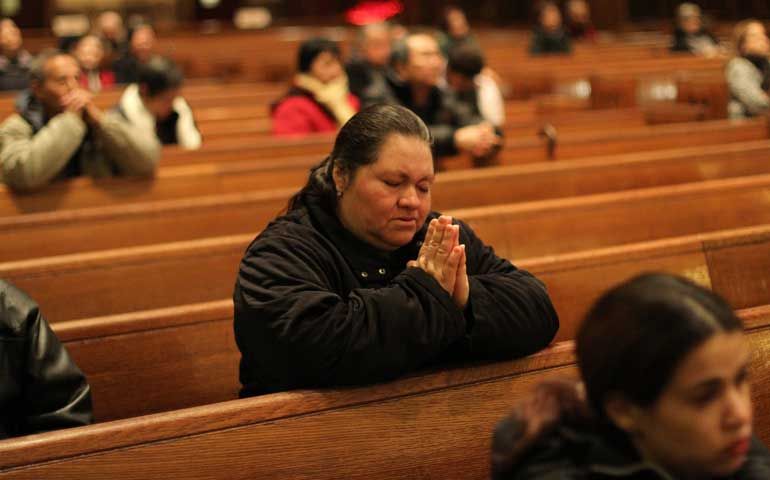 A woman prays during a bilingual Mass of Thanksgiving for the election of Pope Francis at St. Joan of Arc Church in New York in March 2013. (CNS/Gregory A. Shemitz)

THE CATHOLIC LABYRINTH: POWER, APATHY, AND A PASSION FOR REFORM IN THE AMERICAN CHURCH
By Peter McDonough
Published by Oxford University Press, $29.95

The Catholic Labyrinth: Power, Apathy, and a Passion for Reform in the American Church is a most unusual and remarkably provocative book, both in its thesis and in the way it is constructed. There are surely very few texts on "the state of the American Catholic church" in which bishops figure very little, the pope even less. There cannot be many written by someone quietly signaling liberal sympathies while being less than enthusiastic about the chance of real change. And this has to be the only one in which Jesus Christ, the Gospel and the Eucharist are remarkable by their almost total absence from the weighty 300 pages of closely argued but elegant and attractive prose.

Author Peter McDonough argues that since the Catholic community as a whole is mildly conservative and fairly complacent, the chances of an end to a moderately authoritarian and insistently hierarchical church are slim. Moreover, the fact that most contemporary Catholics vote with their feet on most if not all of the ethical teaching of the church, both sexual and political, reduces still further any righteous indignation for change.

As a teaching body, moral guardian or strong voice in the public arena, the church is largely irrelevant, but as a network of communities where people gather for worship and fellowship, it continues to be prized. The church will insist on teaching broadly conservative and patently inadequate sexual ethics while holding to the all-male makeup of the clerical leadership. Few will pay attention to the former, and not enough people really care about the latter.

One of the more original aspects of the author's argument is that he marginalized the effectiveness of both conservative and reformist pressure groups in today's church. While many think of the church as an intensely polarized community, McDonough's message is that these strong feelings only influence a minority, while the majority of Catholics just go to church and then get on with their lives without paying much attention to either left or right or, for that matter, the voice of ecclesial authority itself.

Conservative Catholic groups, of course, are very well-funded (the Knights of Columbus, Opus Dei, First Things magazine) and have figured out that their struggle is a cultural one in which old-time religion and "family values" blend into a coherent if not particularly influential ideological position. Influential, of course, with a minority of Catholics and, perhaps, a majority of Catholic bishops, but not especially with the mainstream, and destined, thinks McDonough, to fail ultimately to convince a body of believers suspicious of culture warriors and an ethic of sexual repression.

Reform groups, on the other hand, are passionate about internal ecclesial issues but far less well-funded (FutureChurch, Voice of the Faithful, SNAP) and quite disinclined to connect their various platforms to a wider national political agenda. Their cherished causes may find some support among the rank and file of the church, but not enough to inspire real reform.

Enter the National Leadership Roundtable on Church Management. This high-powered think tank of business leaders devoted to the slow but steady reform of management practices in the church seems to be the one organization in which McDonough has some hope for change.

The roundtable escapes categorization as either liberal or conservative and directs most of its energies toward the official leaders of the church. It works quietly and is moderately effective, perhaps by suppressing any of the characteristic impatience business leaders tend to feel toward less efficient enterprises. The organization studiously avoids the tabloid controversies in favor of direct work with bishops and clergy on practical aspects of better church management.

As the book progresses, the roundtable seems to get more and more of McDonough's attention, for all these reasons. If its approach is elitist, he seems to think, any success it has will trickle down to a better experience for Catholics as a whole.

For the vast majority of Catholics to whom the roundtable is unknown, this is clearly stealth reform. But even if it is effective, the product will be nothing more than a more efficient church and, just perhaps, what Bruce Russett once called "a decent consultation hierarchy."

The book could be strengthened and its argument modified by more attention to a few things that appear very little or even not at all. The Hispanicization of the church is mentioned only as an afterthought. The particular situation of younger Catholics, a smaller group that seems able to blend mildly evangelical sympathies with liberal views on issues of sexual ethics, immigration reform and the rights of women in the church, don't get much of a look-in at all.

Only in the very last pages does McDonough hint indirectly that the heart of the church is to be found in the structure of parish life, and especially around the liturgy. It is here that people with different views on many things are able, even likely, to show day-to-day concern for one another. This book has much going for it, but perhaps it underplays the reforming potential that lies in the message of the Gospel and the life of the community of faith.

[Paul Lakeland is the director of the Center for Catholic Studies at Fairfield University. His latest book is A Council That Will Never End: Lumen Gentium and the Church Today.]

The unknown underside of affluence

Leading us through the desert

Our unsettled age shakes the powerful