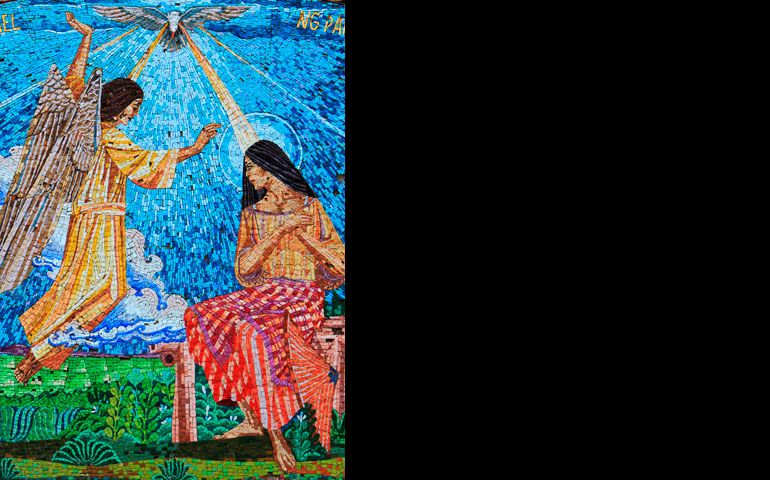 A mosaic in the Basilica of the Annunciation in Nazareth, Israel, depicts the angel Gabriel appearing to Mary. (CNS/Greg Tarczynski)

JESUS OF NAZARETH: THE INFANCY NARRATIVES
By Pope Benedict XVI
Published by Image, $20

A pope writing a book is an event for publishing and a risk for the papacy. Readers are a contentious lot, and the chances of criticism only increase when the topic at hand is the New Testament.

As Pope Benedict XVI approaches Jesus' birth, he fastens on the poignant image of Mary in Luke's Gospel. She listens to the strange news that the angel Gabriel announces, and freely accepts the burden of her unique pregnancy. "Through her obedience, the Word entered into her and became fruitful in her."

Benedict is aware of discrepancies within the infancy narratives (the first two chapters of Matthew and Luke). Informed by Gabriel of the impending birth, Mary says in Luke 1:34, "How shall this be, since I have no husband?"

"This question seems unintelligible to us," Benedict writes, because by this point, according to Matthew's Gospel, Joseph and Mary were indeed married, although not yet living in the same residence (Matthew 1:18). The thought that Matthew and Luke derive from different and sometimes incompatible sources does not appeal to him. What remains in his mind is a riddle or mystery.

Because he restricts his focus to the infancy narratives, Benedict does not compound the riddle. He does not ask why, elsewhere in the Gospels, the disciple Philip identifies Jesus as Joseph's son (John 1:45) and the townspeople of Nazareth have the same understanding (Luke 4:22). Those passages have made other scholars wonder; an entire tradition of ancient Near Eastern Christianity concluded that Joseph was Jesus' natural father.

Would Mary have been less obedient if that were the case?

At the end of this elegant little volume, Benedict indirectly suggests the kind of answer he would recommend to such questions. But because his horizon is the infancy narratives, and because he sees the historical task as understanding what texts say (rather than what lies behind them), he takes Jesus' miraculous birth as a fact.

Other discrepancies nonetheless emerge. Was Jesus born during the reign of Herod the Great (as Matthew says), or when (as Luke specifies) Quirinius oversaw a census as governor of Syria? If Matthew is right, Jesus had to have been born before Herod's death in 4 B.C. If Luke is right, the birth was in 6 A.D. In this case, Benedict does not refer to a mystery, but uses Matthew to correct Luke. That causes him to follow some scholars in backing the date of Christmas up a few years. He favors the story of the Magi tracking a star, and identifies that with a conjunction between Jupiter and Saturn. Yet planetary convergence is not rare; a later dating -- another scholarly option -- can be approved by observing the alignment of Saturn and Mars by Oct. 23 in 2 A.D.

Benedict does not wade too deeply into such weeds, yet he is well aware they are present. They occupy his mind enough that, at the end of his discussion of the Magi, he asks, "Are we dealing with history that actually took place?" He concludes, citing Cardinal Jean Daniélou, that no essential of faith would suffer if Matthew were more a theological meditation than a statement of fact, but that in the end history and interpretation are combined in Matthew.

Benedict finesses the issue of the relationship between event and interpretation because, in his reading, details matter less than the symbolism they evoke. The urgent question for him is how we can read the texts in such a way that we both understand what they said in their time and learn to take them into our own experience.

Nothing in the infancy narratives goes by simply as a matter of chance. Christ in the manger symbolizes, as Augustine taught, his presence in the Eucharist, sustaining the church. The texts are so situated within the Gospels that they draw us into the action. For that reason, Benedict also refers to extrabiblical traditions that can be recollected with benefit. The animals of the nativity are not present in the text, but no crèche would be complete without them. Less successfully, he tries to square Luke's reference to a stable at an inn with the later legend that Jesus was born in a cave.

Benedict does not present this newest volume as the series' completion. Rather, he says, this is the "small 'antechamber,' " not only because he is dealing with texts that were produced at the end of process of the formation of the Gospels, but because Benedict here lays out the principles of his interpretation. The paramount issue is how the Gospels amount to one whole Gospel: the announcement of who we are to be in relation to God. Gritty realities, such as what it meant for child to be born into Near Eastern peasant culture with doubts concerning his paternity, are not confronted, because they are not addressed in the stories.

Collectively, as the church, we are to be Mary "who holds heart and mind in harmony and seeks to understand the context, the overall significance of God's message." One of Benedict's predecessors, Gregory the Great, invited his audience to put themselves into the position of Mary Magdalene. Mary, the mother of God, is a more challenging model for any age, ours most especially.

In urging that template upon his readers' attention, Benedict has performed a profound service for our time, even as he has left to the side historical concerns that cannot escape the curiosity that is native to our epoch. He has met the challenge of interpreting some of the most contentious texts in the New Testament by means of the symbolic reading championed by Irenaeus and Augustine. While those early teachers thought that symbols stood on their own, without the need of history's backing, today any interpretation that avoids asking about actual events can give the appearance of special pleading.

[Bruce Chilton, Bernard Iddings Bell Professor of Religion at Bard College, is the author of Rabbi Jesus: An Intimate Biography and Mary Magdalene: A Biography, as well as The Way of Jesus: To Repair and Renew the World.]

Some praise, some doubts as Facebook rolls out a prayer tool