A closer look at Trent 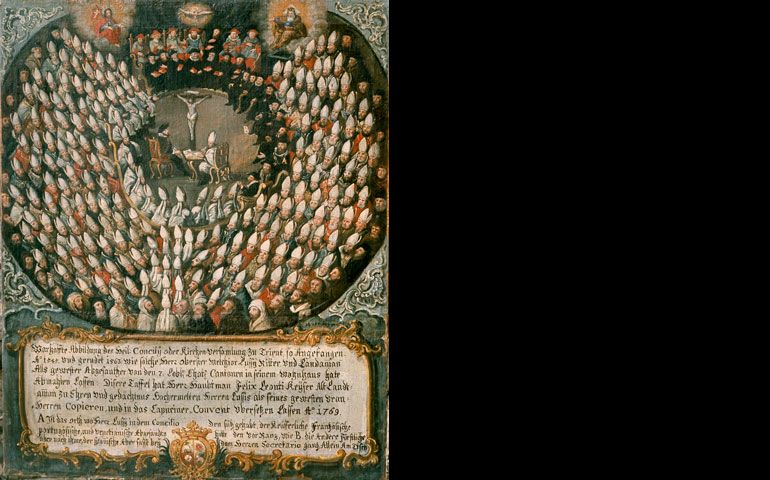 An 18th-century painting based on a 16th-century original depicts the Council of Trent. (Newscom/akg-images)

TRENT: WHAT HAPPENED AT THE COUNCIL
By John W.  O’Malley
Published by Belknap Press, $27.95

But first, class, let’s start with a quick review of our last lecture: Martin Luther challenged both the dogmas of late medieval Catholicism and abuses in the church (everybody say, “indulgences”), and he was excommunicated for his trouble. Ditto the other reformers, not to mention theologically inclined, if lascivious, monarchs like Henry VIII. With the Protestant movement gathering steam across Europe, a council convened in the northern Italian city of Trent, near the Austrian and Swiss borders, to fashion the church’s response. Meeting on and off between 1545 and 1563, this council would be the last one for three centuries.

For Catholics raised in the era defined by the Second Vatican Council (1962-65), the Council of Trent in the 16th century was easy to caricature as “the bad council.” Vatican II was so appealing -- pastoral, open-minded, at ease in the modern world even as it challenged that world -- while Trent was just the opposite: rule-bound, condemnatory and, well, just plain old. Trent had closed the church windows that Vatican II threw open.

Jesuit Fr. John W. O’Malley is one of our most distinguished historians of early modern Catholicism and also the author of the definitive one-volume history of the more recent council (What Happened at Vatican II). Now he returns to his home territory to give us a more nuanced view of Trent.

At Trent, traditional doctrines were restated; the number and the efficacy of the sacraments were reaffirmed; some new efforts, such as better education of priests in seminaries, were endorsed and took root. In all, a church that could be described as “Tridentine” (from the Latin name of the city) emerged and endured.

O’Malley shows that it was more complicated than this. To begin with, popes (there were five of them during the 18 years of Trent) had traditionally been leery of church councils. Ever since assemblies at Constance and Basel a century before had taught that an ecumenical council of the church was superior in authority to the pope, those who occupied the throne of St. Peter worried that a general gathering of bishops might undermine their own power. When Protestants and some Catholics alike spoke of the necessity for “reform of the head,” popes got nervous.

Renaissance princes that they were, they certainly needed reform. The author coolly points out, without dwelling on the prurient details, just how worldly were these popes, all of them with illegitimate children and grandchildren. Troubles might remain for the papacy today, but at least we no longer live in a church in which it is normal for a pope’s “nephews,” some of them as young as 12 or 14, to be routinely named cardinals. Thus, the popes wanted a council that would respond to the Protestant challenge but that would not limit their own maneuverability in the treacherous waters of European power politics.

In the push and pull of the council’s deliberations, neither ardent papalists nor reform-minded “conciliarists” got everything they wanted, but a decision was made early on that proved beneficial for the life of believers. The council determined that, for every document it debated addressing a fine point of theology, it would also work to eliminate some glaring abuse. This means, O’Malley rightly stresses, that Trent was both a “doctrinal” council and a “pastoral” one. For instance, great care and intellectual energy went into explaining the theology of God’s grace and how it worked, the central question raised by Luther. But effort also went into insisting that bishops actually had to live in the dioceses they governed -- imagine! -- and whose revenues they lived on. Priests had to live in their parishes, had to preach at Mass for the instruction of their people, and had to preside at the sacraments, particularly at marriages. Not all these matters were settled at the council, and several of the thornier issues were held over for the pope and his Curia to address after adjournment. In most cases, this meant that some proposed reforms -- Mass in the vernacular, the laity’s sharing of the Communion cup, and even the possibility of optional clerical celibacy -- died on the vine. But the council had nonetheless given impetus to the elimination of the worst scandals, enough so that churchmen of the next generation such as Milan’s Cardinal (and later, Saint) Carlo Borromeo (a papal nephew who really was a nephew) could set a new standard. In many ways, O’Malley says, Trent’s most important work was outlining an ideal “job description” for bishops.

It is in highlighting what happened after the council ended that O’Malley makes his most important contribution. He says both at the outset and in the book’s very last sentence that he wants to separate fact from myth.

Many things that later generations identified with the Council of Trent never even came up there -- the distinct creedal oath that priests were required to swear to well into the 20th century; the Roman Catechism; the missal that governed church liturgy until the 1960s. To identify these and other phenomena as “Tridentine” is wrong, he says -- later accretions rather than explicit teachings of the church at the council. In that way, the outcomes of Trent, like those of its successors (Vatican I, 1869-70, and Vatican II), must be seen as part of larger, ongoing historical projects. Once we are clear on “what happened at the council” and what did not, we can more readily distinguish between the essential and the changeable.

For a church that often thought it had somehow escaped history, this is an important reminder. We are fortunate to have so good a historian -- and so good a writer -- as O’Malley as our guide through these questions.

[James M. O’Toole holds the Clough Millennium Chair in History at Boston College and is the author of The Faithful: A History of Catholics in America.]

Culture | A closer look at Trent

Diaries highlight the daily ingenuity of the world's poor

In 'Remnant Christianity,' author offers solutions on how Christianity can adapt and adjust in a postmodern world