How the church turned toward religious freedom 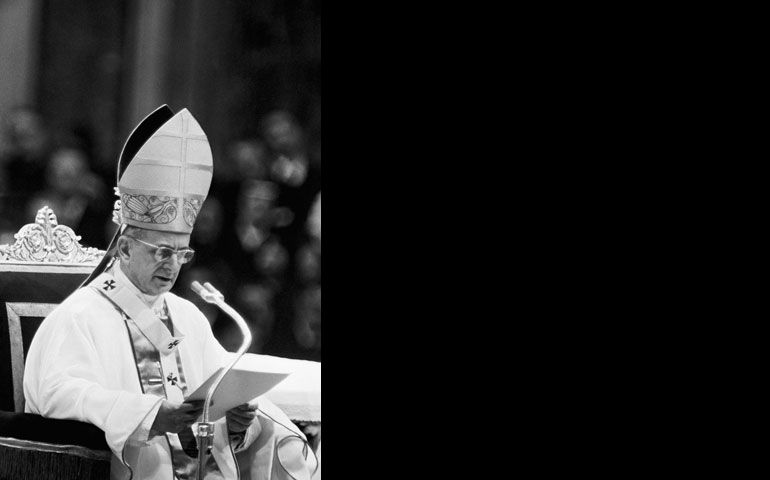 After four Fortnights for Freedom and multiple Catholic lawsuits over the contraceptive mandate of the Affordable Care Act, an observer might well conclude that religious freedom is a fundamental tenet of the Catholic faith. In Struggle, Condemnation, Vindication, Barry Hudock sets readers straight about how recently the Catholic church came to accept religious freedom at all and the fierce battles that preceded such acceptance.

Hudock weaves several plotlines into his narrative of the months and years leading up to the passage of Dignitatis Humanae, the Declaration on Religious Freedom at the Second Vatican Council. The first plotline is the story of John Courtney Murray, the U.S. Jesuit whose 17-year effort to bring about the development of Catholic teaching on religious freedom culminated in the passage of Dignitatis Humanae at the council’s final session in 1965.

Murray, ordained in 1933, was considered a brilliant theologian; he earned a doctorate in sacred theology at the Gregorian in Rome in 1937 and became editor-in-chief of the Jesuit journal Theological Studies at the age of 37. In 1945, he still held the traditional Catholic position on church/state relations and the concomitant condemnation of religious freedom for everyone except Catholics.

In 1948, however, Murray began to argue that although no law should support heresy, neither is the state, whether Catholic or otherwise, required to suppress it. The earlier Catholic teaching, which claimed that “heresy has no rights,” was time-conditioned, shaped especially by the French Revolution. Church teaching on religious freedom needed to be developed within the 20th-century historical context.

Over the next few years, even as Murray’s thinking on the question evolved, a number of powerful church authorities fought it.

By 1954, Murray’s superiors had forbidden him to publish anything further on religious freedom. This silencing continued until 1963, when Murray finally became a peritus, or expert, at Vatican II, having been passed over at the first session.

Murray then played a pivotal role in drafting the third and fourth versions of Dignitatis Humanae, though his historical-legal approach was modified somewhat in the final version, which had been formulated while Murray was ill.

Hudock shows that Dignitatis Humanae incited more controversy and politicking than any other Vatican II document. That Murray sustained two heart attacks and a collapsed lung during the council and died 20 months later suggests the degree of stress the conflict may have generated.

This was based in something called the “thesis/hypothesis” approach, in which the legal establishment of the Catholic faith is the ideal (the thesis). Nevertheless, where circumstances make this impossible, for example, when Catholics are in the minority, the non-ideal (the “hypothesis”) applies.

Murray rebutted the “thesis/hypothesis” argument by situating it within its historical context, the attack on the church by the post-revolutionary French secular state. He then located it along a timeline of other approaches to the subject, including the recognition of both church and state by the fifth-century Pope Gelasius, and the modern Anglo-Saxon model under which the U.S. church was thriving. A further developed teaching on church/state relations and religious freedom in the context of the 20th century was the logical result.

In the 50 years since its final session, Vatican II has been categorized in a number of ways: as a continuation of Vatican I; as a rupture in that trajectory; as an event; and as the manifestation of a new pastorally significant rhetorical style.

Although Hudock quotes one peritus to the effect that the debate over Dignitatis Humanae was the most violent of the entire council, Hudock basically gives the conflict over religious freedom a happy ending, with Murray and Paul VI concelebrating the Eucharist before the final vote and making champagne toasts afterward.

All of this leads to the current uproar over religious freedom spearheaded by the U.S. Conference of Catholic Bishops and its conservative allies.

It’s impossible to be certain what Murray would have thought about the bishops’ use of “religious freedom” to undercut the contraceptive mandate of the Affordable Care Act even in the face of a significant federal exemption for religious nonprofits. We do learn in Struggle, Condemnation, Vindication, however, that in 1964, Murray urged Boston Cardinal Richard Cushing not to oppose a bill pending in the Massachusetts legislature that lifted the ban on the sale of birth control and the provision of medical information about it. Murray argued that contraception is a matter of private morality. Cushing did not oppose the bill.

The last chapter of Struggle, Condemnation, Vindication recapitulates the conflict over religious freedom between Murray and his opponents from the 1940s through the final session of Vatican II. While the opponents claimed that Murray’s work marked a “very definite and radical departure from what has hitherto been regarded as Catholic doctrine,” Murray insisted he wasn’t questioning the doctrine, but the historically conditioned expression of it.

Based on these differences, Hudock concludes that “understanding the truth about God and God’s revelation to humanity is sometimes a struggle,” even for “those whose job it is to discern it.”

Somebody should send a copy of this book to each of the U.S. bishops.

Vatican | How the church turned toward religious freedom