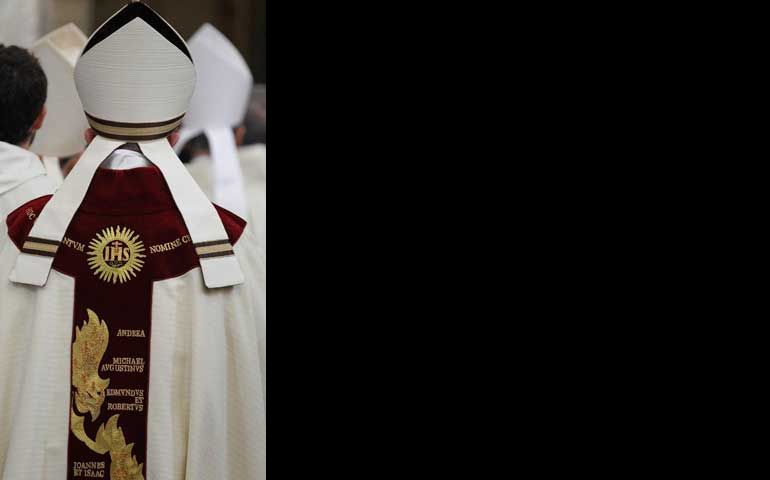 Pope Francis leaves after celebrating Mass with his Jesuit confreres at the Church of the Gesu in Rome Jan. 3. (CNS/Paul Haring)

INSIDE THE JESUITS: HOW POPE FRANCIS IS CHANGING THE WORLD AND THE CHURCH
By Robert Blair Kaiser
Published by Rowman & Littlefield, $28.80

Robert Blair Kaiser is an award-winning journalist known for his excellent coverage of the Second Vatican Council. A former Jesuit, he has written extensively about the church's liberal and conservative factions, although Kaiser tends to be more of the liberal persuasion. He knows and loves the church as a whole and has a special devotion to the Jesuit order.

Kaiser makes his feelings known in his 17th book, Inside the Jesuits: How Pope Francis Is Changing the World and the Church. Despite the title, the book isn't about how the church has changed so much as it is about how the church might change with a Jesuit at the helm.

The book offers a mini-biography of Francis, a history of the Jesuits, profiles of some outstanding Jesuits, and a memoir of Kaiser's own 10 years in the order. Highlights include the possibility that the 46-year-old Jesuit Fr. Jorge Bergoglio may have fallen in love while studying for his doctorate (evidence is flimsy); an exploration of the doctrines of sexuality and papal infallibility and how they skewered the thinking of the church; an examination of the controversies surrounding the careers of Jesuits like Pierre Teilhard de Chardin, Gerard Manley Hopkins and, most recently, John Dear.

As Kaiser sees it, the hierarchy has a limited tolerance for the Jesuit way. He notes, among other stories, that Jesuit Fr. Thomas Reese was fired from his job as top editor of America magazine under direct order from Cardinal Joseph Ratzinger for writing opinions not nearly as liberal as some espoused by Francis. (Reese now works as a senior analyst for the National Catholic Reporter.)

At times, according to Kaiser, the Catholic church bears more resemblance to the Pharisees and their legalism than it does to the message of Christ. One can blame it on the Curia, or Rome, or the College of Cardinals, or the old boys' network, or this or that conservative pope -- as Kaiser does. But the problem seems deeply entrenched and difficult to resolve.

There was a reprieve during the Vatican II (1962-65), when it seemed that Jesus' spirit of mercy would blow like fresh air through a dust-laden church. But the reprieve, as Kaiser shows, was short-lived. The windows opened during the council were closed under Pope Paul VI then nailed shut during the reigns of Popes John Paul II and Benedict XVI. Kaiser believes that Benedict's "negative leadership" put the church "into a tailspin" for eight years.

But in March 2013, when Cardinal Bergoglio was elected pope, subtle changes occurred. Taking the name of Francis (after St. Francis of Assisi), he signaled humility, simplicity and a whole new spirituality.

The new pope's preference for mercy was evident early on as he discussed Jesus' "striking attitude" and words of mercy. "We do not hear words of scorn, but only words of love and mercy," Francis said in a Gospel reflection on John 8 during his first audience on the Sunday after his election, "This word mercy changes everything."

In his apostolic exhortation, "The Joy of the Gospel," Francis emphasized a culture of encounter, as opposed to Benedict's "culture of death." In addition, Francis called for a worldwide survey -- and a synod -- concerning family life.

Francis eschews the fancy hats and the silk robes of his predecessors. He wears plain black leather shoes -- not the red favored by Benedict. He prefers to live not in the splendor of the Vatican's Apostolic Palace but in Casa Santa Marta, which Kaiser describes as a "Holiday Inn-style hotel." He takes his meals in "the Casa's modest cafeteria." Kaiser believes Francis' penchant for simplicity portends well for the future.

Although Inside the Jesuits seems to go in too many directions at once, Kaiser tries to keep a semblance of unity (and generally succeeds) by focusing on what he calls "the Jesuit DNA," a catchall term for qualities that he believes define a Jesuit: intelligence, creativity, courage and energy -- all put to "the greater glory of God."

Kaiser suggests that these qualities can be seen in Francis, whose emphasis on mercy indicates what he will stand for and what his effect will be on his church -- and ours. Kaiser also believes that the church under Francis will become more merciful and more like the church that Jesus Christ founded. Jesus stands for mercy, and so should his church. But that often is not the case.

Whether the situation can improve long term isn't clear at this early stage of Francis' papacy. But given everything that Francis has done so far, as well as his Jesuit DNA, Kaiser hopes for the best.

[Diane Scharper teaches English at Towson University. She is the author of several books including Radiant, Prayer Poems.]

Jesuits across Canada plan to rejoin into a single province