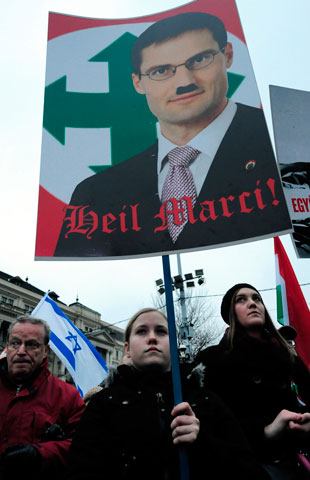 A young girl holds a placard at a demonstration against Hungarian far-right politician Marton Gyongyosi during a demonstration in front of the parliament building in Budapest on Dec. 2. Gyongyosi had called on the government to draw up lists of Jews who pose a “national security risk.” (AFP/Attila Kisbenedekattila)

Seventy years after murderously malignant anti-Semitism left 6 million Jews dead in the Holocaust, the disease is back with such vigor that the only logical conclusion is that it never left.

Alvin Rosenfeld, editor of this important, if depressing, new book, says it plainly: “A post-Holocaust antisemitism is today a fact of public life, increasingly so on a global scale.” And scholar Bruno Chaouat notes in one of the book’s essays that anti-Semitism, “though it has not disappeared, has had to morph and adapt to new contexts and ideological environments.”

What makes this so anguishing is that, as Rosenfeld notes, “The post-Auschwitz future was not supposed to turn out this way. Based on the assumption that the memory of the dead would serve to protect the living, educational, cultural, and religious programs on the Holocaust of every conceivable kind have been devised as a shield against future genocides.”

Across more than 500 pages, readers will encounter a drumbeat of anti-Semitic actions and thinking in many countries. Among them:

Yes, anti-Semitism has renewed itself and become, in some places, quite socially acceptable. But beyond that, a second Holocaust now is well within the range of imagination and, in our nuclear-mad world, quite possible -- precisely because before the 1940s Holocaust happened it was unthinkable. We know now such disbelief, though understandable, was naive.

Rosenfeld is an Indiana University scholar with whom I once served on a panel discussion and whose 2011 book, The End of the Holocaust, I reviewed and labeled “a sobering triumph of scholarship and insight.” This new book is of equal quality and comes as a bright flare of warning about the renewal of the ancient hatred of Jews, who number only about 14 million -- or .002 percent -- of the planet’s 7 billion inhabitants.

Although readers will get a taste of how the virulent, relentless anti-Judaism in Christian history helped to create the atmosphere in which modern anti-Semitism -- more racial than theological -- was possible, the writers focus on developments in recent decades from Norway to Hungary, France to Turkey, and Spain to Poland, where the Germans built six death camps in which about half the Jews who died in the Holocaust were murdered.

It’s a cruel story of an irrational contempt that seems always to find new fuel for its fire, whether it’s calumnies about Jewish conspiracies to rule the world or anti-Zionist polemic that goes far beyond legitimate criticism of some Israeli governmental policies to a demand that the country be destroyed and its Jewish citizens with it.

As essayist Elhanan Yakira notes, “In anti-Zionism, antisemitism has perhaps reached its final fulfillment; or maybe it has rejoined its ancient origins, being at first an obsession of the theologians.” Having gained acceptance with what Yakira calls “the intellectual,” anti-Semitism now has become “a respectable abomination.”

Indeed, the essayists offer example after example of how traditional Jew-hatred has morphed into something more subtle -- animus toward Israel that simply assumes that Jews (unlike any other group or nationality) have no right to a homeland. As Rosenfeld puts it in his careful introduction, it’s an animus that results in “efforts to demonize and delegitimize Jewish national existence in the State of Israel.” He calls it a “new version of Judeophobia.”

This new version may have subtle differences from the old versions, but philosopher and literary critic Bernard Harrison notes that “the central, guiding claims of antisemitism … are one and all delusional, and evidently so. … What antisemitism is, and always has been, indeed, is a system of rhetorically sustained delusions having no basis in fact and sound reasoning.”

And yet anti-Semitism thrives. There is more. Much more. The people who wrote these essays can be forgiven for not suggesting many plausible solutions. Sounding the warning was their task, and they’ve done it convincingly, with only small glitches. I’ll mention just one.

In her essay on Poland, scholar Anna Sommer Schneider often falls into the old trap of distinguishing between Poles and Jews when she means Jewish Poles and non-Jewish Poles. They’re all Poles. As I learned when my co-author, Rabbi Jacques Cukierkorn, and I spent time in Poland to write They Were Just People: Stories of Rescue in Poland During the Holocaust, separating people into Poles and Jews adds to the anti-Semitic perception that Jews there (they’ve been in Poland some 500 years) are parasitic invaders who need to be exterminated.

A version of this story appeared in the Apr 26-May 9, 2013 print issue under the headline: Renewal of an ancient hatred.