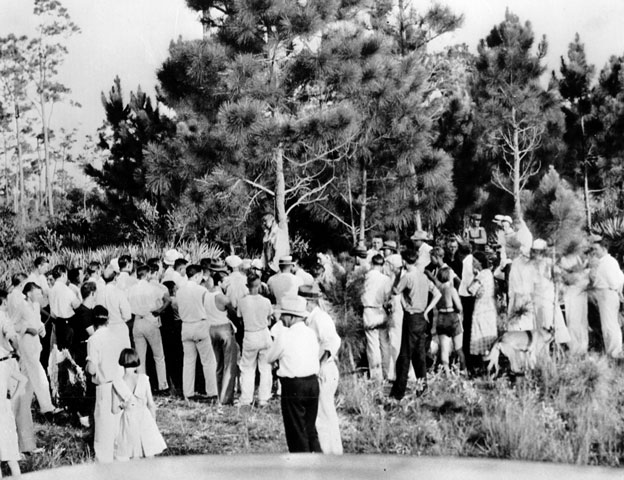 A crowd gathers to view the body of 32-year-old Rubin Stacy as he hangs from a tree in Fort Lauderdale, Fla., on July 19, 1935. Stacy was lynched by a mob of masked men who seized him from the custody of sheriff's deputies for allegedly attacking a white woman. (AP Photo)

THE CROSS AND THE LYNCHING TREE
By James H. Cone
Published by Orbis Books, 220 pages, $24

The Cross and the Lynching Tree by James H. Cone fills an important lacuna in theological scholarship. While lynching has been a research interest of Cone's for some time, he admits that he "avoided dealing directly" with a topic that "brought back such painful feelings."

Nevertheless, Cone, the father and dean of black theology, knew it was imperative that even this horrific chapter of our nation's history be recounted and theologically considered alongside the cross of Jesus Christ.

According to a recent New York Times story, nearly 4,000 named lynching victims met their deaths in 12 states between 1877-1950. Arguably the unspoken leitmotif of The Cross and the Lynching Tree is: Black lives matter.

From the first lines of the introduction, Cone bids his readers to juxtapose the cross of Jesus Christ and the lynching tree. Both are instruments of execution intended to terrorize and traumatize. Both sought to shame the naked victims who endured jeering and all kinds of insults.

Lynchings in the U.S. were spectacles -- crowds of as many as 20,000 were in attendance. Black bodies were tortured by being set on fire alive. Body parts were taken as mementos. Photographers took pictures -- some were made into postcards. Lynchings were pathological "ritual celebration[s] of white supremacy."

The first chapter is a testimony to the horrors of lynching. In 12 Million Black Voices, Richard Wright proclaimed, "Our churches are where we dip our tired bodies in cool springs of hope ... where we retain our wholeness and humanity despite the blows of death." Cone likewise gives personal testimony to his membership in the black church that enabled him to view the cross of Jesus Christ with new eyes.

Black preachers consistently and forcefully linked the cross and the Resurrection in their sermons, and Cone began to do the same. These experiences would forever influence his theology and spirituality.

The cross symbolizes God's triumph over sin and death, and the lynching tree symbolizes white supremacy. Cone captures the ethos of the lynching era by his deft integration of lyrics from the spirituals and the blues, excerpts from poetry, books and newspapers written by black artists and others, along with accounts of lynchings.

These words captured the tragicomic dimension of life that served to provide a type of balance, as is evident in lyrics from this blues song:

My burden's so heavy, I can't hardly see,
Seems like everybody down on me.
An' that's all right, I don't worry, oh, there will be a better day.
The sun's gonna shine on my back door someday.

The second chapter finds Cone turning toward one of his theological mentors, Reinhold Niebuhr, whose influence on political life in the U.S. is considered unrivaled. Cone queries why Niebuhr never spoke out passionately against racial injustice, specifically lynching. Cone notes Niebuhr's careful words about racial justice and wonders why this theological giant's realist approach to Christian social ethics did not evoke empathy and verve.

In fact, the author believes Niebuhr "showed little or no interest in engaging in dialogue with blacks about racial justice." Where was his anger and outrage?

Niebuhr had a heart for the Jewish people, but he was "no prophet on race" nor did he have the " 'heart to feel' [black suffering] as his own," Cone writes. While the Holocaust of the Jewish people was an abomination, chattel slavery and the lynching of African-descended peoples are also crimes against humanity.

Martin Luther King Jr. is the focus of Chapter 3. Cone has long celebrated King's "powerful religious imagination" that enabled him "to see redemption in the cross."

Through the lynching of 14-year-old Emmett Till in Mississippi in the summer of 1955, some in the black community began to experience the power of redemption in this Southern crucifixion. Mamie Till Bradley's decision to have a public viewing of her son brought thousands of people face-to-face with a lynched black body. This courageous act was an immediate catalyst for the modern civil rights movement.

King certainly understood the language of sacrifice and offering of one's self. King wrote, "There are some who still find the cross a stumbling block, and others consider it foolishness, but I am more convinced than ever before that it is the power of God unto social and individual salvation."

For Cone, King was able to "relate the message of the cross to the social reality" of African-Americans.

The fourth chapter is a celebration of many black artists who used their gifts to shed light on Christ's multiple Southern crucifixions. These poets and writers understood and captured the anguish and the angst that lynching spawned in the black masses.

Cone maintains, "Black artists are prophetic voices whose calling requires them to speak truth to power."

In the fifth chapter, Cone acknowledges the women: lynching victims, anti-lynching activists, and theologians. The chapter opens with the tragic story of the very pregnant Mary Turner who objected so vigorously to the mob taking her husband to be lynched that she too was lynched. Turner was hung upside down, doused with gasoline, and her naked body was set on fire. Lastly, someone came forward and expunged the life of the baby.

Cone acknowledges how unnamed women with families were often unable to flee areas because of their children. Like the biblical Hagar, these women knew that their path to salvation was to set their sights on survival and quality of life.

In the concluding chapter, Cone testifies, "The lynching era was the Heart of Darkness for the African American community ... when fragments of meaning were hard to find."

The majority of the community found solace and a modicum of meaning in their religion. For Christians, "The cross [was] an 'opening to the transcendent' for the poor who [had] nowhere else to turn."

In an age where the killing of unarmed black men, women and children by law enforcement in the U.S. is becoming a regular occurrence, as is the mass incarceration of black and brown bodies, it is important that we face our national history of lynching black bodies, sustaining white supremacy, and minimizing or denying black pain. Cutting through the silence and inertia, some must cry out, "Black lives matter!"

The lynching tree is a metaphor for white America's crucifixion of black people. It is the window that best reveals the religious meaning of the cross in our land. In this sense, black people are Christ figures. ... If America has the courage to confront the great sin and ongoing legacy of white supremacy with repentance and reparation there is hope "beyond tragedy."

The Cross and the Lynching Tree is an important gift bequeathed to us by Cone, black theology's most important truth-teller.

A version of this story appeared in the Mar 11-24, 2016 print issue under the headline: A horrific chapter of our nation's history.