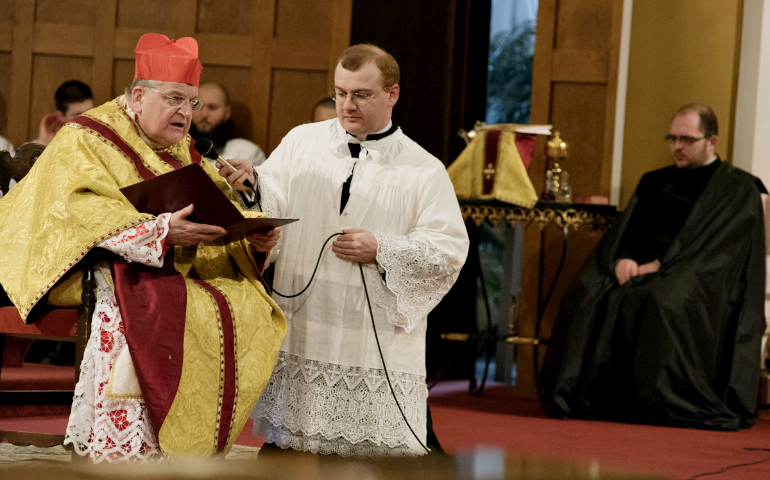 As part of his visit to the Kansas City metro area, Cardinal Raymond Burke celebrated Feb. 9 a pontifical low Mass in the extraordinary form for a congregation of nearly 400, comprising large families, Augustinian friars, 15 priests — including a Coptic protopriest — and members of the traditionalist Society of St. Pius X.

The event necessitated the temporary removal of the freestanding altar in St. Mary-St. Anthony Parish here, so that attendees could have an unobstructed view of the high altar.

The celebration marked the feast day of St. Cyril of Alexandria, the saint of the day for the pre-Vatican II liturgical calendar, and Burke used the opportunity to extol the saint's heroic virtue in defending the faith against the counsel of "many of his fellow bishops who urged him to be silent in order to maintain the façade of unity in the church."

Burke said that in the face of falsehood — even from those of high ecclesial rank — the necessary response of "St. Cyril and of all the faithful in every time and place" is to resist.

Burke mainly read the multipage sermon, which drew heavily on citations from a 19th-century source: Dom Prosper Guéranger, a French Benedictine and liturgical purist who re-established the Benedictine Rule after it was wiped out in his homeland following the French Revolution.

"When the shepherd becomes a wolf, the first duty of the flock is to defend itself," Burke said, quoting Gueranger. "Treachery like that of Nestorius is rare in the church, but it may happen that some pastors keep silence for one reason or another in circumstances when religion itself is at stake."

Nestorius, the archbishop of Constantinople, refused to use the term "Mother of God" when referring to the Virgin Mary. In 431, St. Cyril led the First Council of Ephesus in condemning Nestorius as a heretic and forcibly removing him from his see.

"St. Cyril had to have the honesty and courage to combat a falsehood even if it was being propagated by a fellow bishop supported by other bishops and tolerated in silence by still others," Burke said.

"Thanks be to God for his honesty and courage, which were the instrument of the transmission of the true and saving faith to us."

At the conclusion of his homily, Burke segued into several prayers, including this one: "Let us pray today for our shepherds, the Holy Father and bishops, that they may have the wisdom and courage to defend the faith at all times so that the flock may remain one with Christ and thus obtaining eternal salvation."

Aside from the prayer, Burke made no direct reference to any current bishops or any current controversies in the church, but that didn't stop some in the congregation from doing so.

Louis Tofari of St. Vincent de Paul, a Society of St. Pius X parish, said he found a similarity between St. Cyril's awkward position of remonstrating Nestorius and the predicament that Burke finds himself in with Pope Francis and the Holy See.

"I was really struck by the similarity, in light of what Cardinal Burke has been having to put up with at the hands of the Holy Father and having to defend a very basic principle of Catholic morality and the sacrament of marriage with this whole issue of the dubia," Tofari said. (Dubia are the formal questions that Burke and three other cardinals submitted to Francis, asking him to clarify his teachings in the apostolic exhortation Amoris Laetitia.) "Like St. Cyril, he is trying to defend the faith, but he's been ostracized from any influential positions in Rome."

In addition to St. Cyril, Burke also mentioned St. Athanasius as a defender of the faith against the heresy of Arianism, which denied that Jesus was of the same substance as God the Father.

St. Athanasius is highly revered by the Society of St. Pius X, and another St. Vincent de Paul parishioner saw parallels there as well.

"Burke could very well be the next St. Athanasius," Becky Gilligan said. "I sure hope he is a bridge for us all."

[George Goss is on temporary assignment with NCR.]

A version of this story appeared in the Feb 24-March 9, 2017 print issue under the headline: Cardinal extols saint who condemned heretic bishop.