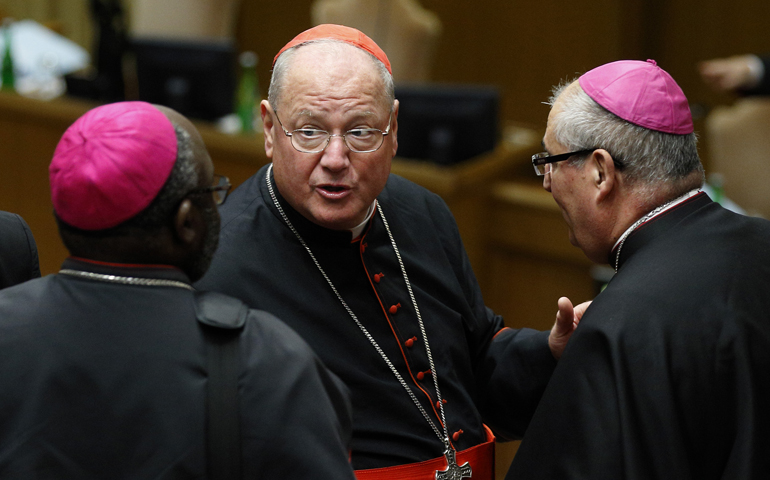 Cardinal Timothy Dolan, at the Vatican in a 2014 file photo. (CNS/Paul Haring)

New York Cardinal Timothy Dolan said Oct. 6 he hopes a new archdiocesan program to provide compensation to survivors of clergy sexual abuse will "help bring a measure of peace and healing" to those victims.

He announced the new voluntary Independent Reconciliation and Compensation Program for those who have survived abuse by priests or deacons of the archdiocese.

At a news conference, he said that while the Catholic church, and the New York archdiocese in particular, "has made great strides" in addressing abuse, "we continue to hear from victim-survivors that more needs to be done to reach out to those who have been hurt in the past."

Dolan noted that New York church officials have been working with 10 district attorneys who serve in the area covered by the archdiocese, which has dismissed clergy found guilty of abuse and put in place safe environment programs to prevent abuse.

The new program is "another step" in efforts "to respond to the past scourge of sexual abuse of minors by clergy," the archdiocese said in a news release.

The cardinal named Kenneth Feinberg, a well-known attorney who specializes in mediation and alternative-dispute resolution, to administer the new program. He will be assisted by his colleague Camille Biros.

In 2014, Feinberg and Biros led the victim-compensation team set up by automaker General Motors after a flawed ignition switch in some of its cars led to the deaths of 124 people and injuries for another 275 people. Feinberg was charged with compensating the injured and the families of those who died.

The archdiocese said it has already begun reaching out to victim-survivors who have previously notified the archdiocese that they had suffered abuse by a member of its clergy, and they have been asked to participate in the first phase of the program.

"Anyone bringing forward a new allegation will be required to follow the policy of the archdiocese to notify the appropriate district attorney's office, so that they might determine if a crime has been committed. Such allegations will also be investigated by independent professionals and examined by the archdiocesan lay review board," the archdiocese said.

To cover the cost of compensating victims, the archdiocese said it will take out a long-term loan. It "will not use money given by the people of the archdiocese to support parishes, schools and charitable works," the news release said. None of the funds to be paid to victims will be taken from the annual stewardship appeal, a new capital campaign called Renew and Rebuild or from any money given by a donor "for a specific ministry or apostolate."

Others have been named to an independent committee to oversee the new program's implementation and administration: former New York Police Commissioner Raymond W. Kelly; U.S. District Judge Loretta A. Preska, and Dr. Jeanette Cueva, an associate clinical professor of psychiatry at Columbia University and an expert in child psychiatry.

"We have been told, time and again, by victim-survivors that they are not principally interested in money, but instead are seeking some tangible sign of the church's desire for healing and reconciliation," Cardinal Dolan said in his statement.

"As this Year of Mercy nears its conclusion," he said, "it is only appropriate that we take this opportunity to follow Pope Francis and once again ask forgiveness for whatever mistakes may have been made in the past by those representing the church, even by us bishops, and continue to seek reconciliation with those who have been harmed and feel alienated from the church."