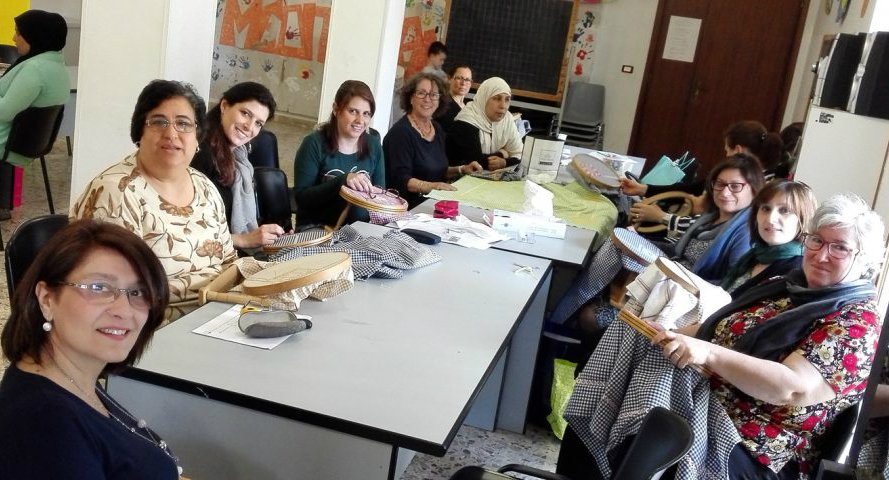 Local Sicilian and Tunisian women participate in an embroidery class once a week in collaboration with La Fondazione San Vito Onlus in Mazara del Vallo, Sicily. The “Women” project is overseen by the diocese and aims to integrate migrants into Italian culture. (Courtesy of Mazara del Vallo diocese/(Max Firreri)

Pope Francis has placed himself front and center of the refugee crisis by urging European countries, Catholics and the world to accompany migrants fleeing their countries from war and political unrest. And the Catholic church in Italy is paying attention.

From Agrigento on the Southern coast of Sicily all the way to Rome, religious communities are undoubtedly responding to Francis' message.

According to the U.N. Refugee Agency, more than one million migrants arrived in 2015 by sea to Europe -- 153,600 of whom landed on the shores of Italy. The influx of migrants from Northern Africa has slammed Sicily in particular due to its proximity to the continent.

But the religious community in Italy appears to be unaffected by the unprecedented inpouring. Instead, working both directly and indirectly with migrants arriving to Italy, they're addressing the crisis full throttle.

Jesuit Fr. René Micallef, a professor in the department of moral theology at the Pontifical Gregorian University in Rome, works indirectly with migrants. Micallef, who joined the university in 2013, developed many of his classes around migration -- including a class titled "Stranger in the Bible" -- which focuses on using Scripture to promote moral thinking.

"How does the Bible deal with the [migrant] and how can that help us think about some of the issues we have today, which is people on the move," Micallef explained to NCR in his Rome office July 19.

He also teaches courses on the ethics of immigration policy, the exploitation of migrants, and environmentally displaced persons. And he is currently writing a book about critical thinking and how it pertains to moral theology. Micallef said he hopes his students walk away from his courses with a more sensitive attitude and well-rounded outlook to the issues surrounding the migration crisis.

"Sometimes you can have priests or seminarians who are almost sort of oblivious" to the migrant crisis, said Micallef. "I have people unfortunately in the United States who think that the whole idea of social justice [and] Catholic social teaching of work with poor people is a socialist thing. This is Catholic. If you don't accept this then you're not Catholic. Some Americans have to come to Rome to discover that this is not optional."

The Central Mediterranean route is the main gateway from sub-Saharan Africa to Sicily. (NCR/Toni Ann Ortiz)

Jesuit Refugee Service, an international Catholic organization founded in 1980, works directly with migrants as part of its mission. The organization has 15 national offices in Europe including one in Rome, according to its site. Micallef, who worked with the JRS in his home country of Malta before becoming a priest, said the organization's work inspired him to join the congregation in 1997.

"We had people coming to our high school talking about the refugee crisis," he recalled. "I think if there is a way of putting together a faith which has a link to politics, one which does justice, then there is a sense of being in the church. To help others go work with migrants and to help others help them intellectually."

Caritas Italiana is also a driving force behind work with migrants in Italy, said Micallef. Caritas, an international Catholic aid agency, works with 220 dioceses in Italy "committed in their daily activities to support the most vulnerable people," its website reads.

NCR visited a Caritas center in Mazara del Vallo, a town of about 50,000 people on the southern coast of Sicily, where migrants and those in need were seen stocking up on groceries and baby food.

"We don't turn anyone away," said Lina Villani, 78, a Mazara del Vallo resident and a parishioner who volunteers at the organization every Monday and Tuesday.

Villani and five other parishioners work at the small center next door to the diocesan office to help the migrants living in their town. While migrants aren't brought there directly from the boats, Mazara del Vallo has a rich history of migrants from Tunis and Morocco and remains a destination for newly-arrived migrants.

Lina Villani, 78, a parishioner of the Mazara del Vallo diocese and a volunteer at the local Caritas center, checks off a list of food items on migrants' folders. Folders are organized by nationality and each person is entered in a database. Villani has been a volunteer for eight years. (NCR photo/Traci Badalucco)

At the back of the small center is a storage facility full of shelves filled with pasta, canned tomatoes, baby food, milk and a refrigerator full of Italian cheese. "Nothing goes to waste here," another volunteer said. "We make sure everything is used." The center also provides donated clothing to those in need.

Why do they volunteer? It's simple, they said.

"We believe in Jesus' words. We are Catholics and Christians," said Villani in Italian. "Instead of staying at home all day, we leave our husbands and we use our time to help." She's been a volunteer for eight years.

Next door, NCR sat down with Archbishop Domenico Mogavero, known to many as the "migrant bishop," to speak about the recent influx to the country.

Sicily, an island rich in culture, was conquered by the Greeks, Arabs, Romans, French, and the Spanish throughout its history, said Mogavero. This makes it a "particular" place amid the migrant crisis, he said, because Sicilians are used to living among differences.

To the Europeans opposed to bringing in more migrants, Mogavero said Italy and Europe have a long way to go.

"In comparison to the numbers in other countries, the disproportionate numbers in Italy and Europe are laughable," he said of hosting countries like Turkey that has taken in more than 2 million refugees.

According to the UN Refugee Agency, 39 percent of the world's displaced people are hosted in the Middle East and North Africa, while 6 percent are hosted in Europe.

And political movements that caution the "Islamification of Europe" are based on outdated assumptions that are "racist and xenophobic," Mogavero said.

"We still assume that it's a Christian Europe, but it's not anymore," he said, adding, "The world is for everyone."

About a two-hour drive east down the coast from Mazara del Vallo in the town of Agrigento, a group of 11 multi-congregational, multicultural sisters are building one-on-one relationships with migrants in the area.

Sisters involved in Migrant Project/Sicily work directly with migrants in the streets to provide emotional support to them. They also have a site in Ramacca, a town on the eastern coast of the island. The project, founded in 2014 by the International Union Superiors General (UISG), works with two dioceses on the island and has plans to begin work with a third.

"It's a small presence," said Sr. Patricia Murray of the Institute of the Blessed Virgin Mary and executive director at UISG. "It's the tiny drops that you put into the ocean of love" that make the biggest difference, she said. "That's the way I look at it."

Sisters of Migrant Project/Sicily in Rome in December 2015. The sisters account for eight nationalities, eight congregations and four continents. (Courtesy of UISG)

Helpers of the Holy Souls Sr. Elisabetta Flick, who oversees the project, first went to Sicily in 2014 to scope out sites and meet with two bishops in the area who welcomed the idea. While there, she met Alberto Biondo, a missionary working with migrants in Palermo. Biondo gave her a personal tour of the city and offered his own experience working with migrants.

In Palermo, the capital of Sicily and a city of almost 700,000 inhabitants, Biondo works directly with migrants who are new to the island. Biondo, 39, a member of the Comboni Lay Missionary Program, lives with his three daughters, his wife and three other laymen families in a complex run by priests. There, they host up to three migrant families.

Migrants can stay at the house for up to six months, though there are exceptions, said Biondo. The missionaries assist migrants with things like education, language courses, medical appointments, and sometimes legal assistance with their documentation process -- all free of cost.

Biondo said he plans to stay in the home another year with his family helping migrants, but his work will continue.

"To have a better world we need to get involved. We need to change our daily lives by making small choices that give meaning," Biondo said. "I can't wait for others to make changes. I have to start myself by changing my way of thinking toward that of the common good."