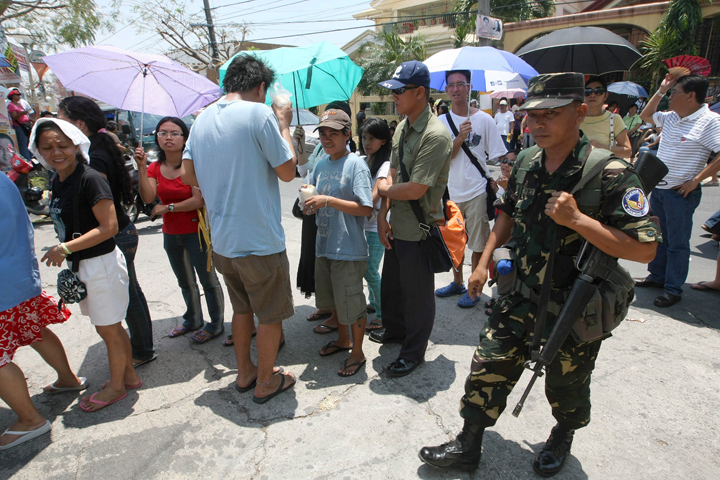 A Philippine air force trooper walks past voters lining up outside a precinct on election day in 2010 in Las Pinas. (CNS/Rolex Dela Pena, EPA)

A Philippine archbishop is urging Catholics to heed the Ten Commandments before they head to the polls in May to vote for offices ranging from president to local village councilors.

Archbishop Socrates Villegas of Lingayen-Dagupan, who is also president of the Philippine bishops' conference, said in a pastoral letter to the faithful in his archdiocese if they need help "assessing the worthiness" of candidates, they should "use the age old standard set by our Judeo-Christian tradition -- the Ten Commandments."

Villegas listed all 10, with descriptions of how they apply to picking candidates. He particularly hit on some long-running issues: corruption and the persistence of political dynasties.

Under this commandment, the archbishop also warned against voting for candidates whose families had held the same positions before them, since this would "perpetrate the family's hold on public office."

Philippine lawmakers have repeatedly failed to pass anti-political dynasty measures because a significant majority of them have relatives in politics or are offspring of public officials, while others come from generations of politicians.

Villegas highlighted certain pitfalls in calling attention to the commandment against stealing. He implored the faithful to look into a candidates' records in dealing with banks and insurance firms, big business contracts and whether they faced corruption investigations.

Also under the commandment regarding stealing, the archbishop reminded Catholics that neglecting the "environment is robbing future generations of a clean and beautiful land."

Villegas told the faithful to "see the different forms of lying," especially during the campaign period.

In the letter, the archbishop said, "Be careful in choosing leaders. I say it again -- be careful" that Catholic voters do not simply choose who has good polling numbers

"Be free from the tyranny and pressure of trends and herds. Do it right. Choose what is right according to the Ten Commandments," said Villegas.

One presidential candidate who has consistently polled in the top three of national surveys is currently facing corruption inquiries. But this same candidate opposed a controversial reproductive health law, which includes a provision for government-funded contraception for the poor -- something the church also strongly opposed. Another top-three candidate, a mayor of a major Philippine city, has boasted of cleaning up crime by killing criminals.