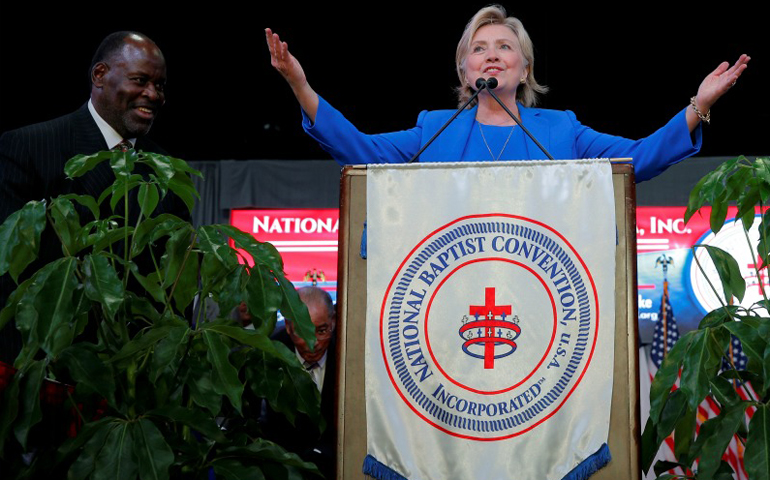 Then the Democratic presidential nominee spent a half-hour doing just that, quoting Scripture, hymns and even St. Francis of Assisi as she described her "activist, social justice faith – a roll-up-your-sleeves-and-get-your-hands-dirty faith."

"I am grateful for the gift of personal salvation and for the great obligation of the social gospel to use the gift of grace wisely, to reflect the love of God and to follow the example of Jesus Christ to the greater good of God's beloved community," she said. "That's what led me to devote my life in the ways I could to serving others."

The National Baptist Convention is one of the nation's oldest and largest African-American religious organizations.

In her speech, Clinton remembered her father kneeling beside his bed to pray and her mother teaching Sunday school. She remembered traveling from Chicago's suburbs into the city with her church youth minister to attend a black church for the first time and to hear a speech by the Rev. Martin Luther King Jr. and shake his hand.

She recounted the "hard lesson" she has taught as the occasional Sunday school teacher: "We're not asked to love each other, not urged or requested. We're commanded to love. Indeed, Jesus made it his greatest commandment."

She repeated the Methodist credo that has peppered her speeches throughout her campaign: "Do all the good you can for all the people you can in all the ways you can as long as ever you can."

"For me, it has always been about trying to live up to the responsibility described by the prophet Micah: that we do justice, love kindness and walk humbly with our God," she said.

And she drew applause and shouts, quoting words and Scriptures that have informed her belief: As attributed to St. Francis, "Try to preach the gospel always, and, if necessary, use words," and from the Bible, "Faith without works is dead" and "We cannot just be hearers of the word, we must be doers."

But it wasn't just about faith.

Clinton also praised the gun buyback program at Tabernacle Community Baptist Church in Milwaukee while pledging to support "common-sense gun safety reforms." She remembered celebrating the 60th anniversary of Rosa Parks' resistance to segregation at Dexter Avenue King Memorial Baptist Church in Montgomery, Ala., saying: "Rosa Parks may have opened up every seat on the bus. Now it's our job to create good jobs so everyone can afford the fare."

And she touted her experience as secretary of state, wrestling with the hard choices "that will drive you to your knees" with President Obama in the Situation Room.

"As president, I will be your partner in this work of translating love into action," she said.

She said Trump has "a long history of racial discrimination in his business." And she responded to his recent appeal to black voters, in which he said: "You're living in poverty, your schools are no good. You have no jobs, 58 percent of your youth is unemployed, what the hell do you have to lose?"

"People who look at the African-American community and see only poverty, crime and despair are missing so much," she said.

Clinton also spoke about the humility that she said is rarely mentioned in politics, but an important quality in a leader, admitting she'd made mistakes and invoking the words of the hymn "Amazing Grace": "It's grace that lifts us up, grace that leads us home."

"We need a president who will do justice, love kindness and walk humbly with our God," she said.