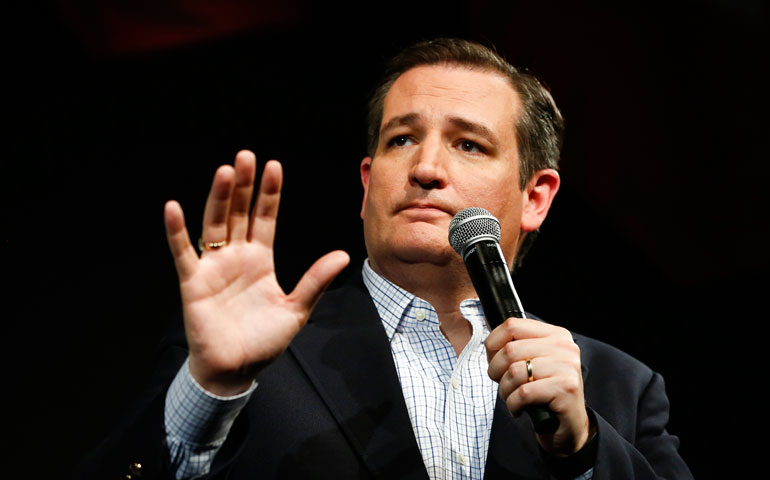 Kemper Arena has largely been replaced by the Sprint Center in downtown Kansas City, Mo., as the venue for major sporting and other indoor events. But the arena is still standing in the West Bottoms neighborhood and in 1976 it was the center of the political universe for one week as the Republican Party held its national convention there.

At the time of its construction, Kemper Arena was a marvel. It had no interior support columns holding up the roof. All the buttressing was on the outside, like a gothic cathedral, so that within the arena the sightlines were unimpeded.

This design is a kind of metaphor for the Republican Party today. It has no interior support. The "establishment" simply ceases to matter, if it even exists. The party is supported from the outside, first by conservative organizations, many of them issue-oriented like the National Rifle Association or more grassroots groups based in a given demographic, such as white evangelical voters.

This year, another exterior buttress for the party has emerged, one they have long nurtured but which now has turned on the party establishment: the angry, white male voters who traffic in nativist and racist beliefs.

To complete the metaphor, on June 4, 1979, the roof of Kemper Arena collapsed.

The Kansas City convention was the last contested Republican contest. Both incumbent President Gerald Ford and former California Gov. Ronald Reagan entered the convention just shy of the necessary delegates needed to secure the nomination on the first ballot. Ford won out, narrowly, and Reagan dutifully came on stage to throw his support behind Ford in the general election. It wasn't enough.

The Democratic candidate that year, former Georgia Gov. Jimmy Carter, beat Ford in November, proving that there is nothing so damaging to an incumbent's chances as a challenge from within his own party, a lesson Carter was to learn four years later when Sen. Edward Kennedy challenged him for the Democratic nomination, lost, but so wounded Carter that he was not able to win in the general election.

There have been many contested conventions. The most famous is the 1924 Democratic convention, which required 103 ballots before nominating John Davis for the presidency.

In 1952, Gen. Dwight Eisenhower defeated Ohio Sen. Robert Taft for the Republican nomination, but it was a close run at first, with Eisenhower garnering 595 votes on the first ballot to Taft's 500, before the delegates ratified the choice and switched overwhelmingly to Eisenhower.

And, in 1948, at the Democratic convention in Philadelphia, the entire delegation from Mississippi and half of the delegates from Alabama walked out after the party adopted a strong civil rights plank. Remarkably, although President Harry Truman lost four Southern states to the breakaway Dixiecrats in November, he nonetheless won the election against New York Gov. Thomas Dewey.

All of those conventions, however, occurred before the primary and caucus system became the dominant mode of nominating a presidential candidate in the 1970s.

We forget that when Jack Kennedy ran for the White House in 1960, only a handful of states had primaries that mattered, such as New Hampshire, Wisconsin and West Virginia. Florida held a primary that awarded all of that state's delegates to its own senator and California did the same for its governor. Only after the 1968 Democratic convention did the party adopt rules virtually requiring states to hold primaries or caucuses, and the Republicans followed suit.

The Republican primary season has been dominated by Donald Trump and by the anti-Trump forces. It took the latter too long to decide on one candidate, and by the time the other fell by the wayside, the only challenger left standing with a mathematical chance at securing the delegates needed to win the convention on the first ballot was Texas Sen. Ted Cruz, a man almost as loathed as Trump in GOP establishment circles.

Since the race became a two-person affair, it has gotten nastier, and the nastiness has been abetted by the Cruz campaign's artfully working of the delegate selection process while Trump has relied on his popularity with voters to carry him across the finish line. Trump is now openly daring Republicans to deny him the nomination if he enters the convention with a couple of million more votes than any other contender. He has a point.

This year, it seems likely that 45 percent of the Republican delegates could walk out of the convention in Cleveland. We just don't know which 45 percent it will be. Trump's fans are intensely loyal. After all, Trump is not winning primaries on the strength of his policy positions but on account of his strong personality, which rubs many people the wrong way, but a significant plurality of GOP primary voters the right way.

Cruz's supporters view him as a champion of the conservative causes closest to their heart, like religious liberty, opposition to abortion, a stricter interpretation of the Constitution. It is hard to see how these two groups, so different in interest and temperament, will come together and sing "Kumbaya" on the final night of the convention.

There are only three scenarios for the June Republican convention.

First, Trump wins the nomination on the first ballot, controls the convention proceedings, and those who loathe him stay away.

Second, Trump falls short on the first ballot and Cruz wins on the second ballot, at which point Trump claims the nomination was stolen from him.

Third, on a third, or fourth, or fifth ballot, the convention turns to someone like Mitt Romney to serve as the GOP's least bad option.

All three scenarios have one thing in common: They spell electoral disaster for the Republicans in November. Trump has alienated so much of the electorate, from women to Latinos to African-Americans, it would be hard to imagine him changing himself into a candidate with a shot in a general election.

Indeed, the exit polls in the Wisconsin GOP primary indicated that 38 percent of Republicans were "scared" by the prospect of a Trump presidency and another 20 percent were "concerned." It is hard to win a general election when a majority of your own party is scared or worried you might win.

Trump's candidacy has so dominated the contest that so far people have largely forgotten that Cruz is at the extreme right wing of the Republican Party, holds positions that are close to Trump's on immigration, and has had a tough time making himself liked by any of his colleagues. South Carolina Sen. Lindsey Graham threw his support behind Cruz, citing the need to stop Trump, but when he appeared on "The Daily Show," he got the giggles when trying to explain why Cruz would make a good president. It is hard to imagine Cruz doing much better than Trump with Latinos, or suburban women, or African-Americans.

The third scenario is the worst: parachuting in someone who did not campaign, and essentially telling the GOP primary voters that their votes mattered not at all. In this scenario, both the Trump supporters and the Cruz supporters would feel disenfranchised. No one knows what Cruz would do, but does anyone think Trump will slink off into obscurity if he is denied the nomination?

A version of this story appeared in the May 6-19. 2016 print issue under the headline: Convention scenarios spell disaster for GOP.