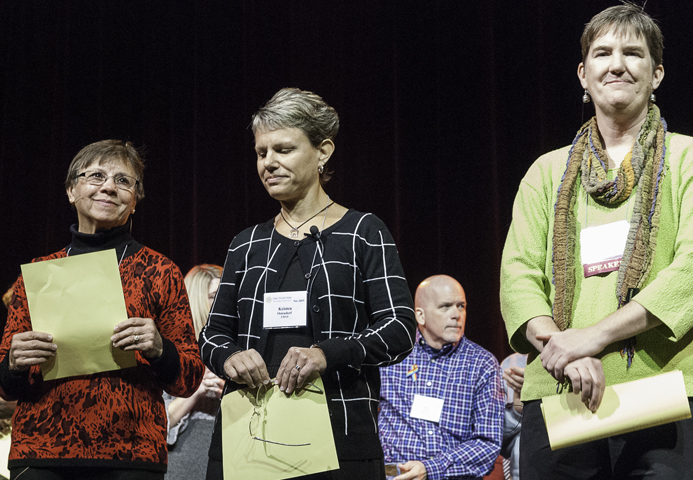 Among dozens of workshops, caucuses and keynote presentations at the Call to Action conference here Nov. 6-8, one event was especially poignant. About 30 former and active church workers, along with friends of church workers, sat in a circle and shared stories of how they and others laboring for the church have been fired, ostracized and maltreated.

The focus of the conversation and a subtheme of the conference was how church organizations should stand together to seek justice for those who devote their lives to working for the church.

"My main goal at CTA, and it's a passion of mine, is to get religious communities to stop the firing. They have the power," said Aaron Bianco, a new CTA staff member.

People spoke softly, and both anger and sorrow seemed to permeate the room. A man from St. Paul, Minn., told how his spiritual director, who had worked in his parish for 26 years, had recently been fired. Someone from the Winona, Minn., diocese mentioned that when a new bishop came in, a lot of women suddenly "were gone."

A Florida woman noted that the bishop of the Venice diocese had fired 30 people since he assumed leadership in 2007. She said the firings seem to have diminished in the last year, since 10 priests and pastors sent a letter of complaint to the papal nuncio. The letter accused the bishop of ruling "with intimidation, the use of fear, shaming, bullying, and other non-Christian behaviors."

CTA staff members Bianco and Marci Madary facilitated the conversation and had their own stories to share. Bianco, a gay man, got his first church job at 18 with a parish in Hollywood, Calif. He later worked as a pastoral associate at the cathedral in San Diego.

Bianco said he had a supportive pastor, but a wealthy donor approached the pastor when he found out Bianco was living with a man. When the bishop died, Bianco got a temporary reprieve, "but I knew, at that point, for my own well-being, that I had to move on to something else."

"I've been doing parish work for 20 years. It's my vocation," he said. "Throughout all those years, I lived in fear. If I knew I could go back and not have to be in fear, I would go in a second because I loved it that much."

Bianco said the vast majority of his time is spent with church workers who are being fired. LGBT issues are a key one, he says, but exactly whom a parish or a bishop targets can "run the gamut."

"There's pain, real pain, with real consequences in real people's lives," Madary summarized as the group session closed. "And it's not just the pain of those fired, it's the pain of those no longer being ministered to."

The declaration reads, in part:

We implore that dealings with Church workers be conducted with transparency and due process in accordance with canon and civil law. We implore dioceses to provide just and transparent arbitration for Church workers whose employment is terminated.

We implore Church leaders to uphold non-discrimination policies and to treat all employees equitably, even if exempt from such laws, in particular, marginalized people including those who identify as LGBT. …

We invite all Catholics to join us in creating Catholic workplaces (hospitals, schools, parishes, diocesan offices, affiliated organizations) where Truth is the guide, Justice the end, and Love the guiding force. Love and Justice compel us to listen to the Voice of Truth speaking even in those with whom we disagree. As people of faith, we believe this is possible.

Fr. Gerry Bechard, pastor of a parish near Detroit for 26 years, was blunt about his feelings concerning leadership problems in the church.

"When it comes down to sexuality, we're just no damn good at it," he said. "And that reflects in priest pedophile abuse problems, the church's inability to deal with LGBT issues, not accepting divorced and remarried Catholics, and a priesthood that is now dying, in terms of numbers, because no one wants to look at any of the issues that might affect that."

"Part of it is a fear of losing power, part a fear of change," he said.

Related: Call to Action conference focuses on laity’s role in reform of church and society

Margie Winters was director of religious education at a private elementary school near Philadelphia sponsored by the Sisters of Mercy. Hired in 2007, just after marrying her partner, Andrea Vettori, Winters informed her principal that she was a lesbian.

After a letter of complaint to the school board and the Sisters of Mercy and an anonymous call to the archdiocese, Winters was abruptly terminated this past June.

"It's hurtful, it's devastating," Winters said. "Both Andrea and I have had a relationship with the Sisters of Mercy for over 30 years each, so this impacts us at such a deep level. This is our spiritual family, and we've been very hurt that they would not stand with us."

Bianco still has hope for change. "There's a light on the horizon. I'm convinced of it," he said. On a recent visit to Rome, he said, about 15 bishops agreed to meet with him as a representative of CTA. A cardinal from Central America cried when he shared his story.

"There's something happening, but it has to be all of us," Bianca stressed. "When the music director is gone the next Sunday, because this is normally how it happens, we in parish communities need to say to the pastor: 'Where is he? Why is he no longer here?' "

[Tom Boswell is a freelance journalist, photographer and poet living near Madison, Wis.]